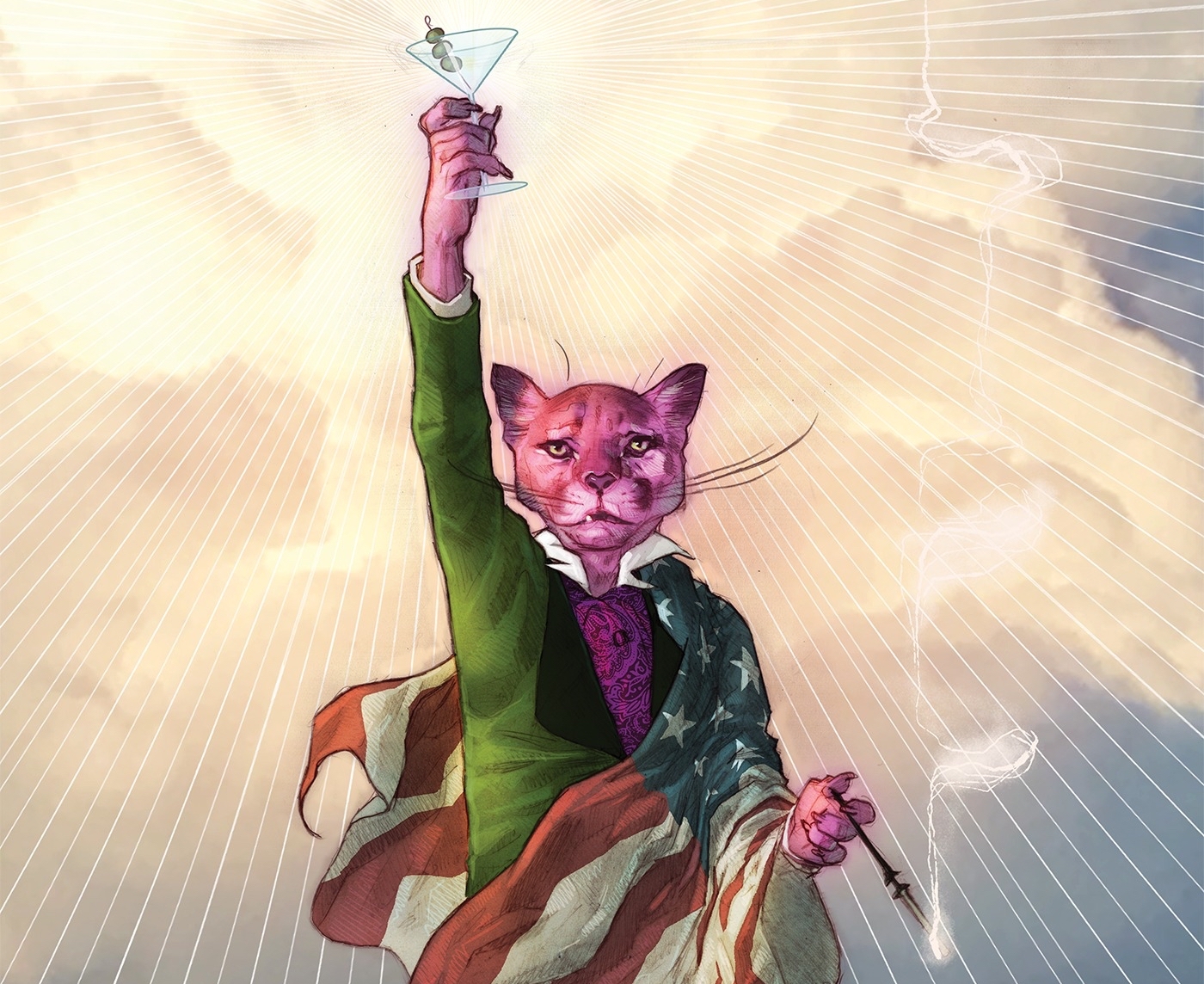 It’s 1953. The U.S. House Committee on Un-American Activities is running full steam on their public interrogations of “subversives and deviants.” Snagglepuss is a successful Broadway playwright with a secret. This is how the stage is set in the latest Hanna Barbera Beyond title Exit Stage Left: The Snagglepus Chronicles. Writer Mark Russell is at the helm following his recent success with the Flintstones reboot, and he is joined by artist Mike Feehan. This is the first of a six-issue limited series.

Issue #1 opens with a human couple (Alice and Henry) out on a date. They talk like people do in 1950s sitcoms, with exclamations like “Hot Spaghetti!” and “Oh, Crumbs!” All we really know about them is that they’re excited for the show they’re about to see. While seemingly disconnected from the larger plot, the issue continually circles back to their story and uses it as the framework for the first issue. Spliced in between their small scenes is the meat of the story.

Snagglepuss and his wife, Lila Lion, attend the closing night of his play “My Heart is a Kennel of Thieves.” There, he talks confidently to the press, and leaves after the show receiving a thunder of applause. In the car, he congratulates Lila on her performance for the press, and once she is dropped off, he orders the driver to take him to the Village. As Snagglepuss himself says: “You can only know a man by seeing the parts he doesn’t show you.”

When he enters Stonewall, we are introduced to his partner Pablo. With the TV playing live coverage of the House Committee on Un-American Activities in the background, Pablo tells Snagglepuss of his escape from Cuba. When Snagglepuss attempts to dismiss such a police state happening in America, Pablo calls him out on his wishful thinking before delivering, what is perhaps the most pointed line in the entire issue: “Every nation is a monster in the making. And monsters will come for you whether you believe in them or not.”

In the first few scenes, the seeds of the forthcoming conflict are planted. Snagglepuss is shown as a confident writer at the peak of his fame. His sharp wit and careful planning have yet to fail him. The anxieties of the outside world have yet to catch him off guard. But will his wits be enough for when the House Committee begins to take aim at him? Will they find a way to expose his secret and end his career? If the final page is any hint, they are certainly going to try.

Exit Stage Left is a thoroughly researched story set in America’s past, but it provides a biting social commentary of both our history and our present. The Alice and Henry scenes touch on the conviction and execution of Julius and Ethel Rosenberg. Snagglepuss himself channels the late Tennessee Williams, while his novelist friend Huckleberry Hound is modeled after William Faulkner. He is also revealed to be friends with playwright Lillian Hellman, as well as writer Dorothy Parker of Algonquin Round Table and Hollywood Blacklist infamy. Even Gigi Allen, the villain introduced at the end of the issue, appears to be ironically named after the controversial American singer GG Allin–but I’m only speculating on that one.

Taking a 1950s cartoon and reinterpreting it through a modern lens, with both past and present political anxieties on full display, is bound to produce some bizarre results. Russell and Feehan manage to weave together both the familiar and the weird, and present a world that is equal parts subversive, unique, and cohesive. This first issue is perfectly paced, giving just the right amount of brewing conflict and character development to whet our appetites for the rest of the series.

The Snagglepuss Chronicles #1 is available in comic book shops today!