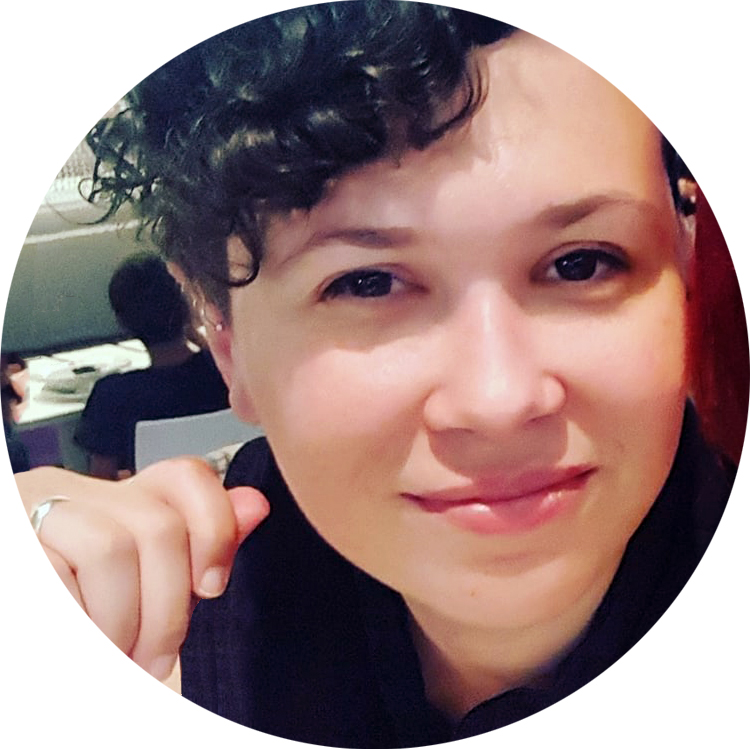 Where did the inspiration for The Deep & Dark Blue come from? What were some of the some of its artistic influences? (Was Avatar the Last Airbender one of them?)

I’m sure it was! I loved both Avatar: TLA and The Legend of Korra (and though we didn’t get to see Korra and Asami’s relationship play out in the show, the subsequent graphic novels have allowed the world and characters to be so much more openly queer and I couldn’t be happier.) More than a direct influence, though, I think it’s a matter of shared influences– the styles and pacing of Avatar and The Deep & Dark Blue are both inspired by manga and anime, stories about kids and teens saving the day while still dealing with the day to day struggles of being a kid. There’s something about that mix of adventure, sincere friendship and inventive magic that will always appeal to me. Story-wise, The Deep & Dark Blue was inspired by characters like Mulan or Alanna– girls who took new names and disguised themselves as boys to have adventures, to learn to fight and save the day. But in all of those stories, the main character went back to a happily cis, straight life– I wanted more, and I know I wasn’t the only queer kid out there who wanted the same.

The Deep & Dark Blue features one of the first cannon trans protagonists in a book geared towards younger audiences? How do you feel the landscape of kids/ young adult comics is changing in regards to queer representation?

Things have come so far since I was a kid, and it’s wonderful to see. Growing up, it was rare to see an LGBT character that wasn’t a two-dimensional stereotype, and even more rare to have that identity go beyond subtext. We still have a long way to go in many regards– particularly when it comes to diversity– but the graphic novels I’ve seen come out over the last few years give me so much hope. Young adult books like The Prince and the Dressmaker and Laura Dean Keeps Breaking Up With Me are winning awards and helping pave the way for the next generation of artists. The incredible reception that Molly Ostertag’s The Witch Boy received was part of what gave me the courage to finally pitch The Deep & Dark Blue— it looked like the world of publishing was ready, and I’m so happy I was right. We’re slowly moving beyond “coming out” stories. Authors like Sarah Searle, Melanie Gillman and Katie O’Neill are all creating wonderful queer graphic novels for kids and teens, where a character’s journey with gender or sexuality is an undeniable aspect, but it’s only one of part of a much richer and more complex story.

The comic also features one of the first nuanced non-stereotypical depictions of twins I’ve personally seen in general media? Did you take into account the fictional obsession about twins to counteract the stereotypes? How did you develop the twin siblings’ personalities?

I decided early on to make my main characters twins. The two find themselves in a situation they never expected, forced into hiding, living as girls to disguise their identities. Being side by side lets the reader see just how stark a contrast there is between their reactions– Hawke resents having to live in disguise, yearning for revenge, while Grayce blossoms. It’s the first time in her life that she’s been able to live as herself and she doesn’t want to lose it.

Since The Deep & Dark Blue is a graphic novel, the most important thing to me was that readers could tell the twins apart even if they were wearing the same uniform. There are no Parent Trap hijinks or speaking in unison, just two kids who happen to be identical. The two have wildly different personalities, and I wanted their body language to reflect that. Hawke is bold and hot-headed, while his sister Grayce is reserved; she has a lot on her mind and always thinks things through. Body language says so much about a person– a head lifted high in confidence, compared to someone who shyly averts their eyes– and I love drawing that difference.

As an LGBTQ+ artist and creator, how did you incorporate elements of your own identity or experiences into your comics?

I think most LGBTQ+ kids can relate to Grayce’s story in some way– a secret you’re not sure you can voice, that fear of feeling like you’re letting someone down, family who have expectations of you that you know you can never fulfill. I wanted to write about the strength it takes to come out, even when your hands are shaking. And I knew I wanted to write about found family, about surrounding yourself with people who love and support you unconditionally.

Do you have any projects you are working on right now and are at liberty to discuss?

I’m working on a new graphic novel for kids/teens, though this one will be a contemporary story, not fantasy. But still just as queer!

Finally, are there any LGBTQ+ authors and/or books that have inspired you and your own work? Can you recommend any titles or authors for other readers?

I listed some above, but there are so many! For graphic novels, Takako Shimura’s Wandering Son, Yuhki Kamatani’s Our Dreams at Dusk, Tillie Walden’s On a Sunbeam, Blue Delliquanti’s O Human Star, and Maia Kobabe’s Gender Queer. Ashley Herring Blake’s middle grade novels are some of my favorites from the last few years.