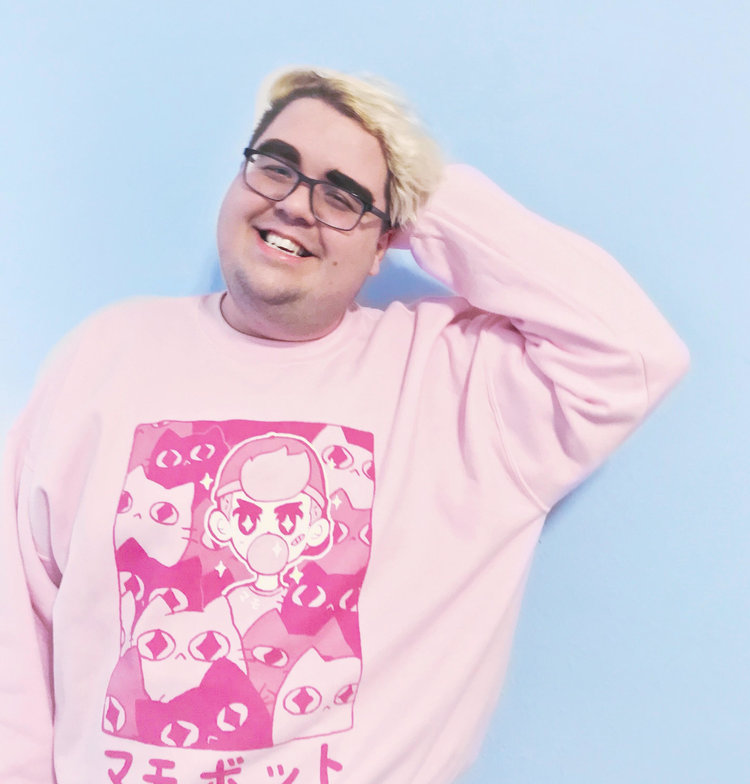 A non-binary author with a love for baking and gardening, Mason Deaver (They/Them) is the best-selling author of their debut book, I Wish You All the Best. One of the first YA books featuring a non-binary protagonist written by a non-binary author, I Wish You All the Best tells the story of Ben De Backer who comes out their parents, and deals with the consequences of that decision, as well as falling in love for the first time. Geeks OUT recently had the pleasure of siting down with Mason Deaver to talk about their new book as well as their writing process.

How and when did you come to realize that you wanted to be a writer?

It’s a story that I think a lot of authors have. You know whenever you’re younger, you write a lot of books. You take drawings and stories that you type up and you staple them, and like that’s your book. But I really got serious about it after I read Simon vs. the Homo Sapiens Agenda by Becky Albertalli. That was a book that sort of I guess kicked me into high gear about wanting to tell my own story and have something similar to that, that people could react to in the same way I reacted to Simon Vs. and Becky’s other books and other queer books that were out there.

How did I Wish You All the Best first come to conception? What were some of the original sparks?

Well, I guess you already answered that.

(Chuckles.) Well, there’s a few more things. Obviously Simon Vs., but then just wanting there to be more out there for trans teenagers. Like there was… I wouldn’t even say shortage, there were just no trans or non-binary books out there. The only one I would say I would even read at that time was If I Was Your Girl by Meredith Russo. So I saw this sort-of gap and I wanted to fill it because, you know, I can’t imagine what a book like this would have done for me when I was a teenager and confused. And so, there’s no way for me to go back in time and hand a book to myself, but if I can do that for someone who was like me, someone who struggling with things and trying to figure things out, then that is like what I wanted to do.

For I Wish You All the Best, very chaotic, because I did not plan anything out. That first draft was a 120,000 words of just a hot mess I never want to see again. Thankfully I had people who helped me along the way. Friends, critique partners, and eventually my agent and editors who helped me trim it down and clean it up. And it’s very much different from the things that I had to write after. A lot of the time a book two is a contract obligation, so you have to plan things out so that you can actually sell it. And so book two, I had to plot from beginning to end, and it’s changed a lot, but the basics are still there. And then you know, I’ve had other ideas where I just want to see what happens, just plan this out. And of course I’m writing something else now, but it’s just out there in the wind and I don’t know what I’m doing, and it’s working for now. That might change. (Laughs.)

What has the journey been like since your debut as a YA author?

Oh, it’s been very interesting. A lot of things have changed. I’ve talked with friends who are in similar situations. You know, whenever you debut it’s almost like a wall has to go up, sort of in a way to protect yourself. There are mean people out there on the interest who want to send you random emails talking about how they want to kill you, and it’s not fun.

Yeah, that was a weird morning. But there’s a lot of good things too. Like it’s definitely not been a negative process, and I don’t want to make it seem that way. It’s seeing people online and on Instagram, posting pictures of my book, and reviews talking about how even if they are a cis person how much they still enjoyed it, and if they are trans or non-binary, like how much they saw themselves in the book, and that’s just been, I can’t describe it in any other way but magical. It’s very heartwarming and it makes me feel very good about like what I’ve been able to be

Yeah, you’re actually making a difference with your words.

Yeah, and that’s like what I wanted to do, and I feel accomplished in that now and it makes me feel very proud.

So Becky Albertallli, who I already talked about her. Definitely Meredith Russo with her books, especially If I Was Your Girl. It was the first time that I saw a trans main character actually get her happy ending and what I felt that she deserved, and the book discussed and talked about her book, but it was never in a way that felt like it was…

Yeah, exactly. It felt like it was coming from a real place, a real author who has gone through these things. And then of course, you have authors like Adam Silvera, who discusses such heavy topics but in such a neat and concise and sometimes messy way that I just adore. If I had to pick three it’s definitely like Becky, Meredith, and Adam.

In the scope of LGBTQ+ literature, how do you think queer YA differentiates itself or distincts itself from other fiction?

I think that, and this is a question that I get a lot and I’m glad that I’m asked it because I’m always feel like we are at the height when it comes to queer YA. You know there’s still a lot of work to do. Queer authors of color and queer disabled authors still don’t seem to have a space and it completely sucks and we still need to fix that, but I also feel like we’ve made a lot of strides in including a lot of people, specially in queer YA. And so, you know, I think what really sets it apart is whenever you look at, say Adult fiction that’s queer, a lot of that has been on tragedy, and it does not end well. But I think in queer YA we’re finally at a place where, you know… of course a queer author deserves to tell a tragic quote, unquote tragic story.

Yeah, like Adam has every right to do that because that is his life and he has lived it, and he has the space to do that. But then on the other side you have people who are telling happier stories, like Becky Albertalli, or I would even say Shaun David Hutchinson. You know, his books are not tragedies, they end happy.

Realistic, but hopeful, and I think there’s really never been a better time for that.

Yeah, I also say that with new shows like Queer Eye, exposing that queer joy is a revolution in itself.

Like people need to see that in order to let them know they can survive and thrive in our society.

Yeah, and it’s, you know, so much of, if you go back, older again quote, unquote queer YA which wasn’t really queer, is a lot of it based on tragedy.

Like Annie on My Mind was one of the first joyful ones, actually.

Yeah, and you have books that did have trans characters, but like they died. They were killed off, they were murdered, they died of something.

Luna by Julie Anne Peters was one of the exceptions.

Yup, and it’s just very refreshing that I feel like if you are a queer teenager there’s a lot to choose from nowadays.

Yeah. There’s definitely a lot of spaces that we need improvement, and, you know, keep striving for that improvement, but I don’t think we’ve ever been better.

So this is another fun question that I don’t get very often, so I’m glad you actually asked it. But the popular thing, and I do not know exactly why, I have a hint of why, but not a hundred percent, but people seem to love the idea of Ben and Nathan being with Alex and Henry from Red, White, and Royal Blue. Which I, unfortunately, I do not think is plausible because one side of that is the Prince of England and the First Son of the United States, and my characters are just two teenagers in North Carolina.

Yeah (laughs.) Nathan would work on the next one. I do, I am a firm believer that Nathan wakes Ben up at three O’clock in the morning, and while Ben is not happy about being up that early in the morning, they will sit there and they will support Nathan with the t-shirts and the snacks and the custom flags and everything.

Ok, last question. As a debut author what advice would you give to other writers who wish to write themselves?

That it’s going to be hard, and you are definitely going to have to reach into places that may not be comfortable. That you may not feel entirely ok with showing, and that’s ok. There are pieces of the book that I wrote that maybe going back I would not include, but I’m glad that I did, because the book is very honest and I think that that is the most important thing you can be whenever you’re writing a part of yourself into a novel is that you’re honest about the things that you’ve been through, the things that you experienced, the things that you thought, and the things that you know. I really think that honestly is the key. And again, it can be so difficult to be that vulnerable and present yourself in such a way, but in the end it’s worth it because the people you are trying to help that’s what they’re going to appreciate that most.