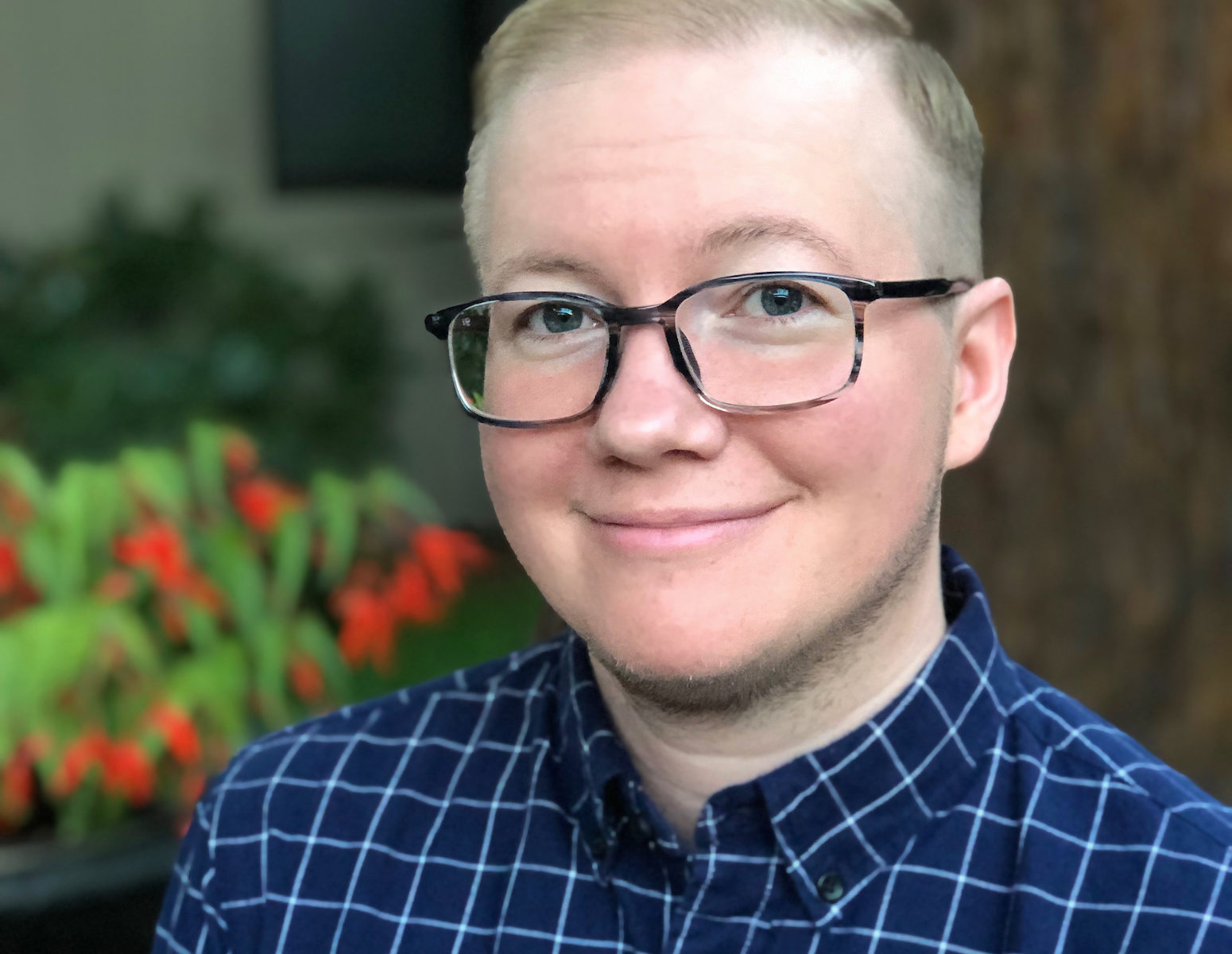 A. J. Sass is a writer, editor, and occasional mentor. A long-time figure skater, he has passed his U.S. Figure Skating Senior Moves in the Field and Free Skate tests, medaled twice at the U.S. Synchronized Skating Championships, and currently dabbles in ice dance. When he’s not exploring the world as much as possible, A. J. lives in the San Francisco Bay Area with his boyfriend and two cats who act like dogs. Ana on the Edge is his first novel. I had the chance to have a Q & A with A. J., which you can read below.

Recently, you wrote an article for TIME regarding the recent controversial statements J.K. Rowling had made about the trans community. As an admitted fan of her Harry Potter works, but not her real-life opinions, how does a queer fan reconcile their love for the series and feelings for the creator?

This has been on my mind ever since I caught wind of Rowling’s tweets, and it’s taken time for me to assess my feelings, in all honesty. The Harry Potter series helped me embrace my own identity, and I met so many wonderful friends as an active member of the fandom community. As I mentioned in the article, I even made the series an integral part of my international travel itineraries by hunting for foreign language editions to bring home with me. But it’s not as simple as divorcing the author from her creative work, at least for me. While I will always cherish what the series meant to me when I was younger, I’m branching out now and reading stories by queer authors and those who vocally support queer folks. There are so many wonderful, inclusive fictional worlds to explore.

Your debut novel, Ana on the Edge, features a non-binary Chinese-Jewish American protagonist. As a writer who is Jewish and non-binary how much of your experiences are reflected in Ana’s? Were there any concerns in portraying a character not from your own ethnic background, and what steps were taken towards creating authenticity?

Just as a note, I refer to my main character, Ana, with female pronouns because Ana hasn’t chosen a new set by the end of the story. Nonbinary people use a variety of pronouns, including male and female pronouns in some instances. In Ana’s case, she’s still exploring what feels right.

The process of figuring out my identity and the anxiety I felt when deciding how to come out to my friends and family are absolutely reflected in Ana’s story. For example, when Ana’s new friend, Hayden, mistakes her for a boy and Ana decides not to correct him, I pulled from a time in my life when I didn’t know what nonbinary meant, just inherently knew I was trans. I chose a traditionally male name and asked people to refer to me with male pronouns. Just like Ana, being seen as a boy initially didn’t feel 100 percent right, but I decided it was good enough for the time being since it was closer to correct than people referring to me as a woman.

Once I discovered what it meant to be nonbinary, everything felt like it fell into place, in terms of how I internally saw myself. Ana’s life is different than mine in many ways, but her path to embracing her authentic self is quite similar to my own in that respect. In terms of Judaism, the longstanding friendships I’ve made at various temples I’ve attended throughout my life are encompassed in Ana’s relationship with her best friend, Tamar, as are her concerns for how her religious community will react to her nonbinary gender identity.

My goal when developing Ana’s Jewish-Chinese heritage was to reflect the diversity I see in the Bay Area rinks I skate at myself. I chose not to focus on how the San Francisco Chinese-American community might view gender identity since that has always felt like another person’s story to tell. Instead, my focus was on how the gendered aspects of figure skating might impact a nonbinary athlete. At the same time, I don’t believe characters of color should or even can be divorced from their cultural heritage. I was fortunate to work with authenticity readers to ensure a sensitive and culturally accurate portrayal of the part of Ana’s heritage that differs from my own.

As a figure-skater yourself, how have you incorporated your own experiences into Ana’s story? What hopes do you have for Ana’s figure-skating generation and for the generations ahead?

Ana is definitely more talented and confident on the ice than I ever was, that’s for sure! But as a competitive skater myself, I understand pre-competition nerves on an intimate level, not to mention the sensation of unfamiliar ice at a rink you’re skating at for the first time and the pressure to perform well and justify years of money spent on training. These were all elements from my skating background that made its way into Ana’s story.

My hope for kids Ana’s age is simple: I want every skater to feel safe and comfortable being themselves, on the ice and off. It’s already starting to happen, thanks to brave trailblazers who’ve come out during their Olympic-eligible careers, like Eric Radford, Adam Rippon, Timothy LeDuc, Karina Manta, Joe Johnson, and Amber Glenn. These skaters and others are paving the way for a new generation of skaters.

How would you describe your writing process? What elements and techniques would you say you incorporate into your craft?

My writing process is honestly something I’m still trying to pin down since it seems like I approach each book I write differently. Ana on the Edge came out in a flood of words during the spring of 2018. It wasn’t perfect by any means, but Ana’s story felt like a natural extension of myself that my wonderful agent and the fantastic editorial team at Little, Brown Books for Young Readers helped make even better.

Outlining was one strategy I used for Ana that I hadn’t tried with previous manuscripts. I also learned about Save the Cat! beat sheets. Traditionally a screenwriting technique for honing plot and pacing within the context of the three-act structure, I found it helpful in laying out my already-written scenes and seeing where they might fit if Ana were a movie.

Queer figure-skating and ice-sports related media has increased in the past few years from Tillie Walden’s Spinning to Ngozi Ukazu’s Check, Please! to Sayo Yamamoto and Mitsurou Kubo’s Yuri!!! On Ice. Is there any figure-skating media you admire and/or relate to?

I love Spinning and Yuri!!! On Ice (and definitely want to take a look at Check, Please! now that you’ve tipped me off to it). I admire what the wonderful people at Skate Proud (website | Instagram) are doing in featuring queer athletes around the world in both figure and roller skating. In addition, it’s always a treat for me to sit down and watch the videos produced by On Ice Perspectives (website | Instagram). The founder films skaters up close and personal, in skates and on the ice himself. It makes for an incredible viewing experience.

Aside from figure-skating and writing, what activities do you enjoy doing in your life?

This probably comes as no surprise, but I’m an avid reader. I’ve always loved middle grade and YA, plus memoirs and biographies of historical figures, and I’ve recently fallen in love with picture books. Additionally, my boyfriend and I are avid travelers (or were, in pre-pandemic times). One of our favorite things to do is decide on our next vacation destination, then figure out the most affordable way to get there so we can experience all the location has to offer. Since our travel plans are postponed for the foreseeable future, I’ve doubled down on my attempts at language learning. Mandarin is my latest challenge. I studied a handful of languages in high school and college, so I’ve also been trying to refresh my memory on some of them, specifically Arabic, Hebrew, and French.

As a writer, what advice would you give to others, especially other queer writers, who are just starting out on their journey?

When I first thought about becoming a writer over a decade ago, there weren’t many queer authors or stories I could look to for inspiration. The landscape is quite different for queer writers today. Everyone from my agent to the team at Little, Brown Books for Young Readers has welcomed me (and Ana) with open arms and boundless enthusiasm.

But before Ana sold, and before I connected with my agent, it was the online writing community that encouraged me and kept me going. Twitter is a great place to find support and critique partners, especially if you’re writing in the kidlit space (which encompasses picture books, chapter books, middle grade, and YA).

It was on Twitter that I also first learned about mentorship opportunities, programs where an agented or published author works with a pre-agented author to revise their manuscript in preparation to query agents. I was a #WriteMentor mentee in 2018, and the friendships I made with some of the other mentees and mentee-hopefuls remain strong to this day. My biggest piece of advice is to find your community, whether it’s online or off. Let your fellow writers cheer you on and give back to others as much as possible.

Finally, what are some LGBTQ+ comics or books you would recommend to the readers of Geeks OUT?

Oh gosh, do you have a free afternoon? There’s so much great LGBTQ+ content out there, I could talk about it for hours.

One online comic that I dearly loved and related to when I was figuring out my identity is Tab Kimpton’s Khaos Comix series. Tom’s and Alex’s stories were the first portrayal I’d seen of a relationship between a transgender boy and a cisgender boy, and it meant so much to me, as someone who is transmasculine/nonbinary and gay.

Other queer graphic novels I’ve read and enjoyed recently are Mooncakes by Suzanne Walker and Wendy Xu (a YA Fantasy that also has great Jewish and disability rep!) and The Deep and Dark Blue by Niki Smith (a middle grade fantasy featuring a trans girl and her supportive twin brother).

2020 has been rough on the whole, but one bright spot is how many fabulous LGBTQ+ books have recently released. Here are a few of my favorites that Geeks OUT readers may enjoy:

Pet by Akwaeke Emezi: speculative fiction at its best, featuring a trans girl main character as an organic part of the narrative

The Deep by Rivers Solomon: a lyrical fantasy novella (I also highly recommend Solomon’s SFF debut, An Unkindness of Ghosts).