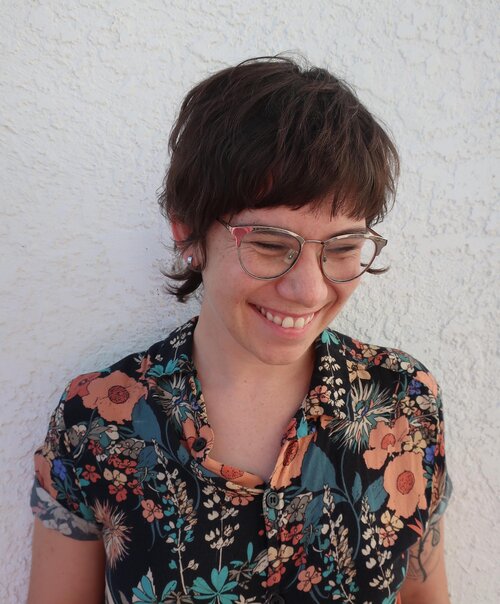 Molly Ostertag is an Igntaz and Prism Award winning graphic novelist and author of the Witch Boy series from Scholastic. She also writes and designs for TV animation. She lives in Los Angeles with her wife and pets, where her hobbies include cooking, camping, and thinking about hobbits. I had the chance to interview her, which you can read below.

When or how did you first realize you wanted to create and draw cartoons and comics for a living?

I started out wanting to write novels, because I was the kind of kid who read everything I could get my hands on and spent most of my childhood acting out stories I made up. But I loved to draw (like every kid does, honestly) and got enough encouragement that I just never stopped drawing. In high school a friend introduced me to Neil Gaiman’s SANDMAN series, and I realized comics didn’t have to be about superheroes – they could be a way to merge my love of storytelling and of drawing. I feel really lucky that I entered the industry during a huge boom in kids’ comics (thanks, Raina Telgemeier and Dav Pilkey!) and that I could make an actual career out of drawing graphic novels!

What were some of the first stories that inspired you as an artist growing up and what stories inspire you now or continue to inspire you today?

There were a ton of (mostly young adult) novels that really shaped me as a storyteller – authors like Tamora Pierce, Diana Wynne Jones, Diane Duane, Susanna Clarke, and Ursula K. Le Guin were huge for me. More recently, I’ve been enjoying Tasmyn Muir, N.K. Jemisin, Octavia Butler, Jeff Vandermeer, and Madeline Miller. I’ve also been doing a sort-of embarrassing deep dive into my preteen love of Lord of the Rings, and finding a lot of new inspiration and interest in that classic story (did you know that it’s like, SUPER gay?).

Previously, you had paneled for an event at Flame Con, a queer comic con sponsored by Geeks OUT, on “Telling All-Ages Queer Stories.” Can you talk about your work and personal motivation creating inclusive stories for young queer kids, like Witch Boy?

It’s really important to me! I came out at the ripe old age of 24 (I’m kidding! But it felt old at the time). I grew up in a liberal environment, but the 90s and early 00s were still deeply lacking in gay representation in film and books. Gay men were usually a joke, lesbians existed entirely for the male gaze, and any other identity was barely mentioned. I just didn’t know it was a real option for myself. Each piece of work I make for kids that features queer themes is a way to push back against that – to show young people that there’s a huge world of queerness out there, and to show how exciting and wonderful it is to be yourself. ‘Being yourself’ and ‘listening to your heart’ are very over-used morals in children’s media, but when you put them in the context of queer stories they gain new power.

Relating to such, as a writer for Dana Terrance’s hit show, The Owl House, you had the opportunity to write some pretty major episodes, including “Enchanting Grom Night” and “Wing It like Witches.” What was that experience like, writing canonical LGBTQ+ representation on Disney into existence?

It was very exciting! I had worked for Disney TVA in various capacities and had always tried to push for better queer representation (‘better’ here meaning ‘literally anything’), but this was my first job as a writer. Dana had a vision for these characters and when I expressed how much I love writing romance, she assigned me the Grom Night script. It’s been heartening to see Disney realize that there’s no reason a story featuring a same-sex crush shouldn’t be on their network. That’s thanks to a lot of hard work from people behind the scenes, as well as all the other shows that made strides in this area (Steven Universe, Adventure Time, She-Ra, Korra – we build on what came before).

By the time I was writing the episode, the process went really smoothly. It was a dream to get to tell the story of a nerve-wracking high school crush (in the context of battling an ancient fear demon) and the reaction to that episode and to Wing It Like Witches was awesome.

Your partner, Noelle Stevenson, also a former panelist at Flame Con, is a creative influence in comics in her/his/their own right. How did you two first meet and would you say your creativity as artists sometimes bounce off each other?

The one time we tabled together at Flame Con (2018, I think?) was SO fun, because we initially met at conventions and so they’ll always have a special place in our relationship. We knew each other from cons, and Tumblr, and from both being in art school and making webcomics at the time. It wasn’t until I moved across the country that we started actually dating (after a lot of coming out drama, some of which Noelle wrote about in their gorgeous memoir The Fire Never Goes Out) and now we’re married and very happy!

It’s truly amazing to be with someone so brilliant and creative. I feel like I’m always scrambling to keep up with Noelle’s giant brain (in a good way; I hope the feeling is mutual) and we bounce ideas off each other constantly. There’s some of me in She-Ra, and some of Noelle in the Witch Boy series, but being in constant conversation means that our voices have been able to diverge and grow and be strengthened by one another. Noelle is incredible with characters and humor; I’m good at world building and story structure; and we’ve both learned a lot from each other in the last five years. I feel lucky every day.

I talk about this incessantly, but I would LOVE to travel to Middle-Earth and hang out with some hobbits. Hopefully in this scenario I would also be a hobbit, or else the height difference would be a problem when they inevitably invited me over for elevenses, followed by luncheon.

As a creator, what are some tips you can give to people regarding how to break into the industries (comic books/animation) you occupy? What advice would you give for those who are struggling with inspiration or figuring out how to keep going?

For me, becoming a good artist is about pursuing the stories and art you love. It’s about honing in on what makes your voice unique, feeding your interests, and learning the craft of how best to communicate your story to others – whether that means studying writing, or story structure, or drawing, or anything other form of art.

Being a good artist with a distinct voice is important to break into these industries, but I always have to note that systemic privilege plays a big, frustrating role. The world of comics and animation are slowly getting better at bringing in underrepresented voices, but there are many issues.

Generally, here are some practices that have helped me most in my career: forming connections with my peers, elevating and celebrating their successes, and sharing information with them. Being vocal about what jobs I want, and being ready to leave when I outgrew them. And finally: consistently making work I’m passionate about and sharing it, even when it isn’t perfect, and even when I have to self-publish and self-distribute.

Are there any projects you are working on at the moment and are at liberty to speak about?

I’m really excited about my upcoming graphic novel, THE GIRL FROM THE SEA (Scholastic, June 2021). Morgan, a 15-year-old lesbian who lives in Nova Scotia, has a plan to stay closeted until she can go to college; that is, until she meets Keltie, a selkie girl from the sea with some secrets of her own. It’s a very personal story – it explores the transformative power of queer love, and the fear of coming out and being known, in a way that’s really close to my heart. From the setting, to the fashion, to the sweet romance scenes, it was an absolute joy to draw and I hope people enjoy it!

Finally, what are some LGBTQ+ books or authors you would recommend to the readers of Geeks Out?

Song of Achilles by Madeline Miller – an aching retelling of the romance between Patrocles and Achilles.

Laura Dean Keeps Breaking Up With Me by Rosemary Valero-O’Connell and Mariko Tamaki – a gorgeous graphic novel about high school love and heartbreak.

My Lesbian Experience With Loneliness by Kabi Nagata – a searing, vulnerable graphic memoir about sexuality and mental health.