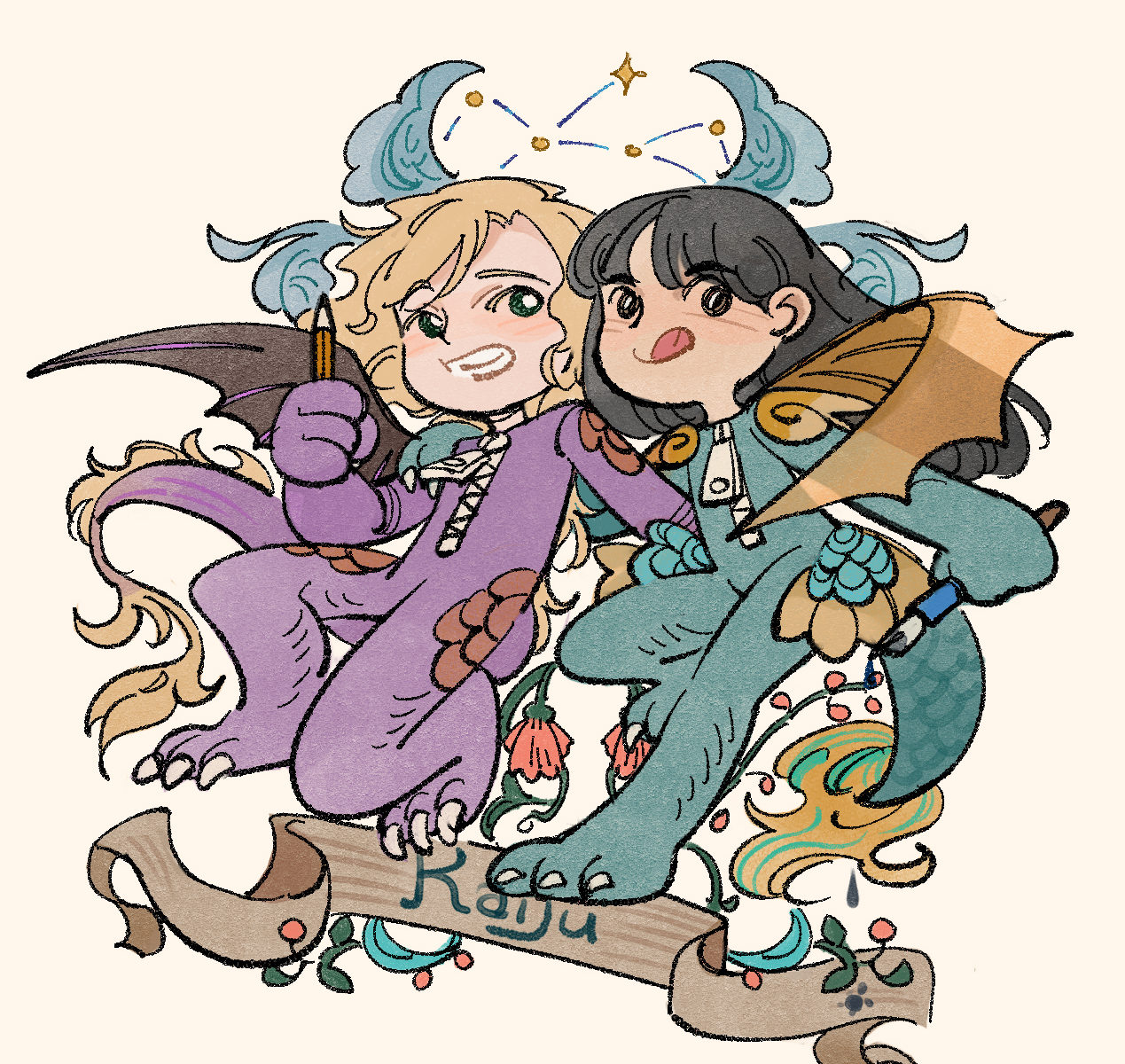 Jen Xu and K. Rhodes, also known as KaiJu, are a couple of comic artists working together to create projects close to their hearts. They are SVA graduates and debuted with Chromatic Press in 2014 with The Ring of Saturn. Their next work, Mahou Josei Chimaka, won a DINKy award in March of 2016. Their short comic Inhabitant of Another Planet, was also nominated for a DINKy the following year. The two-headed monster is currently working on their webcomic, Novae, and their middle-grade graphic novel duology HAVEN and the Fallen Giants. I had the chance to interview KaiJu, which you can read below.

What does the title, Novae, mean? What drew you to this word, and did the story evolve from the title or vice versa?

KaiJu: When we were first starting to write Novae, we didn’t have a particular title in mind. We were calling it the very wordy “The Necromancer and the Astronomer’s Apprentice” for the longest time before deciding on Novae.

Novae means a nova within a binary star system. It’s a phenomenon where one star becomes bright due to an explosion of energy taken from another star. We thought it was a fitting title for our story—as it revolves around two characters that become “locked in each other’s orbit”, and bring brightness into each other’s lives.

Your name, KaiJu, is both a play on Japanese mythology and your names, correct? How did KaiJu come to be and how would you describe your collaboration process together?

KaiJu: Yes! Though the word kaiju is more associated with the Japanese film phenomenon nowadays than mythology. The word carries the meaning of strange beasts, sometimes used to describe dinosaurs in the early 1900s.  We were trying to combine our names into something coherent and we kept landing on KaiJu. It just seemed like a cute idea. We like to think of ourselves as a two headed creature that creates worlds, instead of destroying them.

As far as how our collaboration process goes. We write the script together. We each take on the persona of different characters in the dialogue. It’s a really fun way to write since we never know how the characters might react to each other during the drafting process. We also each storyboard different pages, and pencil our own set of characters. Kate does backgrounds and color, while Jen inks. We get a lot of help from our assistant color flatters as well. It’s very much a collaborative project from start to finish.

In a field like historical fiction, which has been noted for its absence of people of color (as well as LGBTQ+ characters in an era where queer language hasn’t evolved the way it has today), how did you develop the diversity as seen in Novae? What resources did you consult for historical/cultural accuracy?

KaiJu: We borrowed quite a lot of books from the library when we were first writing the script for Novae, and it’s prequel Inhabitant of Another Planet. A particularly useful title was In the land of the Christians, which is a collection of Arabic travel writings from the 17th century. However, the information on people of color and LGBTQ+ individuals was very limited from what we could gather. We try to be as accurate as we can, but in the end the character’s experience is very reliant on their individual circumstances.

As you mentioned, queer language had not evolved the way it has today, so it’s hard to make a direct linguistic correlation between a persons identity and our modern terminology. But of course, LGBTQ+ folks still existed and felt the same way many individuals do today.

Novae leans towards alternative history, so we don’t intend for it to be a perfectly accurate representation of historical figures or events. Though, we do try to incorporate some historical events in a way that suits the narrative of Novae.

We hope that Novae reflects the diversity that has always been present in history. In truth the lack of diversity in historical fiction is an inaccurate representation limited by narrow perspectives. Though ultimately, the idea of “accuracy” should not limit representation. No one should feel like they have to justify the inclusion of LGBTQ+ and POC characters.

Within the comic, one of the main characters is revealed as mute and shown to communicate nonverbally using a combination of Tactile fingerspelling and sign language. What kind of research do you implement in creating a character with this type of disability in this time period?

Jen: For Sulvain’s character, I looked up articles about non-verbal individuals and how they communicated with their loved ones before established sign language. I found that personalized sign language, writing and fingerspelling were a common way to communicate during the 17th century. For Sulvain’s sign language I watched a lot of Instructional videos on ASL and other world sign languages. Then I mixed and matched to make something representative of Sulvain’s experience. I plan on finding an ASL adviser as Sulvain uses more sign language.

What are some of your favorite elements of webcomics/graphic novel medium? What craft elements/techniques stand out to you the most?

Jen: I love how the visual elements of webcomics/graphic novels convey emotions and freeze moments. It’s different from film and other forms of visual media, that it allows the readers to absorb these moments in their own time. For example, a contemplative scene in a film plays for five seconds— and the scene changes. But with comics, I can choose to dwell on a panel, on a page, or on a scene for as long as I like and really experience the content at my own pace.

I think comics give you the ability to inhibit space and the minds of the characters, allowing emotions to brew.

Kate: I love the drama that can be conveyed in comics. I also love that the nature of the medium, the ability to create without a big budget, allows you to pursue big ideas with a smaller audience. I love to see the unbridled creativity that comes purely from an individual’s brain.

Techniques that really stand out to me are paneling and framing, and the ability to draw an emotion out of a reader through expressions. I love it when I can immediately feel something just by looking at a few panels.

Are there any other stories (whether already published or upcoming) fans of Novae could check out from you?

KaiJu: Yes! We have the prequel for Novae called Inhabitant of Another Planet as well as some other short stories you can find on the Novae website’s about page.

As far as upcoming work, we have a middle-grade graphic novel called HAVEN and the Fallen Giants slated to come out with Viking Children’s in 2022. It’s a silk road inspired fantasy adventure with a good mix of fun world building and confronting important social issues.

KaiJu: Oh gosh, we read quite a lot of LGBTQ+ comics that are really great but we’ll highlight just a few here.

We really love the energy in Sammy Montoya’s comics. Sammy does a lot of shorter comics and they’re very addicting. They’re great at pulling the reader in right away and making the characters and conflict very engaging.

You can find some of Sammy’s comics here

Cunning Fire by Kaz Rowe is a great example of a LGTBQ+ webcomic that focuses both on character relationships, as well a complex urban fantasy plot. Kaz uses a lot of great cinematic techniques that are really fun to read. You’ll definitely find yourself rooting for the characters.

Castle Swimmer by Wendy Lain Martin has great world building, characters and spot on humor. If you’re not reading it already you have to check it out.

Tiger Tiger by Petra Erika Nordlund is a super creative and intriguing fantasy comic set on the high seas. Every visual detail in Petra’s comic is a delight.

If you’re looking for a really sweet comic with a healthy relationship that also features a partially nonverbal character, you should definitely check out #Muted by kandismon.

You can read it here

My Broken Mariko by Waka Hirako is a incredibly well done and heartbreaking manga that just came out recently. I’m not sure if this one is considered LGBTQ+ but I think it can certainly be read that way. It’s worth checking out just to marvel at the emotional power of Hirako’s work.

There are many more we would love to talk about but these are the ones we’re currently reading.