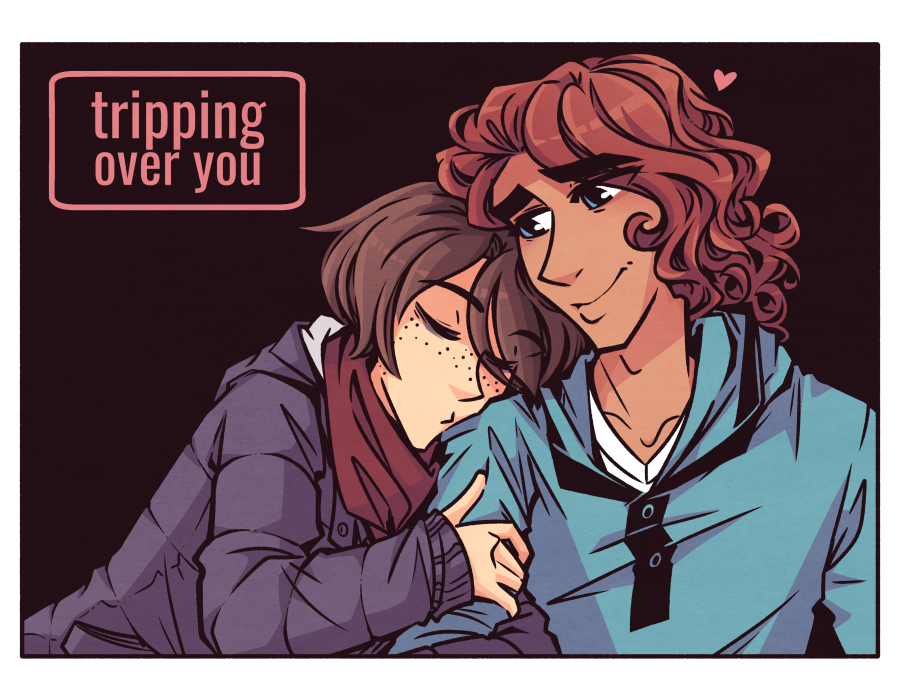 Suzana and Owen are a married lesbian couple who love world-building, character-making, and story-telling together. Tripping Over You is their current ongoing webcomic, and their attempt to fold all of those shared interests and passions together. I had the opportunity to talk to them, which you can read below.

Suzana and I have been making original characters to bounce off of each other since we were kids, long before we started dating. We’ve always been interested in writing together, pitching each other ideas for how so-and-so’s relationship would go, making little gift arts for each other of each others’ character— it just sort of snowballed into webcomic-shape after we started dating and moved in together. We keep making pages because (we’re addicted) it continues to be really satisfying to finish just one more page; it feels like giving our characters a couple more seconds of existence with every update.

Both of you are collaborators on this comic as well as wives. How would you say the romantic partnership has reflected/ affected on the artistic partnership and vice versa?

We started dating a couple years after we made Milo and Liam, and then (on a whim) started making a webcomic shortly after we started dating. It’s really hard for me to imagine what our life would look like without the comic being part of it. It’s true that a lot of how our characters relate to each other has flickers of what our actual relationship once felt like, but I think the real takeaway for us goes the opposite direction: making stuff together has improved our ability to communicate with each other.

We’ve basically crafted this perfect excuse to practice expressing to each other what each of our individual goals are, and then to try to figure out how to accomplish as many of those goals as possible without taking away from the other person’s goals. That’s given us a really solid framework to build on when it comes to talking to each other about what we both want out of our personal life together, too.

TOY has been running on a digital platform since 2011. How do you find yourself drawn to web comics and What do you think are some of the benefits of this medium?

Webcomics were some of the first things we ever found as we were first stumbling around the internet as kids back in 2000. Suzana and I used to send each other links to new comics we’d find, or yell at each other to go catch up on an old favorite after they’d posted a particularly exciting update. It’s just so compelling to follow something that’s so indie-made, where the story and art is directly handed off from creator to reader. You get to watch the art and the story improve over time— and you get to see what kinds of stories people make when they’re being really self-indulgent. It’s all really authentic and sincere and fun.

One of the loveliest things about TOY in my opinion is the progression of the main characters’ relationship, seeing how they evolve in their relationship with the world and each other. How did you keep the balance between maturity and light-heartedness when creating this queer narrative?

This means a lot to me, specifically because I feel like I really struggle with this. I’m not sure I always keep this balance in a way that’s masterful, despite it being one of my biggest goals to improve at it as much as I can. I’m one of those people who will enthusiastically explain my joke if no one laughs— even to a chorus of groans and eye-rolling. It’s definitely a forever thing, developing more mindful ways to think about this particular puzzle. I do find that it’s really helpful to read pages out loud to myself, to see if it sounds like what I intended for it to sound like. Getting feedback on what lands (and what doesn’t) is really helpful, too – which is cool, because that’s sort of naturally built into the webcomic format.

Nearing the end of TOY, what sort of stories do you think you might be working on in the future?

We have a sequel to TOY lined up to start at the end of the chapter we’re working on now (with a fun little time skip between them), which we are deliriously excited about lately. We’re also working on launching an adult queer comic with Slipshine this year. We also have some fun (very silly, very meta) plans for some of Liam’s stories once we get into exploring his career in writing.

What advice might you offer for hopeful creatives out there?

Something I remind myself daily, especially when I find myself hitting a wall: you may not feel like you’re good enough yet to work on that dream project you’ve been chewing on, but I promise that’s not a bad thing. You’re allowed (and entitled!) to make whatever you want, even before you become as good at it as you’d like to be. Plus: there’s always going to be someone out there who your stuff means a lot to. As long as you make something you care very much about, some people will sense how much you care, and they’ll care too. Please, please make stuff. I personally want to read more things like that!

Here’s some of our absolute favorites! Some are completed, some are ongoing, and some have adult content:

The Less Than Epic Adventures of TJ and Amal

Go Get A Roomie

The Quick and Dirty Life of Fritz Fargo