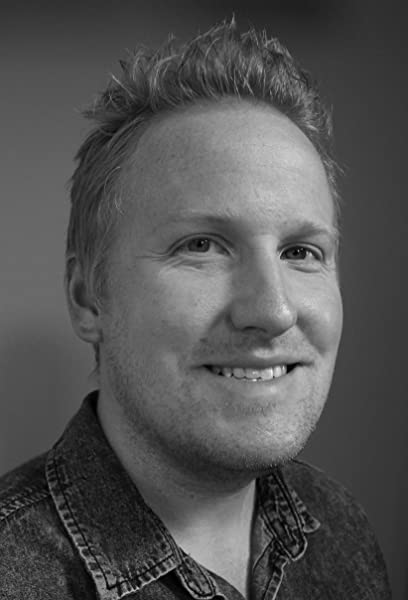 Preston Norton is bisexual, slightly genderqueer, and married. His partner, Erin, is trying to put him on a diet, and he’s revolting (both contexts apply). He has taught seventh grade and ninth grade English, mentored drug addicts, and mowed lawns (in no particular order). He is obsessed with 2001: A Space Odyssey and Quentin Tarantino.

I had the opportunity to talk to Preston about his new book, Hopepunk, which you can read below.

First of all, welcome to GeeksOUT! Could you tell us a little about yourself?

I’m an environmental science teacher at a youth retreat facility where local private schools send their fifth graders to us for a week, and we teach them how to not fuck up the planet. (So, big Greta Thunberg fan, obviously.) When I’m not doing that, I’m writing. I’m also a nerd for lots of things: from high literature and pretentious, artsy cinema to dorky anime and video games. It’s less a question of “What am I a nerd for?” then “What am I not a nerd for?” What can I say? I like things.

How did you find yourself becoming a writer? What drew you to young adult fiction specifically?

I’ve wanted to write for about as long as I can remember. (I remember attempting to “write a novel” as early as eleven years old? I did not get far.) But the thing that draws me most to YA lit is voice, and how these young protagonists tend to feel a lot of things and very often. I am a thirty-six-year-old adult person, and it just so happens that I too feel a lot of things and very often, and I tend to get very voice-y about it. I don’t know what else to tell you other than YA lit and I tend to be a great fit together.

What can you tell us about your upcoming book, Hopepunk? Where did the inspiration for this story come from?

It’s a story about rock and roll! And science fiction! And westerns! It’s also a story about social justice, and fighting for what you believe in. But at its deepest core, I think this story is about unapologetically being yourself. It’s about loving people and loving things. It’s about being a nerd, and being queer, and being a sister, and being a friend. But also punk rock! And sci-fi! And superhot cowboys, yee haw!

Hopepunk contains a strong music theme in its rocker elements. What music would you say you’ve gravitated to while writing this book and in general?

I mention a lot of songs and artists in the novel itself, and I don’t know that I would add any others to that already extensive list. But if you’re asking what I like generally, well: my favorite song of all time is “Wide Open” by Chemical Brothers, feat. Beck. My favorite artist of all time is Radiohead. (Favorites include “How to Disappear Completely,” “Reckoner,” and “Burn the Witch.”) My current passing musical obsession right now, which tends to fluctuate on a dime, is a tie between Superorganism (“Something for your M.I.N.D,” “Everybody Wants to Be Famous,” and “Hello Me & You”) and King Gizzard and the Lizard Wizard (“Catching Smoke,” “Interior People,” and “If Not Now, Then When?”) Also, while I would not consider myself the most “metal” person in the world, I do have tickets with my partner and friends to see Tool this February. It’ll be the first concert I’ve been to since Nine Inch Nails and Soundgarden toured together, back when Chris Cornell was still alive, may he RIP.

With that said…I issued an unofficial “contest” of sorts in an interview I gave to BookPage, and I would like to issue that same contest/challenge here. In Hopepunk, Hope Cassidy and the Sundance Kids perform a number of songs—completely original works of my own creation. However, I really struggled to write the third and final song, and as such, sort of cheated and had to use a pre existing song as a model for writing it, from the lyrical beats and the time signature down to the tune that you do not hear but was very present in my head. The first reader who calls me out on Twitter (aka, tag me) with the song I used as a crutch, I will use your name (or a name you give me) and give it to a minor character in my next book. The contest begins NOW!

An interesting part about the book was discussing the ripple effects of homophobia, how it not only affects the queer characters in this book but also those who love them, as it does the titular protagonist who initially loses her sister because of it. Would you mind speaking about that?

I grew up in a very religious household/community, so my experiences with and proximity to homophobia has always been very close and personal. I think the homophobia that hurts the most is the kind that pretends it is not homophobia at all but rather “Christlike love.” The sort that says, “I love you, but everything about who you are is a sin and wrong.” I am not a religious person anymore, and no longer feel the need to sugarcoat how I feel about this sort of belief, which is that it is fucked up, and I fucking hate it. I truly hope Christianity as a whole learns and evolves past this primitive, hateful stance.

I drink the caffeine, and then away we gooooo!!!

I consider myself very lucky, the writing process comes so easy and fluid to me. Not only that, but my brain often delivers a high serotonin and even dopamine-reward for my efforts, so when I’m actively writing, it is often the most enjoyable thing I do with my time. Outside of the actual writing process, however, things are tough. Selling my agent on a new book idea, for example. Selling my editor on a book idea that I finally got my agent on board with. Writing a synopsis! Fucking hell, you guys, I fucking hate writing synopses.

Growing up, were there any books or authors that touched or inspired you as a writer, or made you feel seen?

You know, as voracious of a reader as I was when I was younger, I maybe didn’t find those books as a child/teenager so much as I have found them as an adult. A little late now, but they do continue to shape me and my writing. I would argue that the most profoundly influential ones were Okay for Now by Gary D. Schmidt, Looking for Alaska, and The Perks of Being a Wallflower, the latter of which, I actually like the movie even more than the book, which was incredibly both written and directed by its author, Stephen Chbosky. No, I have not seen Chbosky’s newest, the film adaptation of Dear Evan Hanson. I’ve never heard the word “cringe” used so often in reviews.

Hopepunk is defined as a subgenre of fiction that looks at dystopia and the world with an element of resistance, optimism, and well… hope. Where did you first encounter this world and why do you think you were pulled to use it as the title, if not the basis of your book?

You know, it’s funny because I did not hear about it until a book blogger on Twitter compiled a list of their top five “hopepunk” novels, and one of my previous novels, Neanderthal Opens the Door to the Universe, made the list. Upon hearing this unfamiliar word, I sort of fell down the rabbit hole of hopepunk’s birth as a subgenre, at which point I realized that hopepunk was definitely my favorite subgenre, and I had only just learned about it! Naturally, I became obsessed, not just about the genre but what it stood for, and what it said about the times we were living in. My natural state is to start thinking about book ideas and plots without even realizing that’s what I’m doing, so the cogs were already turning at this point, and it was almost inevitable that the next book I would write would be called “Hopepunk.” The trick was selling both my agent and editor on the idea…and hey, they both loved it!

Aside from being a writer, what are some things you would want others to know about you?

I am actually a very private person, so wanting people to “know things about me” is actually very low on my agenda. But with that said, I will humor you with a fun fact: I have a scar on my chin that I received from a pillow fight with my little sister that I received when she was maybe only five years old! Intrigued yet? Of course, you are. Now, I was only about six years old at the time, but the very important detail I have withheld is that she was using a couch pillow, and it had a very sharp zipper on it, and the rest is history. I’m sure my six-year-old memory is not to be trusted, but I pretty much remember blood gushing from this grievous wound like the neck stump of that guy that gets decapitated in Kill Bill.

Write! That’s it. The antithesis of writing is not writing—putting it off, waiting until we feel like we’re good enough, procrastinating. The only way that you will become good enough is by making a regular practice out of it. We often talk about people who are naturally good at things and people who become good at things because they work at it. I will be the first to tell you that I was not born a naturally good writer. That did not come to me well until my late 20s, and I had already written several bad unpublished novels leading up to that point. What I was born with was the desire to be a writer. I actually can remember few things I wanted to be as a young child more than I wanted to be an author. Being a teenage mutant ninja turtle was one of them. But even if being a ninja was an achievable goal for me, I think we can all agree that no amount of practice would ever let me become a mutant turtle. All that was left was for me to become a writer.

Are there any other projects you are working on right now and at liberty to speak about?

There is nothing official yet, but I have a full synopsis my agent really likes, and we’re just polishing up the sample chapters. Have I mentioned I love video games? I am particularly a fan of Life is Strange, which in my opinion is like the greatest YA novel never written, and there is an element of this story that is heavily inspired by my love of the original game.

Picture Us in the Light by Kelly Loy Gilbert—a very deserving Stonewall Book Award nominee. Kelly is also just the most delightful writer you will ever meet in person. I am not biased, you are!