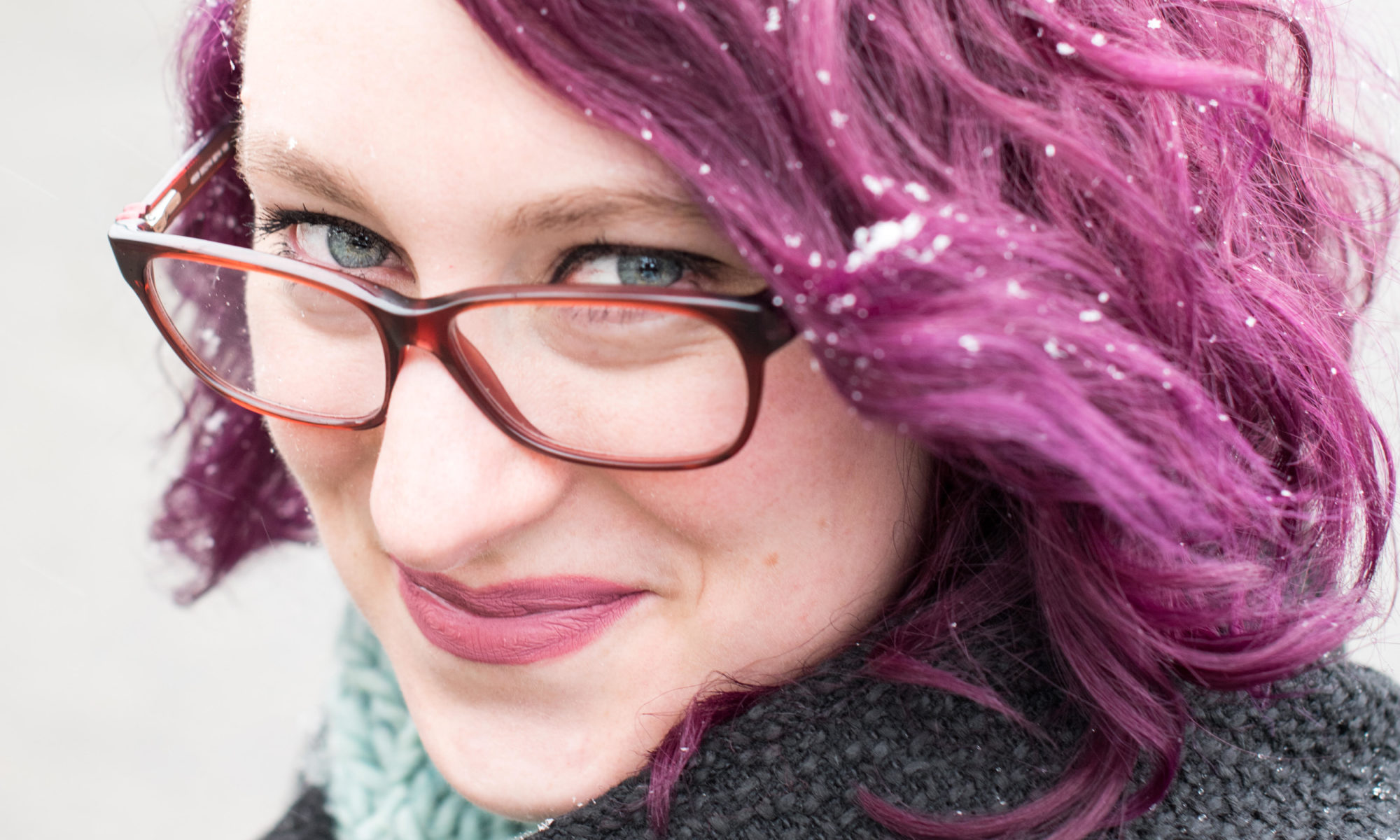 Rosiee Thor (she/they) began her career as a storyteller by demanding to tell her mother bedtime stories instead of the other way around. She spent her childhood reading by flashlight in the closet until she came out as queer. She lives in Oregon with a dog, two cats, and an abundance of plants. She is the author of Young Adult novels Tarnished Are The Stars and Fire Becomes Her and the picture book The Meaning of Pride.

Thanks for having me! I’m Rosiee, a queer author of YA science fiction and fantasy. Since I grew up without stories that reflected my identity or experience, I love writing about queer kids having adventures and saving the day. I’m also an avid gardener and mediocre gamer.

When did you know you were first interested in writing, and what drew you specifically to young adult fiction and speculative fiction?

I’ve always been a bit of a storyteller. When I was little, I would spin outrageous tales for my parents—they’d probably call it lying but… semantics. I wrote my first story down on actual paper when I was in fifth grade, and I kind of just kept going from there. I didn’t really understand that being an author was a real job that I could grow up to have until I came across a novel that was written by a teenager. I remember my mom making a huge deal out of that fact when she brought the book home for me and then I connected the dots. I think I gravitate toward young adult books mostly because those are the books that shaped me as a storyteller, but also because I saw a real lack of stories about people like me when I was growing up. LGBTQIA+ stories were hard to come by when I was a teenager. There were a few—Tamora Pierce’s circle of magic books, for example, really inspired me—but I was such a voracious reader that I ran out of options pretty quickly. As an adult, I still crave those stories, so I wrote for the teen I was and for the teens out there now who may need to see themselves reflected in fiction.

What can you tell us about your latest novel, Fire Becomes Her? Where did the inspiration for this story come from?

The initial inspiration for Fire Becomes Her came from a song: “Burn” from Hamilton. As an aromantic asexual person who avoids relationships like the plague, I’ve never really felt romantic betrayal, which is what the song is about, but as I listened, I was reminded of a different type of betrayal—the betrayal of a government failing to protect its people. I wrote most of Fire Becomes Her during 2020, truly a banner year for political disappointment, and it allowed me to process my emotions about living in a country where my elected officials seem more interested in grand standing than governing. As an author, I write most often from a place of frustration—almost all of my story ideas come from me being annoyed or angry about some system or other. For Tarnished Are The Stars, my first novel, that was the American healthcare system; for Fire Becomes Her, it was wealth inequality and voter disenfranchisement. I realize that’s not a particularly flashy inspiration, but it’s the truth.

As a historical fantasy fiction book set in the 1920s, I’m assuming there was some research involved in Fire Becomes Her. Could you maybe tell us about that?

It actually involved less research than you might think! The world of Fire Becomes Her is a 1920s inspired fantasy analogue called Candesce. It’s a city-state with some similarities to our world, but with one major difference: fire magic. In order to maintain the 1920s vibe, I promised myself that I wouldn’t include anything that wouldn’t have existed in the 1920s, so I did a fair amount of research about certain technologies and architecture. I ended up fudging that rule on a few things to make room for more modern discussions of sexuality and gender identities, but it did make for some interesting google searches!

As an aspec reader, I’m always grateful to see more aspec fiction in the world. Could you talk your personal motivation in writing aromantic/asexual characters and what representation in general means to you?

As an aromantic asexual spectrum person, it’s important to me to create representation that would have resonated with me as a young person. I try to write from a place of authenticity, and I think Ingrid—the main character in Fire Becomes Her—is one of the most honestly written characters I’ve created. Her story came directly from my own as an aromantic person living under compulsory hetero-allo-normativity. The expectations of our community (or even our own interpretations of those expectations) can be wildly damaging, and I experienced that firsthand. I wanted to write a narrative for Ingrid that allowed her to confront that expectation and choose for herself what kind of love she wanted. It was also important to me to include multiple examples of aspec representation, so while Ingrid is aromantic-spec bisexual, there is also an aro/ace side character, a transmasc non-binary asexual, and a central queerplatonic partnership.

How would you describe your writing process? What do you find are some of your favorite (or most frustrating) parts of writing?

I am simultaneously a rigid outliner and a discovery writer—which makes for a very weird process. Basically, I like to go in with a pretty clear plan and I always write an outline before I start drafting, but a lot of it ends up going out the window once I get some words on paper. Character is central for me when I’m working on a new book, which is the main thing I discovery write. If a character ends up a little different than I originally planned, it can impact the rest of the story pretty heavily, and I may have to start over. For example, in the original plan for Fire Becomes Her, Ingrid’s boyfriend was meant to be a bit of a player, but when I started writing, he came out a lot softer and honestly just a total simp for Ingrid. I had to completely change my plan to make room for his character, and I’m so glad I did because his arc ended up being one of my favorites to write!

My best advice is to write something you love. If you want to be an author, you’ll have to work on your book through a lot of drafts, and that’s way more tolerable if you love your story! Don’t try to make your book more palatable to the masses at the expense of the things you love most about it. You are your own first reader, so it’s important for you to like your own work first and foremost.

Other than writing, I love to garden, cook, and play video games. I’m not particularly great at any of them, but I love having hobbies that I can be mediocre at and still enjoy. After a childhood of trying to be perfect, it’s been really nice to let go of that and allow myself to love things just because they’re fun. I’ve been enjoying experimenting with making different kinds of soup, learning to grow herbs indoors for the winter, and blundering my way through playing Breath of the Wild.

I’m working on a bunch of stuff I’m super excited about! I make it a habit not to talk about them in too much detail too early on, mostly because projects can change so much while I’m still learning what they’re about and how I want to write them, but I can say that I’m working on branching out into new genres and age categories this year. I’m excited to be publishing my first picture book in April this year, and I’m working on developing some middle grade and adult projects too! I love to challenge myself to write outside my comfort zone, and this seemed like the perfect opportunity to do so.

I have a lot of favorites, but a few recent standouts are A.M. Strickland’s In The Ravenous Dark, which is a dark fantasy about a pansexual, polyamorous princess; Alechia Dow’s The Kindred, which takes the soulmate trope to space with a demisexual main character; and Mara Fitzgerald’s Beyond the Ruby Veil and Into The Midnight Void fantasy duology about a chaotic lesbian with a knife and her villain origin story.