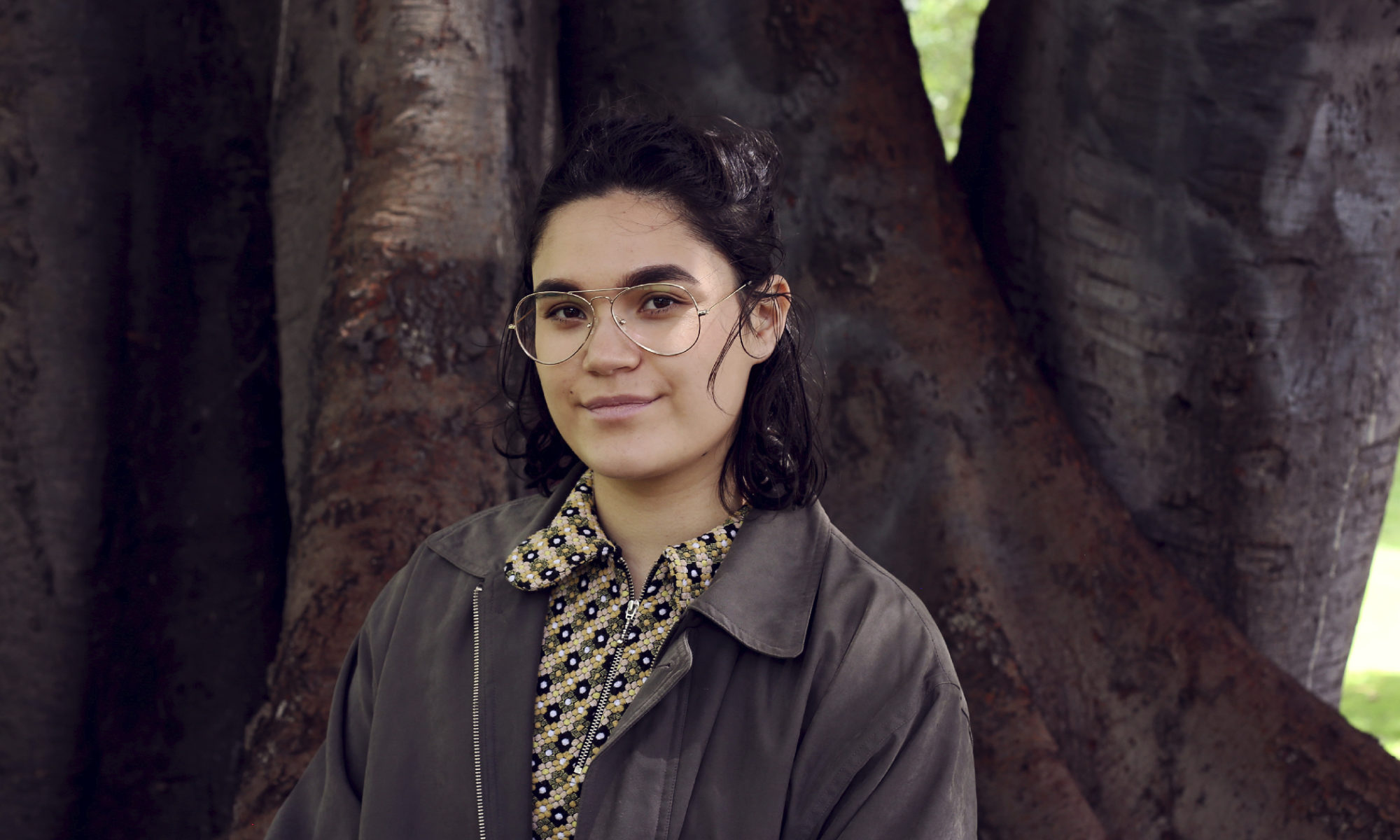 Ariel Slamet Ries is an eggplant fanatic and longtime lover of dogs in snoods from Melbourne, Australia. They studied animation for four years before throwing away the prestige and money to pursue comics. They’re still waiting to see how that will turn out.

I had the opportunity to interview Ariel, which you can read below.

First of all, welcome to GeeksOUT! Could you tell us a little about yourself?

Thanks for having me!

I’m Ariel Slamet Ries, a comic artist and illustrator based on Wurundjeri land in Australia. I’m just an eggplant who likes to tell stories about people in fantastical worlds. I also spend a lot of time thinking about weird animals.

I’ve probably been into comics since I sprung from the womb. My family had a small collection of comics—Calvin and Hobbes, some old Matt Groening—but I was rarely allowed to buy them for myself. My parents were both journalists at the time, so I think they considered comics junk food reading.

Because of that, part of the appeal of comics to me was the forbidden fruit aspect. In my search for a taste of that elusive comics flesh I stumbled across webcomics. They were free and accessible, so I read as many as I could get my hands on.

It was inevitable then that I got into making comics. I was already passionate about drawing from a young age, and took to creative writing in school. Combining the two somehow always seemed like the natural progression. I had dabbled with making comics in high school, but nothing stuck until I started Witchy during a break after my first year of university.

How would you describe your comic, Witchy? What was the inspiration for this project and how did it come to be?

Witchy is set in the witch kingdom Hyalin, wherein everyone’s magical ability is determined by the length of their hair. If your hair is too long, you’re deemed a danger to the state and executed by witch burning.

The story follows Nyneve, who is haunted by the burning of her father and the threat the Witch Guard poses to her own life. When conscription rolls around, Nyneve chooses to defy the institution complicit in her father’s death and commits a selfish act of heresy.

Hair is a central part of the story because I was drawn to its ubiquity—most people have hair and so can easily imagine themselves in the story world. In the Witchy universe, the capacity to grow long hair is also something you’re born with—I wanted to use that to interrogate how power and wealth works in the real world; what kinds of strength we value, and who gets to wield that power based on the traits they were born with.

How did it come to be? Well, it had been something I’d been planning since high school, and then I started it in university, and then instead of having a life in university I spent all my free time making a webcomic. (don’t worry, I’m joking at least 50% here.)

Since your story is clearly set in a fantastic world, what draws you in to speculative fiction, and witches in particular? Did any real-world or magic based systems inspire you while creating your own universe?

First and foremost, I think magic is fun! Also, writing speculative fiction is all I can do—it’s just how my brain is wired. I find it more difficult to set something in the real world because there are so many elements that you have to get “right.” In a fantastical setting I’m able to examine reality and humanity through a different approach, and maybe that’ll lead to an interesting insight?

I actually don’t think I’m interested in witches explicitly—I wanted there to be magical people in this world, and I thought it would be fun to play with the more traditionally feminine image we have of witches.

The most significant influence to the magic system are the real world animistic religions that are practised traditionally all throughout Asia–the idea of a spirit, of godliness, being inherent in all things. They’re belief systems that are rooted in practicality–pay close attention and love to the rhythms of the natural world, you will be rewarded with food, medicine, and security. I’m just adding a magical twist to that.

Since Geeks OUT is a queer centered website, could you tell us a bit about the LGBTQ+ characters and/or themes featured in your books?

Pretty much all the characters in Witchy fall into one or more categories of the LGBTQ+ umbrella. I’m not particularly interested in writing about cis-straight characters; those aren’t the people I’m spending most of my time with, and there’s enough people out there doing that already.

That’s kind of the point of Witchy—I don’t have any grand illusions about the power of my work, I just want to create stories where us queers get to do the things that the straights get to do. Telling an action/adventure story like all the shonen manga i loved reading as a teen, but that centred on a lesbian protagonist, was a major part of my initial drive to create Witchy.

As an artist/ writer, who or what would you say are some of your greatest creative influences and sources of inspiration?

Hmm, Ursula K. Le Guin and Satoshi Kon come to mind as artists whose works I admire deeply, but who didn’t sacrifice kindness and patience in their personal philosophies. They stick in my mind because of the way they resisted the grind mindset that is so prevalent in creative industries–when I think of how evocative and powerful their works are, I try to remember this and bring it into my own practice.

I’m also hugely inspired by my friends! I’ve somehow stumbled across a supportive international community of comic and art-making friends that are frankly incredibly smart and talented, without whom I think I’d feel very adrift in the world.

What are some of your favorite elements of craft when it comes to comics?

I pay a lot of attention to page layout and composition. Coupled with good writing (which, in comics, is paradoxically as much about image choice and acting as the dialogue, in my opinion) I think you can get away with everything else looking pretty rough. There’s a reason ONE—the creator of One Punch Man and Mob Psycho 100— is so popular; despite the naivete of his draftsmanship there’s a real understanding of these fundamentals.

Creating a page with a good flow for the reader can take a bit of work, but when I’m reading comics there’s nothing more off-putting than a page that’s hard to parse.

“Have you learnt any cool facts about eels lately?”

Why yes I have! Thank you for asking. We don’t really know how freshwater eels reproduce in the wild. We’ve been able to make them reproduce in captivity but we haven’t observed them mating or spawning or whatever, out there in the ocean. I just think that’s neat.

Are there any other projects you are working on or thinking about that you are able to discuss?

Absolutely! I’m currently taking a hiatus from Witchy (I’ll be back! I promise!)  to work full time on my graphic novel Strange Bedfellows, a queer sci fi romance about Oberon, a boy who’s recovering from a very public “breakdown,” then develops the ability to conjure his dreams in real life—including a facsimile of his high school crush, Kon.

It’s a story that’s been floating around in my head for a long time, so I’m really excited to finally be working  on it. It has a lot of my favourite things in it, so I’m putting everything I’ve got into every stage of the process. We’re about wrapped with the writing now, and I’m so stoked to start drawing!

Take care of your mental and physical health above all else. Going through a bad burnout is so much more of a sacrifice than getting enough sleep every night! Don’t buy into grind culture and work at your own pace—you’ve got time.

Here’s a few of my recent favourites:

Our Dreams at Dusk — a gorgeously drawn coming of age manga about a troubled gay student who discovers an eccentric queer community group in his small town.

Beetle and the Hollowbones — this ones for readers looking for LGBTQ+ stories they can share with their kids: A super fun romp through a monstrous world as a goblin, a skeleton and a ghost try to save their local mall.

Mamo — A young witch returns to her small town in the wake of her grandmother’s death and meets a girl whose family is besieged by a poltergeist in the attic. Beautiful art, captivating story.