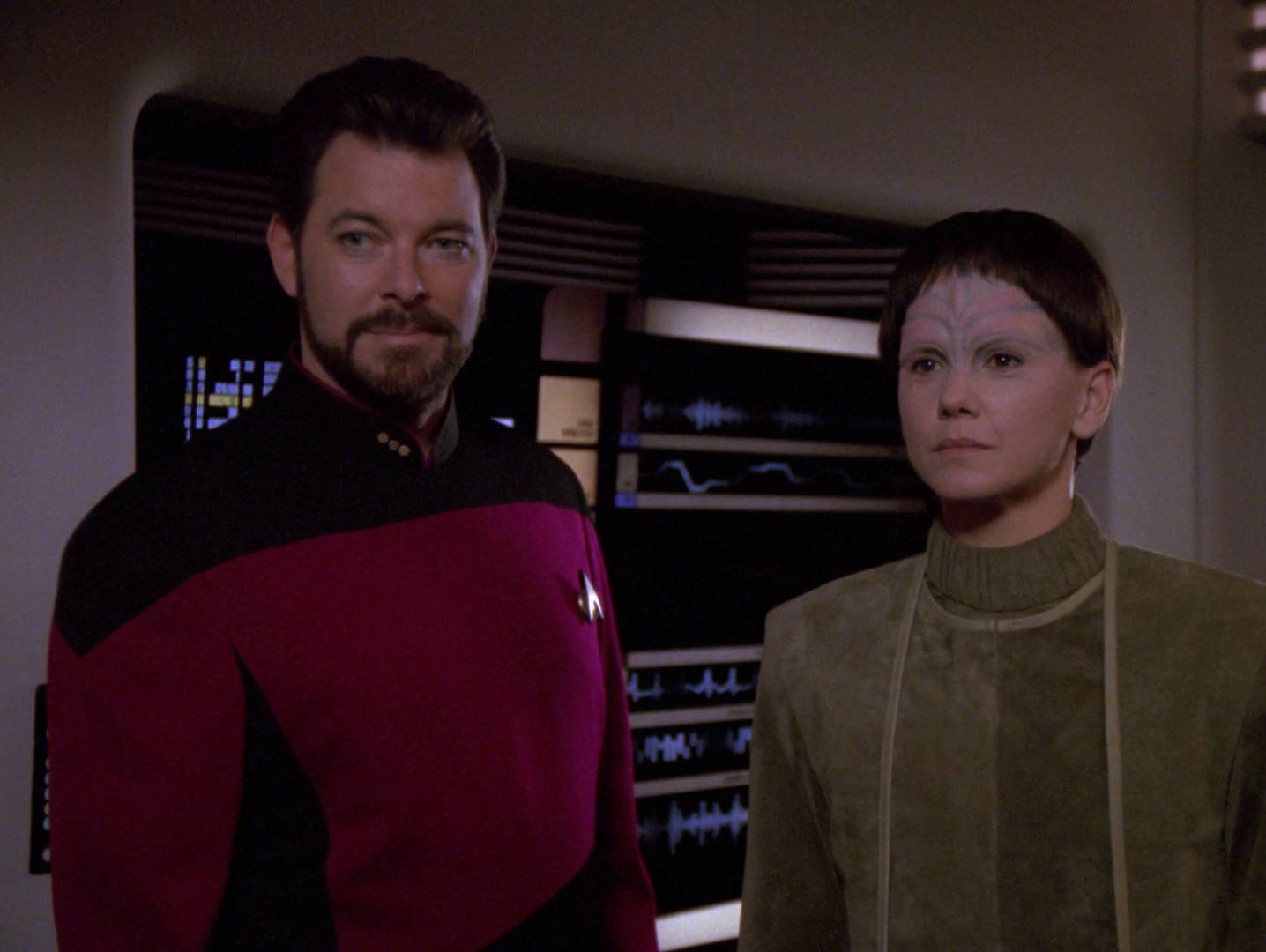 From the very beginning, Star Trek has garnered a reputation for being a trailblazer on minority representation. Each of its series has featured a diverse cast and strong female characters that stood out from it’s contemporaries. Whoopi Goldberg is perhaps one of the more prominent Star Trek fans to have been inspired by Nichelle Nichols role as Lieutenant Uhura in The Original Series. The same role has inspired a few actual astronauts as well. It is for this reason that the lack of LGBT representation across nearly two decades of Star Trek television (1987-2005) was such a disappointment.

The one honest attempt to take on LGBT issues came in the form of the 1992 Next Generation episode “The Outcast.” While it has some truly great moments that clearly depict the writer’s intentions, it ultimately falls short of having any true representation. I’m not the first person to do a present day analysis of this episode, and I doubt I will be the last. The fact that it is the one episode out of roughly 700 (and 12 movies) to honestly tackle LGBT issues head on, it stands out. With a new series set to launch in 2017, it’s worth taking a closer look at one of the franchise’s more unfortunate shortcomings.

“The Outcast” opens with the USS Enterprise assisting the J’naii (an androgynous race) with locating one of their missing shuttle craft. In their search they come across what appears to be a pocket of null space–a theoretical concept which had never been encountered before this discovery. Null space is described in Memory Alpha as “a pocket of space filled with the bright light of condensed turbulent magnetic and gravitational fields, absorbing all electromagnetic energy from anything that enters the phenomenon. The fields also bend all outside energy around the pocket, making it essentially invisible.”

After the crew is briefed on the abnormality they are dealing with, Commander Riker teams up with the J’naii pilot Soren in order to attempt a rescue mission. In doing so, the two begin to talk about their respective culture’s views on gender. Here we learn the J’naii once had two genders like humans, but they evolved to a higher form and now share a single gender. When Soren asks Riker about what attracts males to females, he gives a coy response filled with his winning Riker charm, but fails to mention the existence of homosexuality among humans. This is repeated later on when Soren questions Dr. Crusher about the female perspective. On both occasions the conversations lent themselves perfectly to both Riker and Crusher including the alternatives to heterosexual relationships in their answers to Soren. It is as though same sex attraction is something neither character has ever heard of.

I stress this point because I believe it is the most telling flaw in the entire episode. Even in a story that uses an allegory to represent modern day LGBT issues, there is no acknowledgement of queer humans ever existing. Even in our own episode we are invisible. Null space feels like an an unfortunate and unintentionally fitting metaphor.

All of this undercuts the episode’s stronger moments. When Soren “comes out” to Riker as being different and professes her attraction to him as a male, it is a powerful scene. She touches on the bullying she’s seen her peers go through and the constant fear of being discovered. She minces no words describing the evil and abusive practice of forced “curing” those who are outed are forced to go through. The scene can easily resonate with anyone who’s ever dealt with any of those things. In Soren’s particular case, she identifies as female (hence the use of the she/her pronouns). This is considered a perversion in J’naii society.

Soren’s character is nothing if not brave, and not just for “coming out” as female. “Commander, tell me about your sexual organs” might be the best pickup line ever used in the history of Star Trek. It certainly worked for Soren, as it wasn’t long before she and Riker were kissing. This too has been a point of criticism (the kiss, not the pickup line). Jonathan Frakes (the actor who plays Riker) said himself that he thought the scene (and episode) would have been more powerful if Soren were played by a man. If that had been the case, it could have born parallels to the Original Series episode “Plato’s Stepchildren,” which featured the first interracial kiss ever aired on television. Instead, like numerous other parts of the episode, it fell short.

The episode ends with Picard asking Riker if his business with the J’naii is done before moving on to their next mission. Riker confirms that it is, and Picard gives the command to go to warp speed. The one criticism I have here is not that it was an unhappy ending. It rightly portrayed the “curing” of Soren’s so-called perversions in a negative light. What is unfortunate is that the “cure” worked, and it set in quickly. It a difficult thing to stomach when science has shown us repeatedly that so-called conversion therapy does not work. I don’t know how sound or well-researched the science was on this in the early 90’s, so I would give them a pass here. They at least did the part of portraying it as abusive and unjust.

All in all, “The Outcast” is a mixed bag. There are reviews that have praised it, and others that have torn it apart. I don’t think it would be this heavily scrutinized if it weren’t the only real offering of queer issues in the franchise’s long history. The criticism on this front is valid because Star Trek had established itself as a progressive, forward thinking series right from the very beginning. We know it could have done better because it had done better. With a new series coming in 2017, fifty years after the first Star Trek episode aired, should we have hope that the show will once again embrace its progressive roots? Only time will tell.

Further Reading
Homosexuality in Star Trek – a really in depth look at homosexuality in the franchise on the Star Trek fan site Ex Astris Scientia.
Gay “Trek” – a nice detailed article written before the debut of Enterprise for Salon.
Scrapbook Enterprise – my own super geeky documentation on my journey through the Universe of Star Trek.