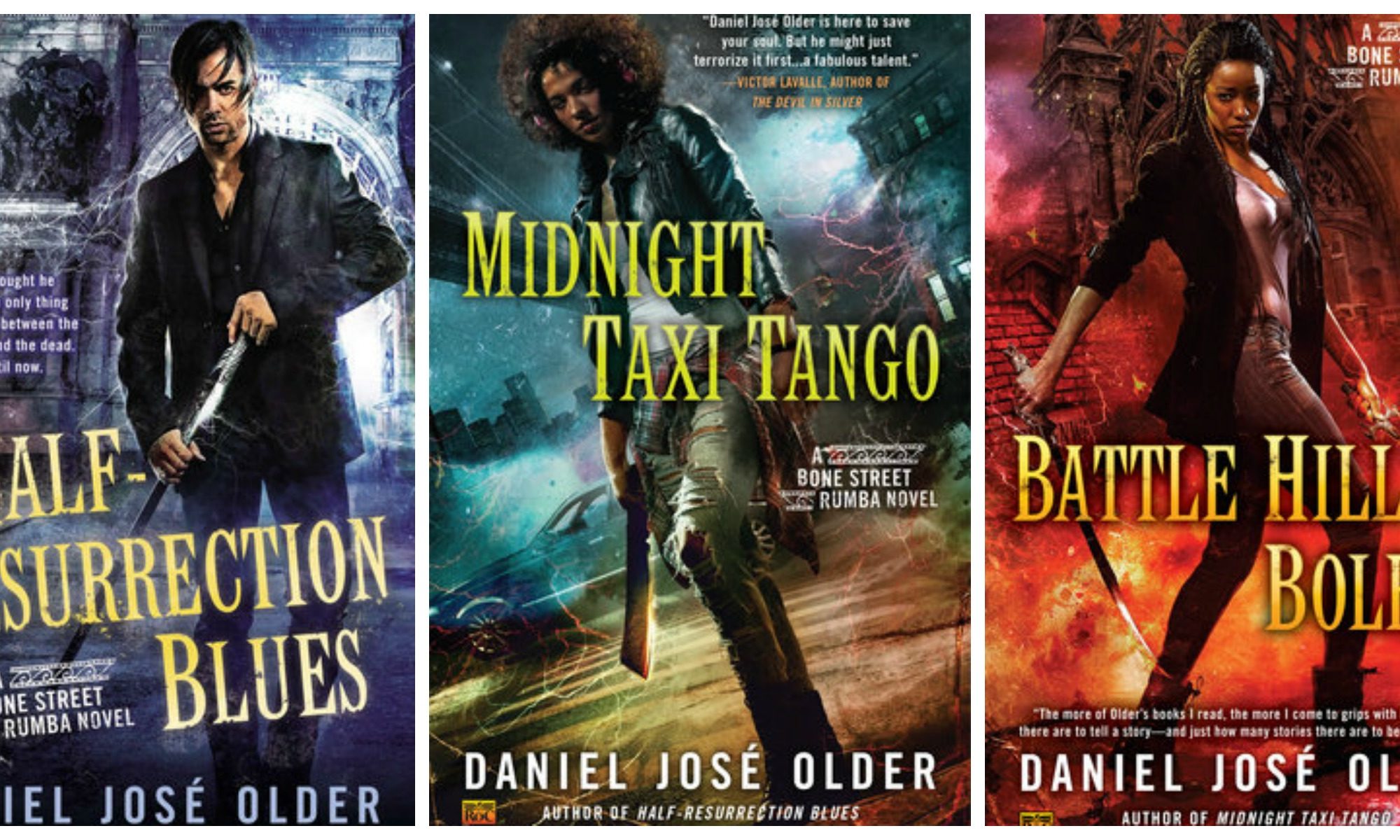 “I first discovered Daniel José Older when he appeared on the excellent When Toxic Masculinity is a Villain panel at Readercon in 2015. I was inspired enough to immediately to pick up my own copy of Half-Resurrection Blues and started reading it on my way home. One of the most satisfying elements of the series is its consistent inclusion and thoughtful execution of some truly badass queer characters. With the final installment released in January–and news that the series has been optioned by Anika Noni Rose–it seemed like the right time to take a closer look at his Bone Street Rumba series and highlight some of the excellent queerness within.

The narrative of all three novels and one shorty story collection features a rotating cast of characters. Some of them are living, some of them are dead, and some of them are in-between. Almost all of them are people of color, and numerous characters fall all over the LGBT spectrum. The setting is Brooklyn, but not the part of Brooklyn most living folk can see. The sprawling narrative initially centers on the half-dead protagonist Carlos Delacruz and his missions for the Council of the Dead, then the second book changes things up by adding the points of view for both Kia Summers and Reza Villalobos. Throughout all of it, Older has his finger on the pulse of each of his characters. He knows what makes each of them tick, and translates their uniqueness and vibrancy beautifully on the page. And it’s his talent for doing this that makes the series so compelling.

Half-Resurrection Blues is the first book of the series chronologically, though it was written after most of the stories in Salsa Nocturna. The story moves at a lightning-quick pace. The only point-of-view character is the half-dead Carlos Delacruz, who has no memory of his life before his death. The book sets up a nice vibe reminiscent of classic X-Files; with with our protagonists working as investigators for the nefarious and untrustworthy Council of the Dead. The most prominent queer character is Baba Eddie Machado, the owner of Baba Eddie’s Botanica who is described as a “consummate santero extraordinaire.” As one of the living characters in the book, he is able to see and interact with the dead. He is also an expert on spiritual matters and plays a pivotal role in keeping Carlos half-alive. His sexuality is indicated by the presence of his husband, Russell, and is but one aspect of his radiant and powerful presence throughout the series. When you’re dealing with an ancient, half-dead sorcerer who literally wants to open the gates of hell, Baba Eddie is a good ally to have on your side.

Midnight Taxi Tango is my favorite of the series. Call it Bone Street’s Empire Strikes Back. Carlos is still a protagonist, but we also get the addition of Kia Summers (who appears on the cover) and Reza Villalobos as POV characters. While Kia herself is not initially presented as a queer character, her missing (and initially presumed dead) cousin Gio is. As Gio’s story is told, at first through Kia’s memories and then his own words, he becomes an integral part of the story. Kia remembers her older cousin as an passionate, anime-loving ballet dancer. After witnessing his high school crush get abducted by demons with pink cockroaches for skin, he disappeared. Seven years later, Gio returns with disturbing news: the roach demons are back and they want him and Kia dead.

Then there’s Reza. Reza works as a muscle protecting sex workers for the illegal side business of a legitimate of a car service in Brooklyn. When the book opens, she is dealing with fresh grief over the mysterious disappearance of her partner Angie. After Angie’s death is confirmed and linked to the same pink roach demons, Reza’s story quickly becomes intertwined with that of Kia, Gio, and Carlos. One factor distinguishing her from her co-protagonists, Reza’s story is one of revenge. She’s been through some shit, and has survived by following a simple philosophy: never be out-gunned. I absolutely loved every Reza chapter, and would strongly advocate for her to get her own spin-off series.

Originally published before Half-Resurrection Blues, Salsa Nocturna has since been reprinted with two new stories. All of these are set between books two and three of the trilogy. The majority of the stories center around Carlos and Gordo, but there are plenty of exceptions (including Reza’s “Date Night”). In the book’s preface, Older recalls a phone call with his editor Kay Holt where she called the book out for being a damn sausage party, after which he got his shit together. This thankfully gave us Krys, a mohawk-sporting phantom who works for the Council of the Dead and caries a rocket-launcher named Greta. She is the central character in the queer themed stories “Magdalena” and “Victory Music,” and goes on to become a POV character in Battle Hill Bolero. While the stories in this collection don’t seem to fit together with the larger narrative at first, they are enjoyable on their own and gradually begin setting the stage for the looming showdown in the final novel.

Battle Hill Bolero features a sprawling narrative as things finally come to a head between the corrupt Council of the Dead and the Resistance. Carlos continues to be the main POV character, but is joined this time by Sasha Brass (a mainstay from book one), Caitlin Fern (introduced in book two, and our first villain perspective), and Krys. Like all of the other books, the action starts right on page one and never slows down. As tensions heat up, Krys is introduced to Redd, a former slave whose soul was released from captivity in the Salsa Nocturna story “Red Feather and Bone.” Through context and an awkward conversation, it is revealed that Redd was not born a man. This was done tastefully and, through the failings of one character, provides a great lesson on what questions not to ask and the overall complexities of gender. As the war rages on, Krys and Redd grow closer, and it’s beautiful to see two ghosts who died young finding one another after death.

Even though the book series has concluded, it still has a lot of promise for an adaptation. We need more queer characters in our shows and movies; specifically characters that aren’t desexualized and don’t devolve into tokenism. There also needs to be better representation of people of color within queer themes and stories. Bone Street Rumba is present and unapologetic on both of these fronts. The noir, urban fantasy world lends itself to some terrifying and beautiful imagery. Some smart casting could give these already vibrant characters a whole new life (no pun intended). The genre of fantasy is more popular now than ever, and it is past time to bring some much needed diversityinto the fray.”