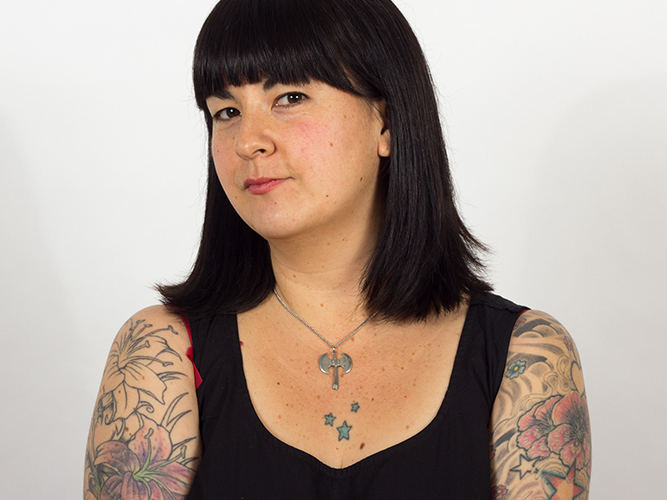 Mariko Tamaki is an artist and writer of mixed Japanese Canadian and Jewish Canadian descent, known for her graphic novels Skim and This One Summer (co-created with her cousin Jillian Tamaki). Recurring themes in her work include becoming, identity, and queerness. Since 2016, she’s been writing for both DC and Marvel  on comics like She-Hulk and Supergirl: Being Super, and her English language translation of the queer coming-of-age story Luisa: Now and Then (by French writer and illustrator Carole Maurel) was released today by Humanoids. This August, she’ll be joining Geeks OUT as a special guest at Flame Con, so we wanted to get to know her a bit better before then!

For several years, you’ve collaborated with your cousin, artist Jillian Tamaki, on books like Skim and This One Summer. What is the creative process like for you working with family? Are there any challenges that are unique to working with a familial relation?

I imagine pretty much all collaborations have unique elements. There is a part of our connection that is familial, in that we have very similar senses of humor, I think, and some very Tamaki sensibilities.  Mostly I, certainly, have always trusted Jillian to do her thing (which she does exceptionally well) and mostly our publisher has let us do things the way we need to do them, so that’s awesome.

Throughout much of your career, queerness has been a prominent (or at least recurring) theme of your work. As a queer woman yourself, how much of your own experiences do you incorporate into your fiction writing?

I’m not sure sometimes if I default to a queer experience because I am queer or if it is because I specifically want to see more queer content out there.  I think it’s always a little bit of both.  I try not to overthink it.  I try to write the story I want to write and see how that pans out.  Definitely if I am writing something that feels completely straight, I’ll sew some queerness in there, because queerness is always there. It’s like when you’re writing a cityscape, you need to write in the characters that would be there.  To me, not doing that is more of a choice.

My first introduction to your work was Skim, the graphic novel about a young girl named Kimberly Keiko Cameron, set against themes of first love, mental illness, and suicide. What was the creative inspiration behind this work?

I just pictured this character one day who had a broken arm because she had tripped over a candleholder that was part of her Wiccan altar.  I was sitting on the bus and I just had that image so clearly I was like, “I bet that’s a book.” Once I started writing it everything sort of just fell into place. I’d always wanted to use my experience in a private all girls school for something, so this seemed like that place to do it.

There’s a recurring theme in your stories of characters coming-of-age stories. Why do you gravitated toward this particular narrative?

I don’t necessarily mean to write “coming-of-age” stories. I am interested in the mechanics, the experiences, that go into the things we take for granted, like identity, like being a girl or boy or neither, like being smart or funny.  All that stuff.  We are all always becoming the things we are.  That doesn’t stop when you turn 20, but it’s incredibly potent when you’re a teenager.  And potency makes for good stories.  So there you are.

What is the most significant way your more personal work differs from your work on comics like She-Hulk?

Generally, until I wrote She-Hulk, very few of my characters were green or grey. Also, writing for superhero comics, you’re writing into a world, you’’re writing against the backdrop of a genre, which is sort of always there no matter what you’re writing.  So it affects what you write in a myriad of little ways.  It’s a challenge, but it’s a good challenge.  I want my mainstream comics work to feel like it’s coming from me, but I also want it to be a part of the larger whole of mainstream comics.

Do you have any favorite queer authors or books you can recommend?

Right now I’m recommending Emil Ferris’s My Favorite Thing is Monsters.  I know Maurice Vellekoop is working on a graphic memoir to that will be published by Pantheon Books.  I have seen bits of it and it is amazing.  I loved Molly Ostertag’s Witch Boy and I’m thoroughly enjoying Moonstuck series by Grace Ellis and Shae Beagle.  I could go on.

Do you have any new ideas or projects for us to look forward to?

I have a book coming out in 2019 with Rosemary Valero-O’Connell called Laura Dean Keeps Breaking Up with Me.  I’m working with Juan Cabal on X-23 for Marvel.  I have a Harley Quinn graphic novel with DC Ink with Steve Pugh called Harley Quinn: Breaking Glass.  My third book with Abrams for our Lumberjanes series with Brooklyn Allen is called The Good Egg and I am so excited for people to read it.  And I’m currently writing a YA murder mystery, but I’m not sure what the title will be yet, so look out for that.