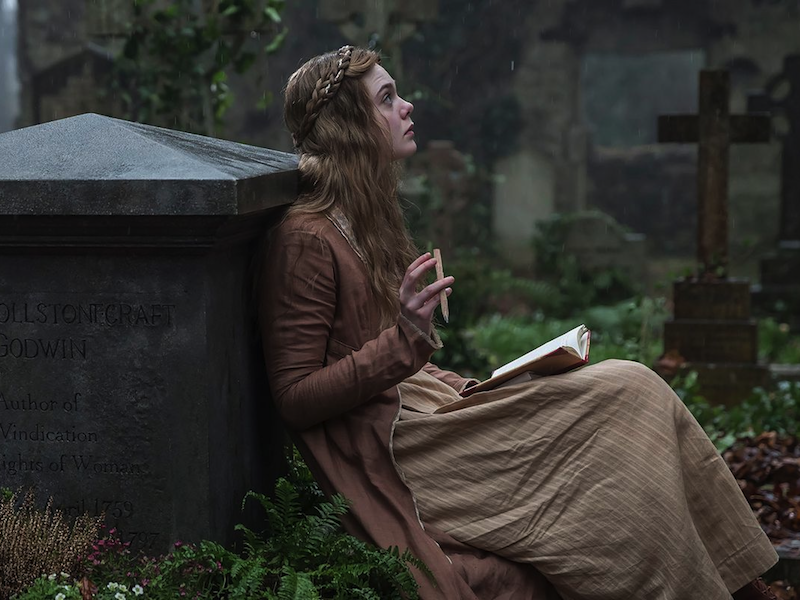 Mary Shelley, my favorite feature from this year’s Tribeca Film Festival (and now available to stream), casts an electrifying Elle Fanning as the woman who invented science fiction with the classic novel Frankenstein, or the Modern Prometheus. Mary’s been portrayed on screen before, by the likes of Elsa Lanchester (who was both creator and creation in Bride of Frankenstein) and Natasha Richardson (in Ken Russell’s baroque and bizarre Gothic), but never before with any sense of realism, and certainly not in so feminist a manner as this movie.

Which isn’t to say that Mary Shelley—which, ahem, was directed by Saudi Arabia’s first female director, Haifaa Al-Mansour—is without style. It’s a gorgeously shot, meticulously designed work that dramatizes its real world characters with immediacy and excitement. Still reeling from the death of her mother, and stymied by the tyrannical presence of her stepmother, Mary is a misfit who buries her nose in horrific, “unsavory” books and has no one to rely on apart from her sister Claire (Bel Powley). That is, until she meets the beguiling poet Percy Shelley (Douglas Booth), her father’s literary apprentice, and the two embark on a forbidden romance. Eventually the lovers run away together, taking along Claire, but happiness proves elusive for the trio. The mercurial, philandering Percy causes Mary no small amount of pain, and Claire’s affair with the enigmatic Lord Byron (scene-stealing Tom Sturridge) causes her equal misery. Through it all, Mary manages to persevere and put pen to paper for the masterpiece that is Frankenstein—even if she has to convince sexist publishers to take a chance on such a ghastly work for a female author. The inspiration for this monstrous tale is rendered in gripping cinematic fashion, by a “Phantasmagoria” stage show the characters witness and an eerie nightmare Mary has while staying at Byron’s Swiss villa.

Mary Shelley makes many such flourishes, and takes liberties with the truth—but it works, and the effect is beautiful. The poetic dialogue sounds like it belongs in an exceptionally witty play; it’s delivered by a great cast led by the excellent Fanning. Booth is appropriately beautiful and narcissistic as Percy, while Powley brings levels to the tortured Claire. Sturridge, as Byron, makes quite the impression on characters and audience when he greets Percy with a kiss on the lips; sadly, his bisexuality is left largely unexplored, save for a vague allusion later on. It’s forgivable considering how much material the writers (Emma Jensen and Al-Mansour) had to whittle down. There’s also a gorgeous score by actress/composer Amelia Warner.

Mary Shelley is a fast-moving, fanciful, yet resonant treatment of the life and talent of the famous author. It reveals a uniquely female perspective on love, loss, and sisterhood, and sheds a very modern light on the pitfalls of navigating a sexist world. Go see it.