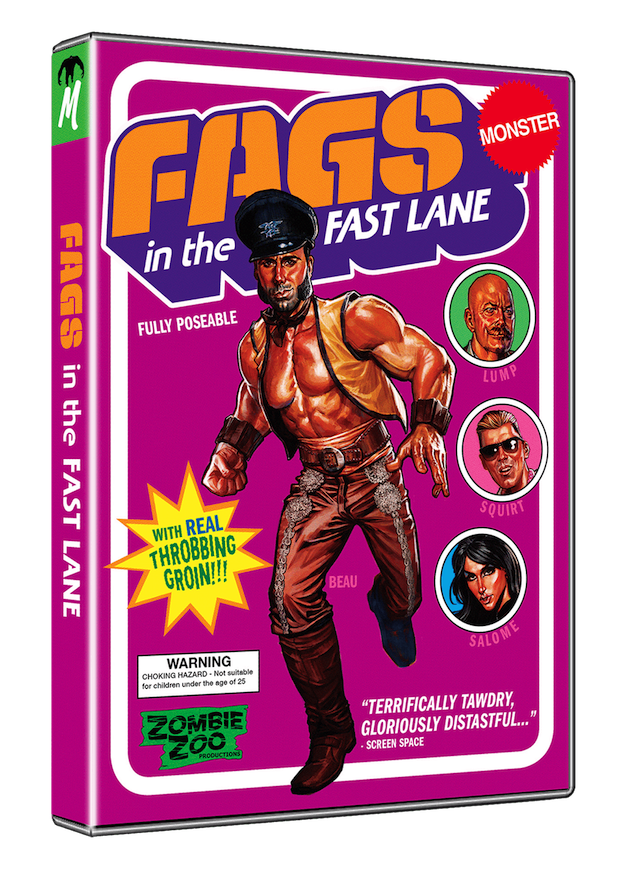 With a title like Fags in the Fast Lane, you expect a certain type of movie: politically incorrect. Exploitation throwback. Very, very silly. Australian production company Zombie Zoo Productions delivers on all of these counts, though my take is that co-writer/director Josh “Sinbad” Collins’s film is ultimately so good-natured, it’s unlikely to offend anyone. I once read a review that described the “candy-colored, amiably slapdash” Austin Powers: The Spy Who Shagged Me, and that review popped into my head while watching Fags in the Fast Lane, with its fanciful costumes, arch performances, and hilarious miniatures, which make no attempt at realism whatsoever. (A dinosaur scene is about as convincing as the time I filmed my Jurassic World toys for YouTube.)

What semblance there is of a plot involves dynamic duo Sir Beauregard (Chris Asimos) and Reginald Lumpton III (Matt Jones) and their attempt to track down the burlesque gang (played by performance troupe the GoGo Goddesses) who stole precious jewels from Beau’s mom Kitten (these names!). Kitten is played, naturally, by Kitten Navidad, who earned her vintage sexploitation bonafides as the star of Russ Myers’ infamous Faster Pussycat! Kill! Kill! Here, she’s a Madame running a GILF bordello. When she’s not having hilariously energetic sex with the villainous Chief (Pugsley Buzzard), she’s wailing about her stolen jewels. Beau, who always calls her “mama” because of course he does, enlists the Chief’s twink son Squirt (Oliver Bell) and Salome (Sacha Cuhar) to take on the gang’s fearsome leader, Wanda the Giantess (Aimee Nichols). Wanda’s voice is intensely, hilariously deep, and she is in possession of something even more precious than jewels: the powerful “Golden Cock”!

Really, this is all an excuse for a series of loosely connected skits, action sequences, and musical numbers. Highlights include a cheeky ballad sung by Hijra (Arish A. Khan) when he loses his “precious Golden Cock” and a stop motion animated sequence in which Squirt is “threatened” by all manner of phallic swamp creatures. As a cis gay man, I wasn’t personally offended by any of this nonsense, although a baseball bat is shoved pretty severely up a character’s butt (the “special effects” are too low grade for it to be all that gross) and Salome’s gender bending character leads to some offensive terminology: a “she-male worshipping cult” that is one of the approximately thirty-five brief subplots. Salome herself is sexy and ass-kicking, in any case.

Interestingly, director Collins is straight. According to the entertaining press notes, he and his wife Barbara “have created a variety of retro parties, theme bars, and happenings around the globe.” With Fags in the Fast Lane, they give us queer characters to root for and a memorable slice of ridiculous fun.

Fags in the Fast Lane is available on DVD