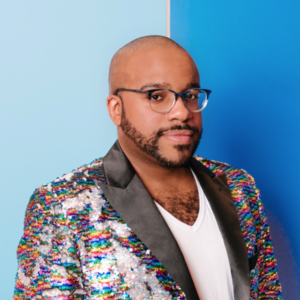 We here at Geeks OUT want you, the reader, to know more about who we are. To help with that, we’ve started interviewing members of our board so you know what makes us tick. Here’s our fourth interview!

Who are you and what do you do for Geeks OUT?

Hi! I’m Kyle-Steven Porter, and I’m presently a Board Member for Geeks OUT, serving as co-chair for the Conventions Committee as well as acting Diversity Lounge Manager at the US-based PAX conventions.

How did you first get involved?

While Geeks OUT events had always been on my social radar, my first actual event was Flame Con 2, back in the summer of 2016. I then volunteered at NY Comic Con, and shortly after that, wound up on the Board.

What makes you geek out?

My earliest introductions to the wonderful world of geekdom would have to be Nintendo, comics and literature. The Super Mario Bros/Duck Hunt combo was the first video game I ever played and it made a fantastic impression. We had a few other systems as well as the years went on, but the Nintendo ones were always where I felt the most at home and, more importantly, had the most fun. (With the exception of the Virtual Boy and Wii U, I’ve owned every other Nintendo system to date.) Most Mario iterations (Kart, Party) are great at breaking the ice and losing to me, and the background of my phone is Ike from Fire Emblem Path of Radiance. I’ve already got over 100 hours logged in Fire Emblem 3 Houses and it’s been out for just under 2 weeks.Other fun media franchises that had a strong influence on me growing up (and still yield quite a bit of geeking) are Spider-Man, Pokémon, The Simpsons, Power Rangers (Mighty Morphin through Space were watched RELIGIOUSLY), Animorphs, Beast Wars and Invader Zim. I also currently possess a freakish wealth of knowledge of RuPaul’s Drag Race.

What are your favorite geeky past times?

I love drawing and making fan art when I can, but that can be a little tough to juggle with real world stuff. Most often the easiest way for me to unwind is through video games – my commute to work is an hour each way, which makes for getting in some solid time on games on my 3DS or Switch. I also LOVE having a game night with friends – board and card games work, and the Jackbox Party Pack is good at getting people involved who might not otherwise play.

What book/tv show/comic/etc. are you enjoying now?

Sorry to sound like a broken record, but Fire Emblem 3 Houses! With the amount of dialogue in it, it might as well be a book, and the cutscenes and events often have you feeling like you’re involved in an epic miniseries if not lengthy movie. It’s not without some faults (very minor spoiler alert: HOW is Claude not bi with the amount of flirting he does with you?!), but it’s still easily the most fun I’ve had with a game this year. I also think Into The Spiderverse might very well be the best movie of the last 10 years, if not more.

Who do you ship?

If you’re ever at PAX East, West, South or Unplugged, I’ll be in the Diversity Lounge with Geeks OUT – come say hi! You can also catch me as one of the cohosts of The Shade Of It All: A Rucast Podrace for RuPaul’s Drag Race, available on iTunes/Apple Music, Google Play, Spotify and more! We go off on geeky and pop culture tangents all the time (with a majority of them being Simpsons references), so it’s not just a straight recap – it’s more a gab session with friends. 🙂