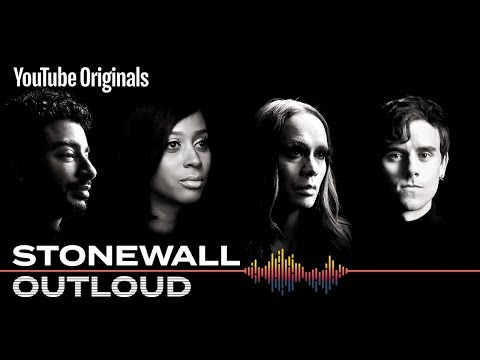 As Bailey told the crowd at the screening, there are very few photographs from the Stonewall riots, so he and Barbato had to get creative.  Their brilliant conceit was to bring audio recordings of the participants to life by having various LGBT celebrities “play” the storytellers: i.e. lip sync.  It seemed a little odd at first, seeing the likes of Lance Bass, Adam Rippon, and Isis King “speaking” for the participants, but I quickly got used to it.  Considering lip syncing’s long association with drag, the technique is actually all too appropriate; in fact, Drag Race’s Jinkx Monsoon “portrays” the legendary Sylvia Rivera.  The film also includes conversations between the actors and the still living “voices”—like Fredd E. “Tree” Sequoia, who still bartends at Stonewall today—and reflections from both generations on the significance of these events in shaping our community’s ongoing history.    There are also cinematic close-ups of smashing bottles, flashing lights, and other images evoking the riots and the context surrounding them, as well as incendiary footage of Rivera lashing out at a hostile crowd at Pride 1973.  Watching this documentary in the spot where it all happened was a truly moving experience.

Afterwards, legendary journalist Michael Musto conducted a Q&A with Sequoia and Bailey before opening up the floor to audience questions.  One self-identified “zennial” (cross between a millennial and generation Z) professed that they talk about Stonewall “all the time” with their circle of friends and that it’s quite meaningful, “especially for the trans community”—this comment brought a chorus of snaps from their friends in the crowd.  With Stonewall Outloud, those young people and generations to come have an invaluable new testament.