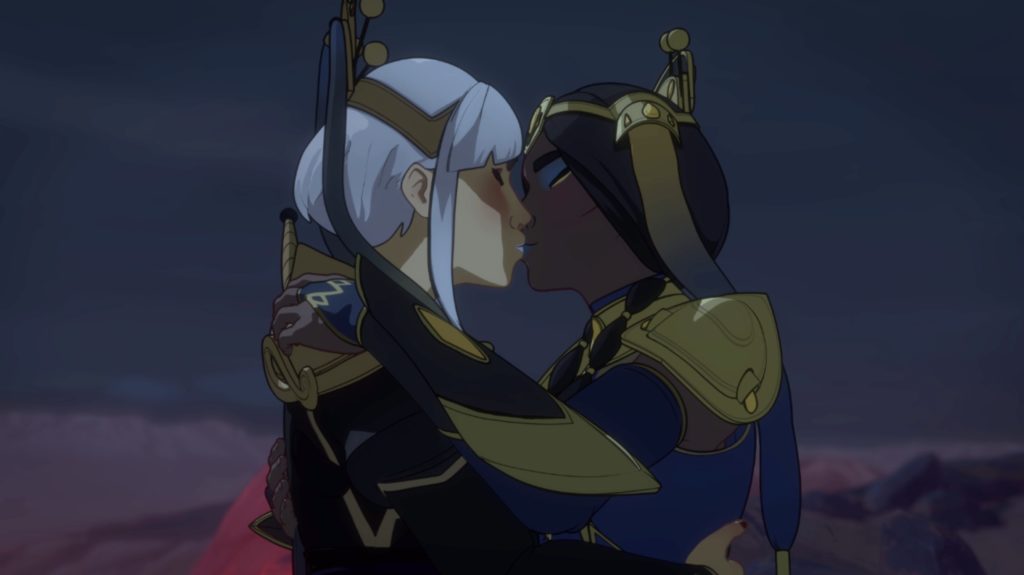 The Dragon Prince recently dropped a 3rd season on Netflix, and continues to break ground in its diversity of representation, which is as vibrant, unique, and exciting as its fantastical setting. But it also teaches some had lessons which other children’s media shies away from.

The first season gave us a mixed-race royal family in which a black man is the king. In pseudo-medieval fantasy settings, this is almost unheard of, unless the nation is exclusively made up of dark-skinned people. It also gave us a particularly loveable female knight who is hearing impaired – though I’ve found that every character in this series is loveable, even the antagonists. What brought particular joy to me was watching this character speak so expressively through sign, sometimes without another character vocalising for them, and never with any subtitles. The incredible effect of this is that the viewer begins to learn her sign, and when it is not translated, is excited to learn it. I can only imagine how exciting these extra bits of dialogue are to viewers, especially children, who communicate through ASL themselves and almost never see themselves represented.

Season two introduced a character with lesbian parents, who’s heroic demise is shown in flashback. Though this certainly falls into the Kill Your Gays trope, it doesn’t make them any different from most of the parental figures on the show, who are either heroically dead, toxic, or estranged.

This third season gave us something which is extremely rarely seen in children’s media – a male couple who are not just wholesome chaste companions, but shown sharing a passionate kiss. The Dragon Prince has a few ley lines which connect its various characters, arcs, and history. These are:

Questioning Deeply Held Beliefs. It is established from the start that humans are appropriators, who steal and corrupt magic because they cannot wield any on their own. There is nothing in the continuing establishment of the lore to refute this. Yet, one of our main characters discovers he is capable of innate magic through study and concentration. At this time, there is no explanation as to why this has happened. There is no Chosen One motif, no mystery of his birth – simply a passion to learn, and to question the status quo.

Being the First Generation to Break a Cycle of Violence. The main premise of The Dragon Prince’s politics involves a small group of young people trying to stop a war which has been perpetuated by the generations that came before. But it appears in other places too – for instance, the child queen who lost her lesbian mothers is told that her parents would have wanted her to arm her nation for war, and answer the call of her allies. She agrees. Yes, that is what her mothers would have wanted. But they also raised her to be her own person, and her own judgement was to say no to war. It is not a betrayal of her family’s values, but her own way of expressing her independent ones. Before there is ever any hope for peace, The Dragon Prince shows us an assassin refusing to kill in cold blood, a child caring for a baby dragon who is the offspring of the dragon who killed his mother. A regiment of soldiers who lay down their arms and are branded cowards for refusing to fight a war they do not believe in. The show shines with small acts of gentleness that require great bravery.

Recognising Toxic Behaviour in a Loved One. Season three takes on a topic which is almost never handled by children’s media with any subtlety or realism: Being gaslit by a toxic parent. In Disney’s Tangled, our heroine needs to be a naive, isolated shut-in to be duped by her mother and not considered a complete idiot. The mother is earmarked for villainy to the audience from the very beginning, and therefore they learn nothing about how to spot a truly manipulative adult. In The Dragon Prince, Lord Viren is not depicted this way. He is styled as a villain by his profession and color palette, but so are Claudia and Soren with their respective dark magic and bullying. The three of them are depicted as more complicated than just the colors they wear. Viren’s two children are accomplished young adults with their own careers and passions, and yes, it is the cleverer one who remains trusting of him even when he has slowly turned into a monster. This is another valuable lesson – when you are the favorite child, it can be more difficult to see the warning signs, and easier to dismiss the alarm of your less-loved sibling. That is perhaps the most difficult lesson The Dragon Prince manages to get across – someone can truly love you, and be a villain too.

The pattern the antagonists in The Dragon Prince go through is almost a mirror opposite of Steven Universe, which presents binary evildoers and slowly reveals there is more to them, and inevitably, gives them all a chance to redeem themselves. The Dragon Prince Begins with a vast array of characters from different sides of a political conflict, some with duties to their nation, their race, their profession, or their family. As the plot develops, decisions need to be made, and lines in the sand need to be drawn. Some give up duty to better serve their moral compass. Some manipulate their position to achieve their goals. Characters who were once troublesome to the protagonists come to fight for them, and some who were beloved turn into radicalised monsters.

It is very rare that a piece of media for children should pull no punches when it comes to the hard lessons one learns when growing up. Your nation is not always good. Your family is not always right. And sometimes being kind is the hardest thing you can do.