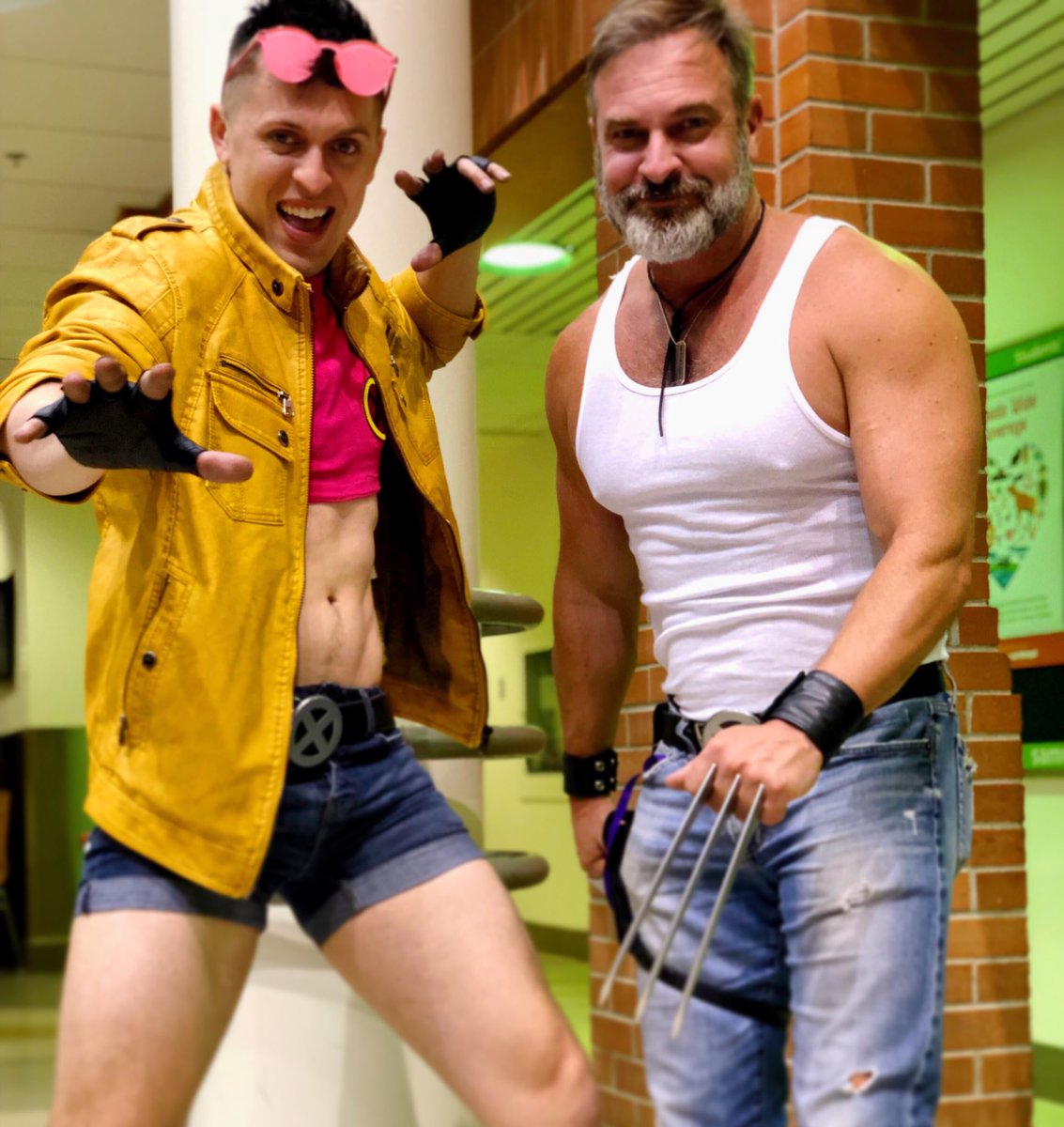 “Your Post Goes Against Our Community Guidelines.”  This message and ones like it have become increasingly familiar to queer people using social media platforms like Instagram, Twitter, Facebook, and YouTube.  Queer sexuality on the internet has become more of a hot button issue than ever, particularly in the wake of FOSTA-SESTA aka the Stop Enabling Sex Traffickers Act.  This piece of legislation, nominally intended to protect underage people from sex trafficking, has had a chilling effect on sex workers in particular and sexual content—especially LGBT sexual content—in general.  (Just look at Tumblr, the once hip micro-blogging platform that’s been hemorraghing users following their controversial ban on sexual content.)  I reached out to a number of queer social media users to get their perspective on this issue.

Amp Somers is a kinky sex educator who runs the popular Watts the Safeword channel on YouTube—he’s also a card carrying geek, frequently dressing in sexy cosplay or teaching viewers how to do Avengers-inspired bondage.  Fwee Carter is a photographer and frequent Flame Con tabler whose work includes the Sexy Nerd Project, featuring attractive guys dressed as everything from Ghostbusters to video game characters. The Side Kink is a gay Latino kinkster and academic who “enjoys playing the defeated hero, abducted sidekick and more”; his sexy, handmade cosplay creations have graced Flame Con on numerous occasions.  Peter Clough is a genderqueer artist interested in BDSM and gender representations, as well as an avid Magic: the Gathering player.  All of them have encountered censorship online to varying degrees.

“[There’s been an increase in censorship]to the point where [Instagram] allows harassment from conservative users who flag entire accounts,” Amp states.  “My personal account @PupAmp had a number of posts removed/flagged on Instagram. Many pictures have been removed for reasons from ‘inappropriate content’ to ‘pornography’ to even ‘including children’ in a post. Keep in mind all posts have been of me and only me and cropped out what is considered ‘inappropriate’ by their site.”

Carter shares the frustration.  “They have even started to ban the peach and eggplant emoji’s,” he comments.  “It’s getting really bad.”  Carter’s photos are sometimes risqué, but never pornographic.  That didn’t stop him from getting flagged frequently, to the point where he created a separate account,@lewdshoots, which was subsequently shut down.  (He’s since moved it to Twitter, which is very lenient regarding sexual content.)  Meanwhile, Facebook deleted his photography page and refused to reinstate it.

“I have seen straight cosplayers have lots of content that runs the gamut from romantic to risque, cheeky to comical and I never really see them noting how often they get flagged,” the Side Kink explains.  “Meanwhile queer cosplayers and content can feel like its toeing a very thin line.  They don’t even have to have another person in the photos and just have a suggestion of a bulge and it gets flagged.”  The Side Kink has had his Instagram threatened with suspension on a few occasions after posts were flagged as “inappropriate.”

Account suspension is an especially big fear for Clough, whose Instagram @cloughabunga promotes his exhibitions.  “It’s nerve-wracking because as an artist I really rely on it,” he explains. “I’ve made a bunch of sales through Instagram and connected with galleries and curators so the idea of losing my account is actually terrifying.”  Avoiding suspension is easier said than done when making art that involves BDSM, gender, and sexuality: “my content is extremely sexual but also professional,” he declares. He has a separate, personal “finsta,” or alternate account focused on his sex life, but it’s the challenges to his main Instagram that truly rankle him. “When it’s on my finsta and it’s just smut I don’t get too bent out of shape, even though that kind of censorship really shapes people’s understanding of what forms of pleasure can be valid and acceptable,” he muses. “Erasing images of things is a lot like erasing the things themselves. But also when I’ve got a giant butt plug showing under my thong I can’t get too shocked that the world can’t handle it, as sad and puritanical as that is. But when it’s artwork, it really pisses me off, even though I’m not actually sure what the difference is.” Clough recalls a recent experience wherein he posted his friend Patrick McNabb’s “amazing show at [Brooklyn’s] Haul gallery and the images were instantly removed. There wasn’t even any nudity. I appealed the censorship, and eventually Instagram restored the post, with a sort of thin ‘apology.’ But that was a few days after I’d posted it, and the way their algorithms work, basically no one saw it anyway. That’s what’s so insidiously effective about censorship: once it’s removed, no one knows it was ever censored.”

Amp was similarly rankled by the demonetization of his YouTube channel, which prompted him to join other LGBT YouTubers in suing the company last August. He and co-plaintiffs like Lindsay Amer (Queer Kid Stuff) charged that the platform was systematically discriminating against LGBTQ content by automatically flagging videos tagged “gay,” “lesbian,” or “bisexual” as explicit and/or offensive—resulting in lost ad revenue, making them difficult for users to find, and other negative consequences.  It was Amp’s tweets about the situation that inspired this piece.

So why the increase in censorship?  A couple of my interviewees pointed to the passing SESTA/FOSTA in 2018.  “Sites became terrified of being accused of engaging in sex traffic and tamped down on any sexual content,” the Side Kink remembers. Amp, who co-hosted a talk on the subject entitled “Fuck Your Community Standards,” says that “SESTA/FOSTA actually goes after sex positive content in all forms. From sex education to ethical sex work.”

Amp agrees. “The number of posts I see on Facebook that feature death, suicide, even abortions are astounding,” he remarks. “But the second I promote sex education or sex positive resources, websites or photos, I can see a drop in engagement or, at times, a full removal of a post just because it featured a ballgag in the photo.”

Clough sees a compelling, if troubling, explanation for this. “Images of violence reinforce our need for a police state and are therefore way less threatening to the existing power structure,” he feels. “Images of radical sexual freedom are deeply threatening by showing how oppressive that same police state really is.”

A few of my subjects attribute the censorship to a cultural shift as well as to the transformation of the internet and its platforms into a business.  “I think a lot of social media was something of a no man’s land [in the beginning],” muses the Side Kink. “When these sites and apps were developed there wasn’t a clear sign of how people would use them or even if they’d take off. As social media has become a form of communication that is more universal and more profitable companies have stepped in to make their apps appeal to the masses. These masses tend to be cis-heteronormative and steeped in a view of sex that shuns queerness and kink.”

Clough is unequivocal in his assessment: “Instagram is a deeply homophobic and sexphobic platform,” he says. “We’re seeing a shift in our whole culture to the right, and sexual freedom is very threatening because it can be a model for other kinds of freedom, like freedom of thought or freedom of choice. Neither our government nor the corporations that shape it have any interest in promoting those kinds of freedom, so censorship is a valuable tool for policing everything. The scary thing is that this sort of censorship also comes from within the gay community as well. It’s fine to put on a harness at a circuit party, but actual sexual freedom and liberation are just as threatening to mainstream gay Instagram influencers as they are to the corporations who sponsor them.”

Amp is particularly frustrated by the way social media scrutinizes LGBTQ folks more harshly than straight ones.  “Large creators like Kim Kardashian, or YouTube personalities like Trisha Paytas get away with what comes down to nudity on their profiles, which are constantly in my recommendations on websites,” he grouses. “Other straight leaning influencers can post ‘artistic nudes’ and have no problems, but LGBTQ or even sex workers who follow the rules have it much harder.”

The issue may be less about straight vs. gay or violent vs. sexual, but rather about the changing state of the internet itself. As Clough says, “the real problem isn’t one specific kind of censorship, ultimately. The problem is that the idea of public space has shifted into the digital realm but is controlled by private, for-profit corporations. Let’s be clear: Instagram isn’t a neutral platform, it has a specific agenda. We have no say in the values or representations that Instagram is pushing. The function of these spaces isn’t ultimately to share images; it’s to police them.”  For queer communities, who have always challenged and subverted cultural norms, that may be the biggest threat of all to free and open expression.