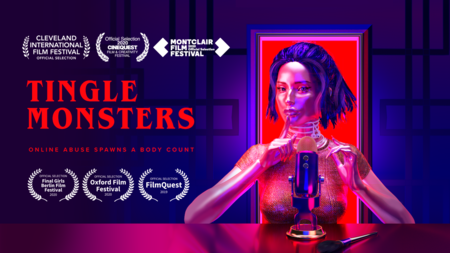 Great horror has come out of extremely limited resources and production values many times over the years; it’s also often fueled by tumultuous time periods.  So it seems fitting that the COVID pandemic and ensuing quarantine have led to multiple, literally homemade horror short films.  Many are engrossing and inventive, and taken together, they’re a powerful reminder of the resilient power of art even in the most trying circumstances.

The first “quarantine horror” short I saw was gay director Michael Varrati’s Unusual Attachment. Handsome Ben Baur stars as Hunter, a guy desperately seeking a missed connection on a Chat Roulette type site.  Along the way he gets video calls from his sassy friend Mateo (Francisco Chacin) and his cheerfully inappropriate aunt (Sleepaway Camp’s Felissa Rose, who basically plays her delightful self).  It feels like a frothy queer comedy, until things abruptly shift into more sinister territory.

Shazam director David F. Sandberg, who originally broke big with his scary short Lights Out, has made two creepy shorts during lockdown, Shadowed https://youtu.be/8yu5ymbIjaYand Not Alone in Here with his wife Lotta Losten.  Losten also stars in the simple, punchy productions, and she’s a compelling and likeable lead.  Shadowed is the best—its premise of shadows that don’t seem to belong to anything in the “real” world is fun and unsettling.  But both shorts are enjoyable; there’s a bit with a cell phone camera in Not Alone in Here that pays off wonderfully.

Rob Savage’s untitled Twitter short combines a computer-based, Zoom chat approach with the simplest of horror premises: investigating creepy sounds in the attic.  As the director’s friends watch nervously, he ascends the ladder to his attic with butcher knife and smart phone in hand.  Needless to say he finds nothing good.  It’s the only one of these shorts that actually made me scream, which brought my partner running into the room.  When I told him why he cracked, “’Did he just cut his arm off?’ ‘No, just a video on the internet.’”

3rd Eye Cult Murders is perhaps the most unique of all the quarantine horror shorts.  Directed by Todd Spence, and written by Spence and Zak White, it purports to be crime scene footage from a 1970s murder committed by a Manson-like cult.  The ’70s production design is spot on, from board games to Band Aid packaging to a rotary telephone; it really does look like footage recovered from the era.  Spence and White evidently have practice, as they regularly post short films @midnight_video on Instagram.

A couple of horror shorts eschew scariness for laughs. There Can Be Only One, directed by Mike Mendez (Big Ass Spider!) is a thoroughly enjoyable romp pitting Mendez, playing himself, against an Oreo snatching Guillermo del Toro action figure in his memorabilia filled apartment.  Taking control of one of his Pacific Rim robots, Guillermo rants that “there can be only one” Mexican filmmaker, and announces his intentions to “production design the world!”  There’s lots of action, some of it quite hilarious, involving puppets, toys, and animation, with references to classics like Aliens, Robocop, and Back to the Future thrown into the mix.  In The Egg, Canadian filmmaker Naoki Otsuki imagines the horrifying perpective of an egg waiting to be cracked, and scores the proceedings with some killer John Carpenter-esque synth music.

The only one of these shorts that utilizes exteriors is Prague’s Coronapocalypse, directed by Paul Dean and written by Scott Lee Hansen.  Relatively long at over fourteen minutes, the film concerns a young woman who ventures out of her apartment for the first time during the pandemic and is unnerved by the empty city she finds.  Constantly broadcasting online to a multitude of followers, she tries to turn to them for answers while espousing her bizarre conspiracy beliefs about the moon landing, “lizard people,” and the like.  It’s a sly commentary on people who’d rather believe fringe theories than an all too real pandemic, and our particular social media moment.

Tingle Monsters is similarly pertinent to our current online reality. Written, directed by, and starring Alexandra Serio, it’s billed as “the first ASMR horror film.”  It wasn’t actually produced during the lockdown, but it may as well have been.  Its set-up is incredibly simple: Serio is a popular ASMR vlogger delivering her first webcast after a long absence.  Disturbed by a follower’s inappropriately sexual comment, she’s then oblivious to a presence in her apartment even as her fans furiously type worried comments.  Serio uses an exercise with a makeup brush to set up a fantastically suspenseful game of peekaboo with the intruder.  Tingle Monsters works as both a fun suspense piece and a commentary on the toxic nature of the internet.