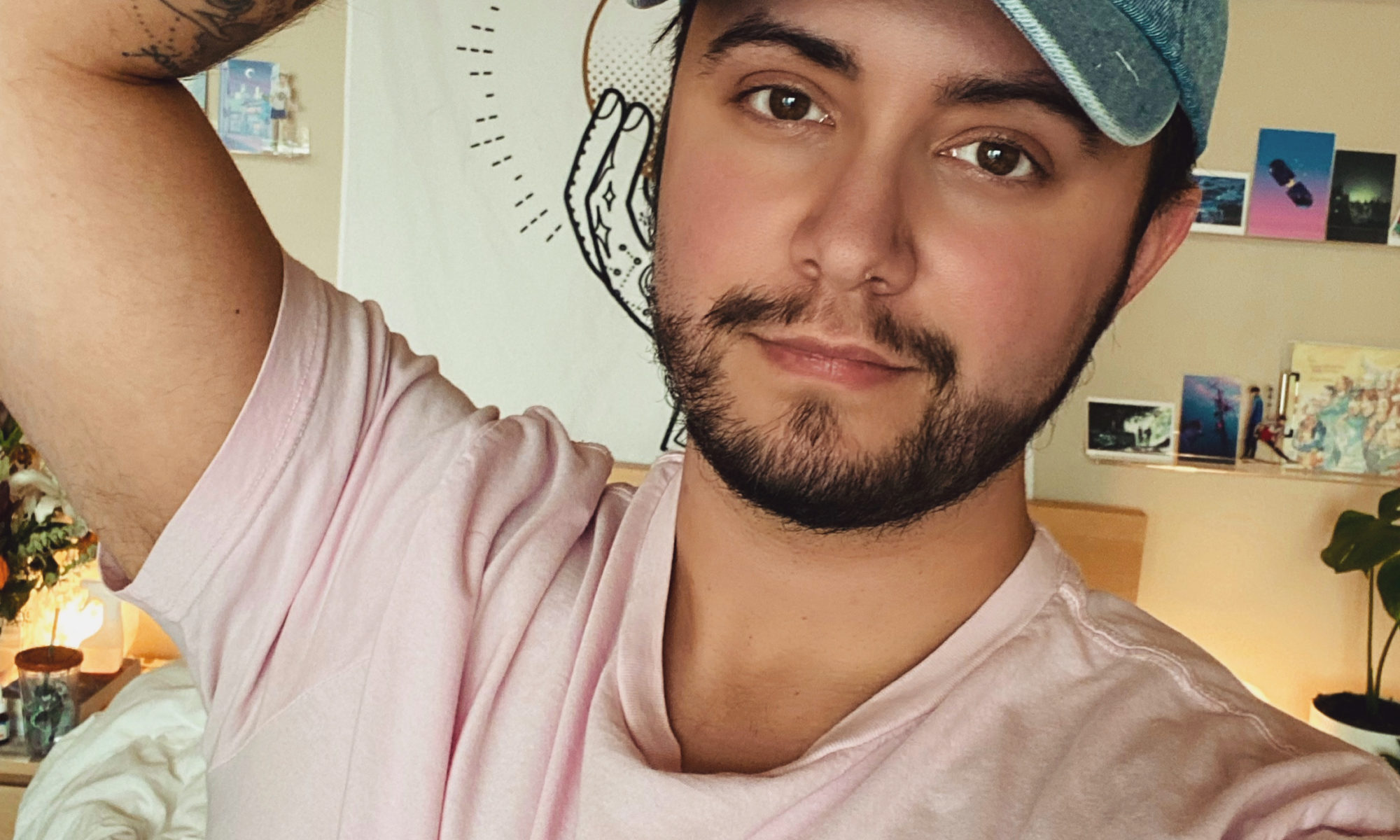 Aiden Thomas, author of Cemetery Boys, received their MFA in Creative Writing from Mills College. Born in Oakland, California, Aiden often haunted Mountain View Cemetery like a second home during their misspent youth. As a queer, trans Latinx, Aiden advocates strongly for diverse representation in all media. Aiden is notorious among their friends for always being surprised by twist endings to books/movies and organizing their bookshelves by color. When not writing, Aiden enjoys exploring the outdoors with their dog, Ronan. Their cat, Figaro, prefers to support their indoor hobbies, like reading and drinking too much coffee. I had the opportunity to interview them which you can read below.

How would you describe yourself to someone you’ve never met? What are the first things you would want someone to know about you?

Hello! I’m Aiden Thomas and I am the New York Times bestselling author of “Cemetery Boys” and soon to be “Lost in the Never Woods”! I’m a queer, trans, Latinx author and, unfortunately, I’m also a Disney Adult. I was born and raised in Oakland, CA but moved up to Portland, OR about 4 years ago. I love anime, I’m afraid of wolves, and I’m a night owl which is when I get most of my writing done!

Your debut book, Cemetery Boys, seems to have a unique origin, stemming from a Tumblr writing prompt. Could you tell us more about that?

That’s true! “Cemetery Boys” was inspired by a writing prompt I saw on Tumblr — I follow a bunch of writing prompt blogs and one day as I was mindless scrolling, I saw one that said, “What would you do if you summoned a ghost and you couldn’t get rid of it?” A lot of folks replied with scary story ideas with lots of Paranormal Activity type events, but my brain went, “Yes, and what if he was cute?” From there, I knew if I was going to have a Latinx main character and ghosts were involved, I wanted the book to revolve around my favorite holiday, Dia de Muertos.

As the first trans author to have a trans-centered fiction book on New York Times Best Seller list, how do you feel about the legacy of that impact? And what do you want to see for the future of trans narratives?

Honestly, it was completely wild and unexpected. I don’t think me or my publishing team thought “Cemetery Boys” would take off the way it did! I didn’t even know that a trans-centered fiction book had never hit list until like a month beforehand, and when “Cemetery Boys” did, it was incredible but also disappointing that it had taken this long. Honestly, I don’t really think of it as me “paving the way” because these stories have been written for a really long time. I like to think of it more as me shoving my shoulder into the publishing door and sneaking as many other trans and BIPOC authors as I can with me.

In your bio it is stated that you are a graduate of the MFA Creative Writing Program from Mills College. Could you tell us about some of your grad school experiences for those out there considering a supplementary education?

Grad school was really difficult! It was a great way to produce writing. I wrote five short stories that were published in literary journals during my grad school studies, which was fantastic. However, I’m also a firm believer that you don’t need to go to college or grad school to be a good writer! There’s so many free or cheap resources to help you learn craft that you don’t need to drop thousands of dollars on. One of my favorite resources is Jessica Brody’s “Save the Cat Writes a Novel” series! She has some Udemy.com courses that I take every time I start a new project and it’s honestly been life changing!

Speaking of MFA programs, your second upcoming book, Lost in the Never Woods, was your thesis project, correct? What drew you to the story of Peter Pan, aside from the fact that the book copyright expires very soon? Are there any other fairy tales or myths you might be interested in exploring in the future?

That’s true! Honestly, the inspiration for “Lost in the Never Woods” was definitely the slow and creeping kind! I loved the Disney film as a kid (I’ve recently learned kinship with Peter is a very common experience among trans masculine folks!) and had the BIGGEST crush on Jeremy Sumpter in the 2003 adaptation. There’s also some incredible lines in that movie, but the one that really stuck out to me was when Peter says, “I want always to be a boy, and have fun.” And Wendy replies, “You say so, but I think it is your biggest pretend.”

That concept that Peter was trapped in Neverland, that he had some sort of duty to the Lost Boys when he was clearly so drawn to Wendy, stuck in brain. I wanted to know why he was in Neverland, what it meant for him to be afraid of his feelings, and what this concept of growing up really meant to him. I read the original “Peter Pan” quickly after that and learned how really dark the canon is how, and how deeply troubled and traumatized Peter was. I was really interested in his mental and emotional turmoil, which led me to wondering, “What happened to Wendy after Neverland?” and that was the real beginning of “Lost in the Never Woods”.

There are TONS of stories I’d love to do retellings of! There are some Greek myths I’d love to put a contemporary twist on, like Hercules and Icarus. I also love fairytale retellings and have been toying with a “Beauty and the Beast” retelling in my head

Besides the Day of the Dead festival, what other holidays do you think the characters of Cemetery Boys would gravitate towards and in what ways would they celebrate?

Nochebuena, or Christmas Eve, is a HUGE holiday in my family! There’s always huge parties that go late into the night so kids can open presents at midnight, and just SO much food! It’s my second favorite holiday after Dia de Muertos. Both Yadriel and Julian’s families would definitely celebrate and go all out. I think they’d start the night with Yadriel’s family at the cemetery to do all the official pomp and circumstance but close out the night at Julian’s apartment. Yadriel and Maritza would be crowded into the tiny living room with Julian, Rio, Flaca, Rocky, Omar and Luca opening presents and eating lots of Rio’s famous chocolate box cake.

As a writer, what advice would you give to other writers who are stepping into their own creativity? And advice to those interested in representing their own backgrounds/cultures?

FINISH YOUR FIRST DRAFT! I feel like writers always ask for advice when it comes to improving their story, but you have to get that rough draft down before you can make it better. The hardest part is finishing that manuscript, and you can query or get published until you have a completed draft to work on! When it comes to representation, I think creating stories and writing about your lived experiences is really powerful, especially when you’re marginalized. There’s young adults out there who haven’t seen themselves in a book, and you can make that happen.

One of the lovely things about your book is multilingual inclusion of different languages? Can you talk about how you incorporate them, and is the significance of this inclusion to you?

There’s a real push and pull when you have multiple marginalized identities. Being trans and part of the Latinx community can be very complicated for a lot of different reasons, a large one being that the Spanish language is gendered. Because of that, there’s much more instances of being mis-gendered within the Spanish language as opposed to English. The family and cultural dynamics can also be incredibly complicated. For “Cemetery Boys” it was important to me to show that and to also use Spanish casually and without translations, as it should be.

As a self-proclaimed geek, are there any anime/manga/cartoons you are drawn to at the moment?

Oh my gosh, I’m fully obsessed with “Haikyuu!” and “Given”! I haven’t been able to watch much since I’m on deadline right now, but as soon as I get a break, I’m really looking forward to binge watching “My Hero Academia”.

I’m currently working on the next book in my upcoming duology that’s due April 1st! It’s a young adult fantasy series that’s Percy Jackson meets “The Hunger Games”. I came up with a Latinx-inspired pantheon (like a goddess of Pan Dulce and a music god named Mariachi) and creation myth which was a lot of fun. It’s about demigods in a life-or-death competition and I am SO excited to share more about the story when I can.

“She’s too Pretty to Burn” by Wendy Heard is coming out in March 2021, which is a YA thriller I absolutely fell in love with. Also be on the lookout for “Fifteen Hundred Miles from the Sun” by Jonny Garza Villa (my new ultimate favorite queer romance!) and “Meet Cute Diary” by Emery Lee (if you like romance tropes, you’re going to LOVE this book!).