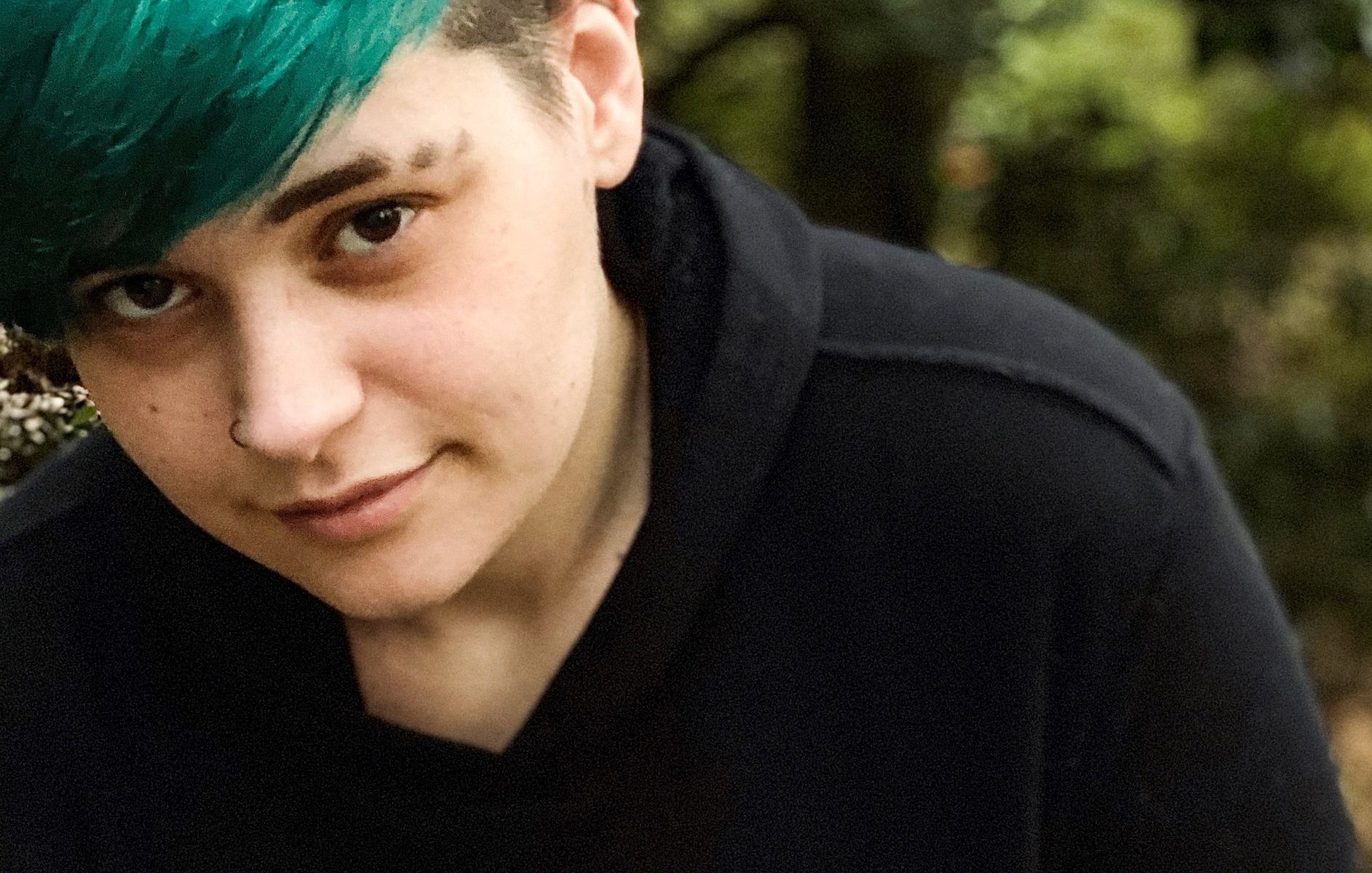 H.E. Edgmon (he/they) is a high school and college dropout, a militant queer, and an author of books both irreverent and radicalizing. His stories will always center the perspective of Indigenous people, trans people, and survivors of trauma. At present, he’s probably biting off more than he can chew, emulating the aesthetic of Dwayne from The Lost Boys (1987), and living out the found family trope in Brooklyn. Online, he can most often be found on Twitter @heedgmon. His debut novel, The Witch King, is available now. I had the opportunity to interview him about his new novel, which you can read below.

First of all, at what point in your life did you realize you wanted to be an author? What drew you to this medium of Young Adult literature?

As soon as I realized it was possible to be an author, that’s what I wanted to be. I was always incredibly escapist as a child. I didn’t like my life—I felt like I’d been born into the wrong world, with the wrong people, or overall the wrong set of circumstances. So, I made up new versions of reality in my head. I lived almost entirely in my own imagination. And that’s probably what draws me to writing for teens, now. The YA age is when I needed these stories the most.

What were the first stories to draw you in and what kind of stories inspire you today?

There are some really beautifully done and important contemporary stories out there, but fantasy has my heart and always will. I grew up on things like the Dragonlance Chronicles. Sprawling new worlds filled with magic, found families going on epic adventures, and seemingly no limitations on what could happen. These are still the kind of stories I want more of, though now I want them gayer.

Where did the inspiration for The Witch King come from? Was there any media (i.e. books, films, music, etc.) that influenced you while writing it?

You’ll actually find a lot of popular fanfic tropes in TWK. At the time I wrote it, I was reading way more fanfiction than traditionally published books, and I honestly really like the way that influences the writing. Also, Halsey’s entire discography is basically Wyatt’s inner monologue.

Your debut novel tackles a lot of serious issues related to mental health and trauma? What was it like writing that into fiction, and what advice might you have for writers who might want to tackle that in their own work from a safe distance?

I wrote this book while I was actively unpacking a lot of my own trauma in therapy, and that probably comes as no big surprise to anyone who’s read it. It offered a space for me to explore my feelings and come to realizations about experiences I wasn’t ready to consciously acknowledge as my own. Looking back, actually, I realize I wrote a lot of myself into Wyatt that I didn’t even recognize as me when I first wrote it.

Unfortunately, I don’t have advice about tackling these issues from a “safe distance.” Because it didn’t feel like a safe distance. Working through trauma on the page was uncomfortable and vulnerable, in the end, and it forced me to start working on myself in ways I’d been inadvertently putting off for years.

I absolutely encourage people not to hold back in their writing. But also be prepared. Once you open up that door, there’s probably no going back through it. Whether you’re ready or not.

As an ace reader, one of my favorite parts about the book was the strong relationship between Wyatt and his best friend, Briar? Was centering platonic relationships as important as romantic relationships always a goal of yours, and could you call their relationship a queerplatonic partnership?

Yes! As someone on the ace and aro spectrums, who has practiced non-monogamy for over a decade, it’s always been important to me that there is no relationship hierarchy in my work. (IE—romantic relationships are not inherently considered more important than friendships.) Wyatt and Briar are soulmates. She’s the most important person in his life, and probably always will be. Now, that doesn’t mean their relationship is perfect, or even always healthy. They’re both children with a lot of growing up to do, and Wyatt specifically has a lot of issues to work through, at the start and end of the book. But this is a queerplatonic relationship, absolutely.

As a trans author of indigenous (Seminole) descent, you had discussed a bit online about the need for more trans and indigenous/ Native American representation? Could you take about your personal connection to that and what you wish to see in the world of literature/media?

We’ve seen a rise in trans protagonists lately, but, the vast majority of the time, they’re written into stories where their transness is the driving force of the plot. Contemporary “issue” books, if you will. These stories are important, and necessary, and can be incredibly powerful and life changing for many people. But they’re not the kind of stories I was interested in reading as a teen, and they’re not what I want to write today.

Meanwhile, Native protagonists are rarely allowed to exist in fantasy unless their ancestry is plot-relevant—if the story draws on Indigenous mythologies or traditions, for example. And again, these stories are important and necessary and I don’t want to minimize them at all. But it does make me sad they’re (almost) the only Native rep we get in this space, because so much of the knowledge needed to accurately write those stories has been lost due to colonization.

With both trans and Native rep, I wish we saw more stories about characters who just were these things, whose choices and thoughts and feelings were informed by these things, but whose stories didn’t have to be all about them.

Within The Witch King, you discuss something that’s still rare to talk about, which is parenthood for trans people? What made you decide to talk about this, and has your own experiences as a parent affected your writing process?

The fact that I was pregnant when I wrote this probably had something to do with it. Oof. You know, everyone’s going to read this and realize how 75% of my writing process was just projecting. Ah well.

On the other hand, pregnant or not, it was always important for me to confront the idea of biological realities for trans people. Something that we hear a lot from transphobes is that we can’t change our biologies, no amount of surgery will make us another sex, etc. And I wanted to look directly at that line of thinking, make eye contact with it, and say, “Okay, and? He’s still a boy.” Wyatt could carry Emyr’s children, if he wanted to. That doesn’t change anything about who he is.

Besides the much anticipated sequel to The Witch King, do you have any more ideas in mind you feel free to talk about?

I would really love to write in both the middle grade and adult spaces, in addition to continuing my work in YA. And I definitely have plans to do all of that—just none I can talk about right now!

What advice would you have to give to authors, especially debut ones like yourself?

This sounds really counter-intuitive, because publishing is an industry that demands so much of us in so many ways, but I highly encourage authors to find something they love more than writing. Something they know will always be there. Because this business is full of highs and lows, dramatic ones, and when your entire life revolves around it, the lows can be soul-crushing. It has been invaluable for me to be able to walk away from my computer, set aside my work for a while, and go do something else that brings me joy.

There’s a book called Hell Followed With Us that’s coming out next summer, from debut author Andrew Joseph White. It’s a YA post-apocalyptic horror with a trans main character, and it’s as beautiful as it is horrifying. I cannot stress enough how badly you all need to add it to your TBRs and preorder as soon as it’s available.