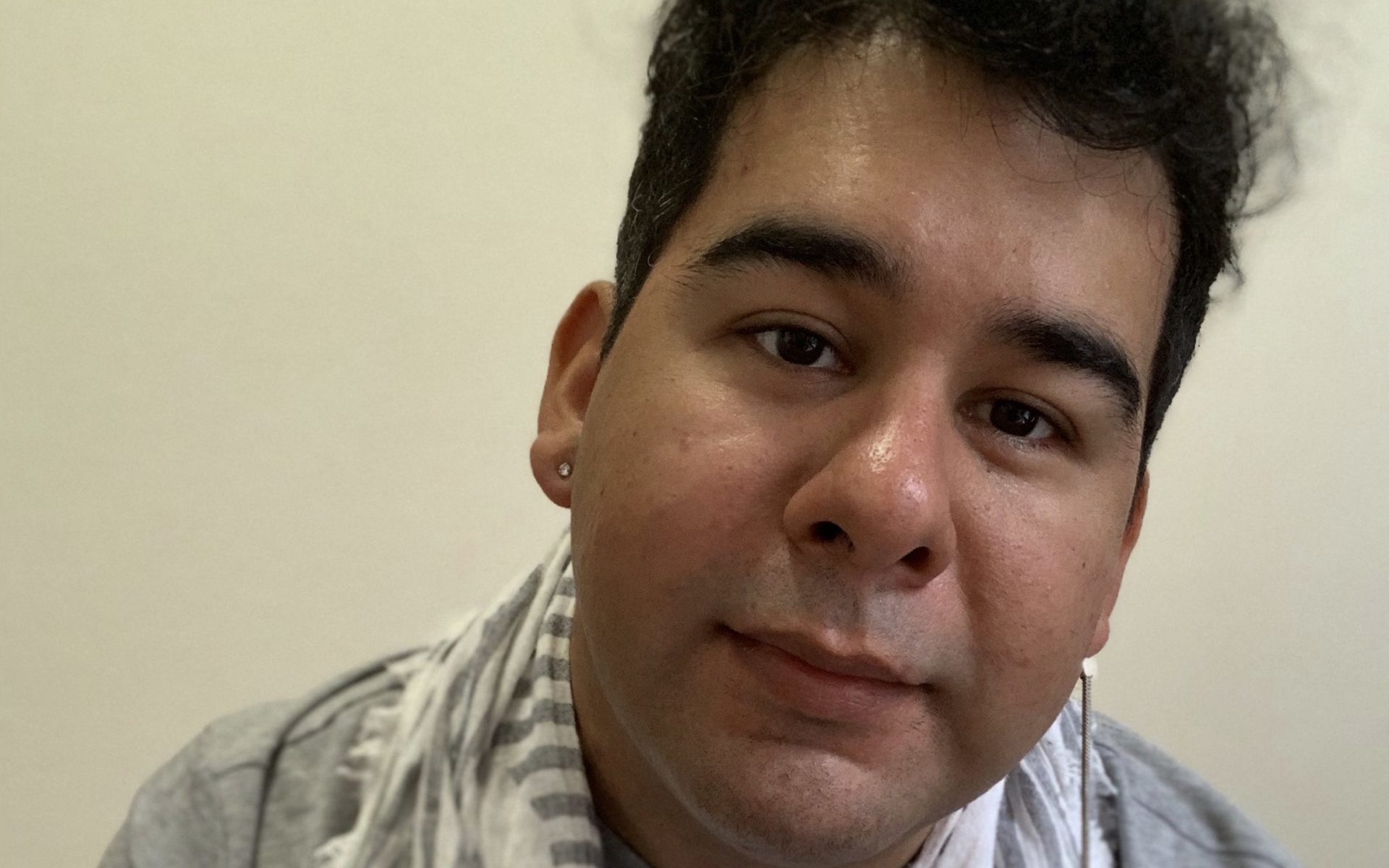 Jonny Garza Villa is a product of the great state of Texas, born and raised along the Gulf Coast, and a decade-long resident of San Antonio. They are an author of contemporary young adult fiction that maintains a brand of being proudly Latinx, and the most queer, and embracing the power and beauty of the chaotic gay. Fifteen Hundred Miles from the Sun is their debut novel. I had the opportunity to interview Jonny regarding their debut novel, which you can read below.

First of all, congratulations on your debut novel, Fifteen Hundred Miles from the Sun. Could you tell us a little of what it’s about?

Thank you so much! I like to call Fifteen Hundred Miles from the Sun part of my own adolescent traumas, part Selena’s “Dreaming of You,” and part Patrón. It’s a coming of age, contemporary romance that follows Corpus Christi, Texas teen Julián (aka Jules) Luna, who’s just trying to have a lowkey senior year, hang out with his friends, get into UCLA, and finally be able to move away from all the environments that have kept him closeted his entire life. That is, until he accidentally comes out as gay on Twitter after getting tremendously drunk at a party. And in the days and weeks and months that follow, Jules will realize all the good that comes from allowing ourselves to live openly and authentically—like having a long distance Twitter crush slide into his DMs—as well as the bad, like figuring out how to come out to his extremely machista dad.

Where did the inspiration for this book come from? Were there any books/media/music that inspired you prior to or while writing it?

Fifteen Hundred Miles from the Sun was hugely influenced by Simon Vs the Homo Sapiens Agenda by Becky Albertalli, as well as its film adaptation, Love, Simon. I love both of them so much, but they also left me with the question of what would Simon Spier’s journey look like if he was a Chicano kid living in a socially conservative, Mexican, Catholic household in South Texas? Because there would absolutely be drastic differences, and I felt like there needed to be something that gave queer Chicane and Mexican American youth the same chance to see ourselves as Simon did for so many.

Also, specifically with characters, On My Block had a lot of influence on a couple in particular. I like to say that Jules is very much like Ruby meets Simon Spier, and his friend Lou takes a lot of influence from Jasmine and how wildly and wonderfully chaotic she is.

Constantly changing. I pantsed Fifteen Hundred Miles from the Sun, which basically means I came into it with a very vague, basic idea of what I wanted the story to be and then just started writing it without any sort of outline. Even my second book, Ander and Santi Were Here, was largely pantsed. However, I have started embracing the idea of outlining and, I think, all of my current projects have been plotted and thought about much more intensely before just going at it. In the end, I’m a fan of both and figuring out what works best for you, whether it’s one or the other or somewhere in the middle.

One of the hardest parts of writing a book is finishing one. Were there techniques/ strategies/ advice that helped you finish your first draft?

Fifteen Hundred Miles from the Sun is the very first book I’ve ever written and only the second idea I’d ever attempted, so I definitely went into it with very little knowledge on craft or best practices. But what I think helped was that I had a deadline. I drafted it during National Novel Writing Month, so having that set, last day of November deadline to get as much of this idea out onto a page helped keep me focused.

I’m also a big advocate of things that aren’t writing but are still absolutely creative productivity. If I was having a hard time thinking of words, I’d spend the afternoon creating playlists or listening to music that felt close to the vibe I was going for in the next scene. I’d go on Pinterest and make mood boards. I’d cook. I’d think about any random situation and how these characters might react.

A significant part of the book involves exploring toxic bonds, including family ones. If you feel comfortable would you mind discussing that a little?

Yeah, of course. So, while I love writing about the cool and beautiful parts of my culture and being Chicane, I also feel compelled to write about the not so great aspects of my community and, specifically here, that meant calling out how harmful machismo philosophy is and specifically its prevalence when it comes to raising sons or AMAB children.

Also, while I get it, I’m not huge on crappy parents in YA suddenly becoming this embracing or even at least tolerant person. Like, realistically, just because we ourselves decide we’re gonna stop hating this specific part of ourself, that doesn’t mean everyone around you jointly decides they’re going to stop hating that part of you too. And I think that needs more attention. I think it’s okay to recognize those relationships that are going to always be bad for us because that then allows us to rely on those that are good for us.

What are your favorite parts of this book and of the writing process in general? What message did you want to send with Fifteen Hundred Miles from the Sun?

I love those specific scenes where Jules is with just one of his friends. Those times with Jordan or before Homecoming with Lou or that one scene with Rolie or in the days after his birthday with Itzel. Friendship and platonic relationships were, for me, as important as the romantic plot between Jules and Mat, and in those times of intimacy between Jules and his friends, they were and are so incredibly special and meaningful for me.

My favorite part of the writing process is revisions. That feeling of knowing I’m getting closer to what a book is supposed to be is such a driving force for me.

And the message I wanted to send with Fifteen Hundred Miles from the Sun, specifically to anyone who knows what it is to be in Jules’ shoes, is that I hope you find love and acceptance in this story, even if it’s alone, in the quiet of your room, between just you and Jules and Mat and Jordan and Itzel and Rolie and Lou and Piña and Xochi. And that I hope you know that you are enough for this world just as you are.

Upon reading the book, the reader tends to notice a moon and sun theme coming up, especially with the lotería themed character art cards of Jules and Mat drawn by Mars Lauderbaugh? Where did that symbolism come from?

In all honesty, at first I thought it was just a very clever thing, personally. Like, oh what if there’s moon in his name and sun in his name? That would make me the greatest writer of all time. I’m obviously the first person to ever be this creative with language. But as Jules and Mat’s personalities began to really take shape and then I learned that there’s actually a trope that is literally sun type and moon type (absolutely crushing my ego and idea of originality), I ran with it and embraced it.

What’s a question that you haven’t been asked but wish you were asked (along with your answer)?

One thing I haven’t had the opportunity to talk about is Jules relationship with religion and specifically as a gay Catholic. While I’m not anymore, I was raised and was pretty devoutly Catholic, which left me with an appreciation for what it is at its best while also with the ability to be critical. From the beginning I knew that I wanted Jules to, one, not be a character who was trying to convince himself he isn’t gay but instead just a closeted gay boy waiting for his chance to not be closeted, and, two, that I didn’t want his sexuality to be a hinderance in his personal relationship with his beliefs. Originally there were at least a couple of scenes with him actually at Mass and pretty committed to practicing his faith. I wanted the God he believes in to be one that doesn’t care who Jules loves. I wanted to show the difference in those who believe religion to be a tool of love, like his Güelo, compared to those who use it to oppress, like his dad. And, ultimately, I didn’t want it to be a story of someone running away from their faith but as someone who knows he can exist as he is. That it was never God who was withholding love, but those who believe to know God best who are the ones withholding love and, in the end, we don’t need it from them.

To aspiring writers, I would say to not listen to anyone who says you have to write every day. Write when you’re able. Write when you feel like it. Don’t push yourself. Don’t create a relationship with writing that makes it into something you force on yourself.

And to debut authors, don’t procrastinate! Got a cool preorder idea? Want to get with a local indie for a virtual thing? Get on that now; do not wait.

Are there any project ideas you are currently thinking about and are at liberty to speak about?

One project I’m currently (slowly) revising is a rivals to lovers story that centers around high school mariachi. Big ego, Leo sun main character and a love interest who will not be pushed into the background. Less coming of age feels and more strictly romance, which has been pretty cool to write, as much as writing coming of age stories is my favorite.

And I feel like I can mention these because they’ve been brought up publicly already, but I am putting some thought into what happens after the end of Fifteen Hundred Miles from the Sun; also, there is some pondering going on about a potential co-written YA gay cowboy story with one of my favorite people that I’m very excited about.

What books would you recommend to the readers of Geeks OUT?

For contemporary, Juliet Takes a Breath by Gabby Rivera; Darius the Great Is Not Okay by Adib Khorram; Meet Cute Diary by Emery Lee; The Summer of Everything by Julian Winters; and Somewhere Between Bitter and Sweet by Laekan Zea Kemp.

For contemporary fantasy, Cemetery Boys by Aiden Thomas; Blazewrath Games by Amparo Ortiz; and The Witch King by H.E. Edgmon.

For fantasy, We Set the Dark On Fire by Tehlor Kay Mejia; Each of Us a Desert by Mark Oshiro; and Crier’s War by Nina Varela

For speculative contemporary, They Both Die at the End by Adam Silvera and The Grief Keeper by Alex Villasante

For romance that’s not YA but still has that coming of age feel, Honey Girl by Morgan Rogers