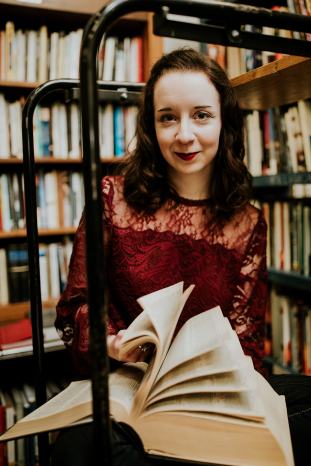 Mara Fitzgerald writes YA fantasy about unlikable female characters who ruin everything. She is a biologist by day and spends entirely too much time looking at insects under a microscope. She was born near Disney World and now lives near Graceland, which is almost as good. She is the author of the Beyond the Ruby Veil duology.

I’ve always been a writer. For me, the transition from “writer” to “author” was the one that felt like more of a change. My books were no longer a series of words on my computer that I wrote to entertain myself—they were products. In many ways, this comes with a lot of pressure, because “products” have expectations and cold, hard sales numbers. In other ways, it’s been fascinating to know that my creative work is now out there for anyone to access and interpret. As a great supporter of fanfiction, one of the most striking moments for me was when I realized that I’m now on the other side of the fanfiction equation—that is, I’m the one making the thing that people might create fan work about.

In the realm of queer media and fiction, there’s often this unspoken pressure to present the LGBTQIA+ community within the best (i.e. moral) light, given the history of queer coding in villains and other cultural factors. What made you develop this obvious queer anti-hero, and how did she come to be?

I just think villains are neat.

In all seriousness, most of my favorite fictional characters are the ones who are causing the most problems in the story, because they’re the most interesting to me. I didn’t set out to write Emanuela as an anti-heroine. Rather, the process of writing was a discovery, as it often is with characters. Sometimes it feels like they live in your head, and it’s your job to get them out onto the page as honestly as you can. This is, of course, a lot easier said than done. For a long time, I resisted letting Emanuela’s arc get so dark and messy. Even though other queer authors have already paved the way with amazing literature that’s way more complex than mine, I do still feel that pressure to create characters who are “role models.” I felt like centering the story around a lesbian who was very obviously flawed meant that she had to learn and become not only better, but perfect, and I struggled a lot with trying to fit her into an arc she clearly didn’t belong in.

A big part of fiction for me is escapism, and there’s more than one way to escape. I have never had a reader say that they literally want to be Emanuela—and if I had, I would be very concerned—but there is something escapist about her. I do not endorse being rude to everyone in your life, behaving in increasingly unhinged ways, leaving a trail of destruction in your wake, and refusing to grow as a person. But sometimes…it’s fun to read about.

What are some of your favorite examples of queer anti-heroes, villains, and heroes?

Radu from the And I Darken series by Kiersten White (definitely a hero). Villanelle from Killing Eve (definitely not a hero). And everyone in Gideon the Ninth.

Beyond the Ruby Veil seems to be set in this glamorous, alternative deadly Italy. What comes first in your writing, the world-building or characters?

They usually arrive together. I tend to write worlds that are like ours, except for one wild, highly unlikely change that actually ends up being a lot of changes. When I start with a fantasy version of Earth where something is making the way people live drastically different, the rest of the world starts to fill itself in. The characters also fill themselves in, too, because I naturally find myself gravitating towards characters who would interact with that world in the most interesting way. For instance, Beyond the Ruby Veil is about a world where one immortal, irreplaceable woman who can make water is keeping the whole city alive. Because of how my morbid mind works, my next question is: what would happen if that woman died? What if somebody killed her—and what if I wrote a story about that killer?

Would you say there’s a difference between the anti-hero and villain? What are the similarities?

My general understanding is that with an anti-hero, you as the reader ultimately want them to win. You can love a villain as a character, but you still don’t want them to win. What makes this so fascinating to me is that the lines can get blurred. A character can start out as the unambiguous villain and ultimately end up as someone who’s still very much themselves, rough around the edges and all, but who we find ourselves rooting for. Alternatively, we can start out supporting a character, knowing that they’re messy, but then things start getting messier and messier and one day we realize…we don’t want this character to win anymore.

This was my goal with Emanuela. The first time she murders somebody (not a spoiler: it’s in Chapter 3), it’s certainly messy, but there’s something there to root for. As the story goes on, she makes it more and more challenging to support her. There’s a point in the book where Emanuela says that she doesn’t care if people like her or think she’s a good person—she just wants, in essence, to be perceived. That’s how I try to write all my characters, not just ones who are crossing the line into villainous. I try to just portray them as they are, whatever that may end up looking like.

Are there any other projects or ideas you are currently nursing and would be at liberty to say?

The sequel to Beyond the Ruby Veil, which is called Into the Midnight Void, will be out in January 2022. This is the conclusion to the duology, where we will find out exactly how Emanuela’s quest for power ends. Writing it was certainly an experience, so I hope reading it will be, too!

What’s an interview question you haven’t been asked yet, but wish you were?

“How would you adapt Beyond the Ruby Veil: The Musical?” I’m so glad you asked. First, and most importantly, there would be a splash zone for all the inevitable blood coming off the stage. The story itself would be a condensed version of the entire duology—somebody much smarter than me is doing the condensing, to be clear. A lot of musicals have a very clear Event happen at the end of Act 1, and then Act 2 begins in a different place, with a different mood, and without spoiling anything, I think the transition between book 1 and book 2 lends itself well to that. The beginning would have a little bit of evil Wizard of Oz vibes, and early Wicked vibes as Emanuela sings about what she wants and how ambitious she is, but as the audience, we get the sneaking feeling this isn’t going to turn out well for her. Anyways, I’m open to all thoughts on this. I just think there’s potential!

Honey Girl by Morgan Rogers is an adult coming-of-age novel about a PhD student who accidentally marries another woman while in Vegas. Felix Ever After by Kacen Callender is a delightful YA contemporary about a transgender teen at a competitive arts school. And I just read an advanced copy of A Dark and Starless Forest by Sarah Hollowell, which is about a big queer family that lives in a spooky house in the spooky woods!