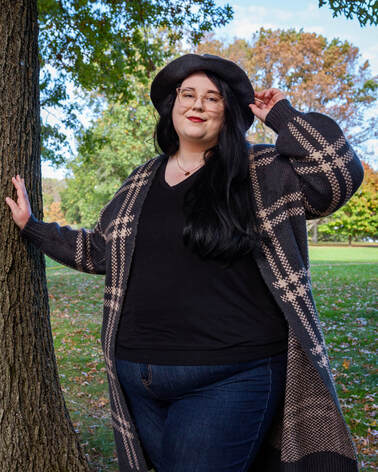 amanda lovelace (she/they) is the author of several bestselling poetry titles, including her celebrated “women are some kind of magic” series as well as her “you are your own fairy tale” trilogy. she is also the co-creator of the believe in your own magic oracle deck. when she isn’t reading, writing, or drinking a much-needed cup of coffee, you can find her casting spells from her home in a (very) small town on the jersey shore, where she resides with her poet-spouse & their three cats.

thanks so much, and of course!

my name is amanda lovelace, and i’m an author, poetess, and oracle deck creator.

i’m most known for my first poetry series, “women are some kind of magic”, which includes some bestselling and award-winning titles: the princess saves herself in this one, the witch doesn’t burn in this one, and the mermaid’s voice returns in this one. there’s also an oracle deck based on the series, believe in your own magic, which i co-created with illustrator janaina medeiros.

my more recent releases include my modern-day persephone collection, flower crowns & fearsome things, as well as my “you are your own fairy tale” trilogy: break your glass slippers, shine your icy crown, and the yet-to-be-released finale, unlock your storybook heart (march 15th, 2022).

most of my works explore things like trauma, feminism, and empowerment.

What first drew you to poetry? Do you remember any poets or poetry collections that inspired your love for the medium?

the lyrics in songs always moved my soul and helped me cope with the more serious things going on in my life, especially as a child and teen. i loved bands like linkin park and evanescence, and i eventually began writing my own “lyrics”, which i realized later were also poems.

in terms of poets, though, emily dickinson is always the first name that comes to mind. her simple-yet-intricate verses about nature, religion, and death continue to haunt me through adulthood. i’ve visited her old home in amherst, massachusetts (which was turned into a museum) a few times now, and i’m moved by the beautifully intense energy there every time.

What can you tell us about your latest book, flower crowns and fearsome things?

as you may or may not know, persephone is the greek goddess of spring as well as the queen of the underworld. on the surface, these titles directly oppose one another. how can someone frolic through a meadow yet still manage to reign over a place like the underworld? regardless of how impractical it may seem, persephone chooses to be both, embodying them for equal parts of the year.

i wanted to write a collection about a modern-day speaker who seeks to make persephone proud—embracing both the sensitive wildflower and the angry wildfire inside of her. much of it is loosely based on the myth of hades and persephone, but i would call it an archetype exploration more than anything.

the poems are a little messy and contradictory, and they’re supposed to be, because that’s the whole point of the collection: women should be allowed to be those things and so much more. this collection is me shamelessly reveling in that.

From the looks of your poetry, fairy tales seems to be strong component of your work. Why do you feel you keep getting drawn to these stories?

i’ve asked myself that a lot, haha!

i think it’s because fairy tales and fantasy books were my coping mechanisms growing up—when things felt hopeless, the magic in those stories inspired me to keep living to see another day, even if it was just to read another chapter.

since my very first collection, the princess saves herself in this one, i’ve wanted to write my past and present struggles into those fairy tales and give myself a happy ending. it gives me a renewed sense of hope, and people have told me it gives them hope, too, so i keep doing it, and luckily, people keep reading.

though my more recent collections (i.e., the “you are your own fairy tale” trilogy and flower crowns & fearsome things) are a *little* more fictional than my previous collections, there’s always a piece of my truth in everything i write, whether it’s a feeling, a belief, or a personal experience. these collections have given me the chance to explore topics that didn’t fit into other collections, so in some ways these ones feel even more personal to me, and they give me just as much hope.

Aside from fairytales, is there anything else you feel inspired by?

when i started to call myself a witch, my perspective on the world and on life itself completely changed, and i think that’s something that can easily be seen when you look at my earlier works versus now. i see the sparkle and purpose in everything, and that inspired me to create the believe in your own magic oracle deck, and it’s inspiring even more projects that i can’t wait to share! 😊

As a queer/ Aspec person, I just want to say it makes me really happy to see more asexual/ queer writers out there? Are there any times you would say this part of your identity plays into your work?

it’s not always very obvious because, well, poetry, but that piece of me is in almost every collection i write.

in shine your icy crown, the second installment in the “you are your own fairy tale” trilogy, the speaker realizes that she has “much more interesting things to do” than to kiss boys. she ultimately chooses herself, not one of the many princes vying for her attention. as the collection goes on, she makes it clear that she wouldn’t mind ending up with someone else, but she’s not totally attached to the idea, either – it would just have to be the right person, the one who will “let in more stardust than storm clouds”. that’s something i can definitely relate to as someone who’s demisexual (which is on the asexual spectrum). i view her as demisexual as well.

in my next collection (and the finale of the “you are your own fairy tale” trilogy), unlock your storybook heart, the speaker is pansexual, which is another one of my queer identities. i can’t say a lot about this project yet, but i will say that i’m super excited—and admittedly also very nervous—for it to hit shelves. sadly, some readers made it known to me that they didn’t appreciate it when the speaker in break your glass slippers (the first installment) expressed her attraction to women. i’m not going to let that hatefulness effect my work, however.

write that idea, even if it’s a little weird. (weird is good, actually.)

write that idea, even if no one else has written anything like it before. (maybe that means you should be the one to do it.)

write that idea, even if everyone around you tells you that there’s no market for it. (who says you can’t make one?)

What’s a question you haven’t been asked yet but wish you were asked, as well as the answer to that question?

Question: You co-created an oracle deck, believe in your own magic, based on your first poetry series, “women are some kind of magic”. Will we also see an oracle deck based on the “you are your own fairy tale” trilogy?

there’s nothing currently in the works, but as that trilogy comes to a close, it has admittedly been on my mind more and more. may the stars align to make that happen!

literally anything by anna-marie mclemore. they’re an extremely talented YA author, and they make me question my writing skills daily. if you’re looking for a more specific recommendation, then my personal favorite would have to be blanca & roja!

for poetry: nikita gill, renaada williams, and ari. b. cofer.