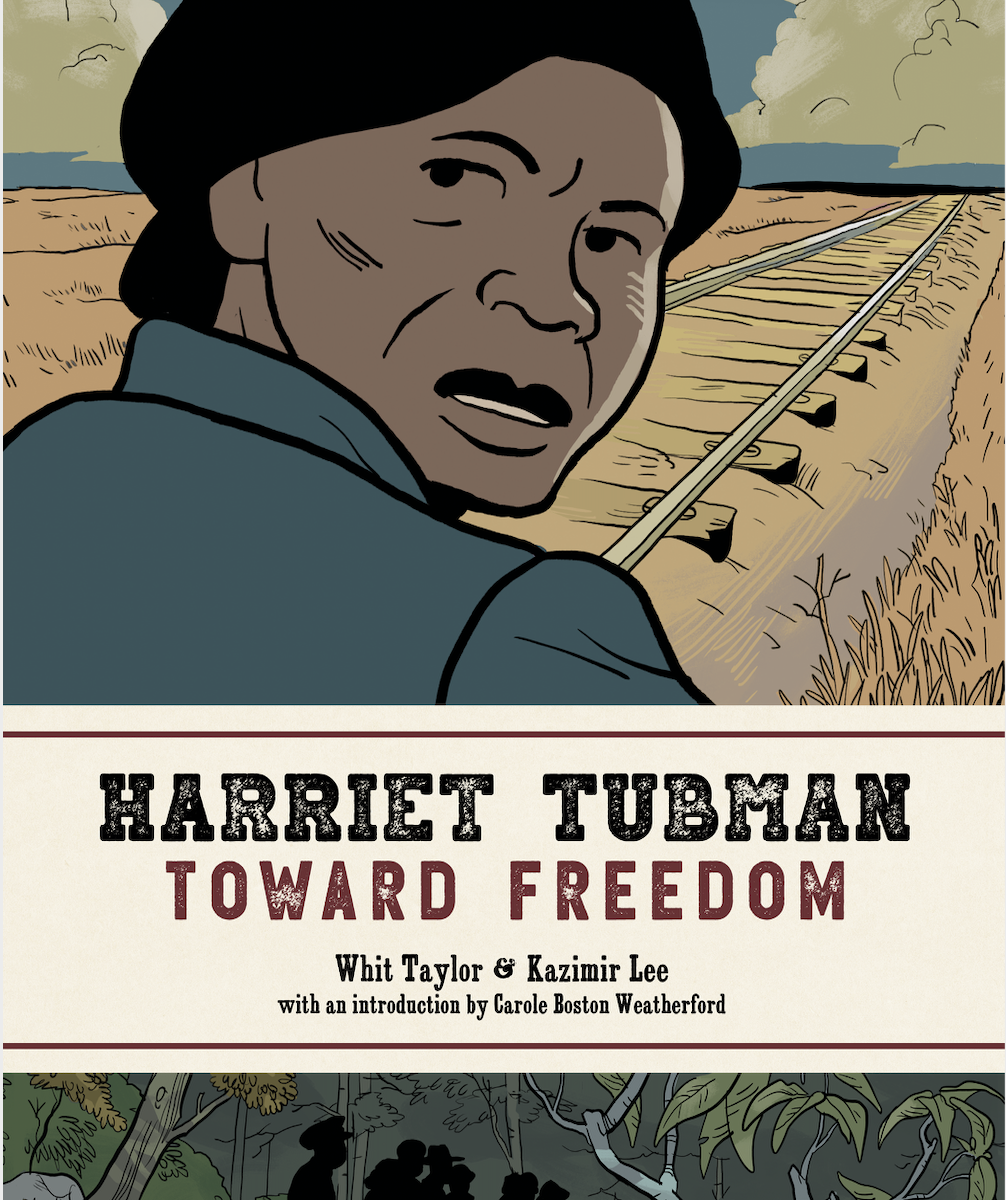 Whit Taylor is an Ignatz Award-winning cartoonist, editor, and writer from New Jersey. She has authored many comics, including the graphic novel Ghost Stories, and is a regular contributor to the Nib.

Kazimir Lee is an animator, cartoonist, and illustrator, who has lived for almost equal amounts of time in Malaysia, the UK, and the US, now residing in Brooklyn, New York.

About the Book Harriet Tubman:Towards Freedom Harriet Tubman did something exceptionally courageous: She escaped slavery. Then she did something impossible: She went back. She underwent some thirteen missions to rescue around seventy enslaved people, using and expanding a network of abolitionists that became known as the Underground Railroad. She spent her life as an activist, speaking out for Black people and women’s suffrage.

This modern account of her trip to save her brothers is detailed and authentic. Illustrated with care for the historical record, it offers insight into the life and mind of Tubman, displaying her as a woman with an unshakable desire to break the chains of an unjust society. It is a perfect anti-racist narrative for our times and deepens an understanding of just what freedom means to those who must fight for it.

How did you come to find yourself working in comics? What would you say attracted you to the medium in the first place?

Whit: I’ve been a comics reader and drawer since I was little, but didn’t start seriously making comics until my mid/late 20s. I started self-publishing, attending comics shows, and found a community in the indie comics world. In recent years, I’ve also become a freelance comics editor and contributing editor at The Nib.  I’ve always been attracted to the versatility of comics storytelling and enjoy both making my own comics and collaborating with others, such as Kaz. I like to make all sorts of comics: memoir, non-fiction (comics journalism/historical/educational), and some fiction.

K: I was attracted by the freedom of this medium! I loved working in animation, but it was so time consuming that I found myself becoming too deeply focused on producing marketable, profitable content rather than work that spoke to me. CCS (The Center for Cartoon Studies) really shook up my expectations and pointed me in the right direction. There has always been something deeply DIY about cartooning, and I consider that one of its greatest strengths. Also Batman.

Who would you say are some of your favorite artistic influences?

Whit: It’s hard to narrow it down because there are plenty, but off the top of my head, Lynda Barry and MariNaomi come to mind.

K: Jereme Sorese, Kevin Czap, Blue Delliquanti, Liz Suburbia, Marika and Jillian Tamaki and Joe Sacco are all giants. I would be blessed to be half the artist any of them are.

What advice would you give to other aspiring creators?

Whit: Make the work that’s in line with your values and interests.  Invest in your creative community. Realize that everyone has a different career path and that building it can take time. Don’t be ashamed to have a day job or other source of income…in this industry it’s not the exception, but the norm.

K: Don’t be afraid to ask for help. Collaboration is fertile. Find time to experiment. Try your best to learn from your peers. Be accountable to your community, and to yourself.

What’s a question you haven’t been asked yet, but wish you were asked?

Whit: What changes in the comics industry would you most like to see? Right now, my top answers would be more publishing opportunities for adult graphic novels (which I think is starting to happen, thankfully), more support for new parents in the industry (as a new mom, making art can be particularly challenging), and some sort of viable path towards a cartoonist/comics industry union.

K: What TV shows are consuming your free time right now and why?

Whit: I’m currently working on The Greater Good, a public health policy/history graphic novel which will be drawn by Joyce Rice and published by First Second in 2023. I have a public health degree, and having worked in health education before moving to comics, this is a dream project. I’m also drawing the fourth issue of my minicomic series Fizzle, published by Radiator Comics.

K: I’m working on a YA graphic novel for Iron Circus, and it will be the first large work I’ve ever written and drawn on my own! Scary. I’m also producing a comic about healthcare reform in collaboration with James Sturm for CCS- it’s done in the format of an animal-filled children’s picture book (even though it’s for kids and adults alike) and it was a fun departure from my regular style!

In regard to queer media, what LGBTQ+ media would you say you’ve been drawn to in the past, especially that in regards to your own specific experiences and identities?

K: It’s embarrassing since I feel like I’m too old for this, but Steven Universe has been really formative in what I think queer media (especially in the Young Adult side of things) is capable of. Kim Petras and Remy Boydell are always pushing boundaries. There’s this queerpunk band, Shh! Diam that always blows my mind. The poetry of Zefyr Lisowki and the comics by Bisakh Som are a huge inspiration. We’re sort of living in a queer creator golden age, although I wish everyone was paid more.

As someone who has lived within Malaysia, the UK, and the US, would you say you’ve experienced or seen certain variations in terms of queer culture and expression? If so, would you describe them?

K: I didn’t really get to grow up in Malaysia, but whenever I go back it’s amazing to see queer culture bloom in what can be a really hostile environment. It reminds me of the importance of queer survival, and how that’s tied up with solidarity and accountability. Kuala Lumpur’s scene is smaller and more intimate than New York’s (where I live now.). It’s not as if there’s no drama, but I feel like we have to watch out for each other. It reminds me that we don’t have the privilege to treat others as disposable.

As someone who has illustrated comics about sex positivity, immigration rights, etc., what would you say inspires your inspirations? Has activism through art always been something you’ve been drawn to (no pun intended)?

K: I am much less of an activist now, since I’m working for my green card. That makes breaking the law much more theoretical, and much less actual. I miss marching, but I feel like I am experiencing activism vicariously through my friends, family and community. Writing about it from the sidelines can be amazing, but also sort of frustrating at times. I call it Anarcho-FOMO.

Do you have any comics/books to recommend for the readers of Geeks OUT?

K: This One Summer is a brilliant read. Anything by Tillie Walden or Robyn Brooke Smith, they’re both geniuses. Sacred Heart by Liz Suburbia is one of my fave comics ever, it’s deeply haunting and very “punk”. Jeremy Sorese has a book coming out called ‘The Short While‘, it’s a queer sci-fi thriller, and while I haven’t read it yet, I’m sure it will be brilliant!