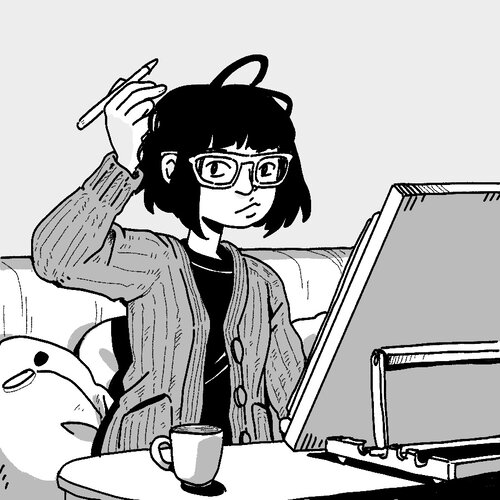 Wendy Xu is a bestselling, award-nominated Brooklyn-based illustrator and comics artist. She is the creator of the middle grade fantasy graphic novel TIDESONG (2021 from HarperCollins/Quilltree) and co-creator of MOONCAKES, a young adult fantasy graphic novel published in 2019 from Oni Press. Her work has been featured on Catapult, Barnes & Noble Sci-fi/Fantasy Blog, and Tor.com, among other places. She is currently working on two upcoming graphic novels from HarperCollins. You can find more art on her instagram or on twitter.

I had the opportunity to interview Wendy, which you can read below.

On a good day I have anywhere between twenty and thirty bees in my head, on a bad day there’s like forty to seventy. That is to say, I’m a comics artist who lives in Brooklyn with my partner and cat. I like to cook when I’m not drawing, but I like to eat marginally more than I like to cook.

How did you find yourself getting into comics? What drew you to this medium?

When I was a very small kid, some of my first books were collections of children’s comics. They were all in Chinese, which I couldn’t read, but I enjoyed deducing the story from the images, and I loved trying to draw like the illustrations I saw. When I got a little older, I started reading manga. I was really fortunate to have a great librarian at my town library in high school who loved comics and manga too, and because of her collection developmentI had an amazing stash of books to check out and read while I was there. I believe it was Lynda Barry (whose book, MAKING COMICS, I frequently refer to when planning drawing exercises for my own students– she has worked extensively with kids) who said that to a very young child, words and pictures go naturally together and only when they get older do these two categories become distinct and more rigid. As a child, that distinction was never really made for me, and I am thankful that comics have been with me my whole life.

As an artist, would you say there are any other artists or comics that have influenced your creative style or inspired you personally?

CLAMP, Rumiko Takahashi, Fuyumi Soryo, and Hayao Miyazaki are some of my earliest and biggest influences.

What are some of your favorite parts about creating a graphic novel?

Conceptually: worldbuilding. It’s fun to play in a universe and figure out the mechanics of it, as well as how the environment contributes to all of the aesthetic sensibilities that exist. Technically: inking, when all of the hard writing and art bits are over with and your only focus is to make it look polished and good.

Your first published graphic novel, Mooncakes, explores queer characters, magic and witchcraft. Where did the idea for this project come from and what was it like working on the comic with your co-creator, Suzanne Walker?

I’ve always wanted to do a love story between a witch and a werewolf– I think the earliest inspiration for that comes from reading Amelia Atwater-Rhodes in the library when I was in middle school, but also a smutty witch/werewolf romance that got passed to me in eighth grade as contraband. A ways out of college, I asked my friend Suzanne if she wanted to do this comic together with me, because she wrote fun fanfictions and I occasionally drew little accompanying art for them, and I thought she could do the part I didn’t like, which is piecing the story together, and I could do the fun (although in comics, way more labor intensive part). All of the creative visual executive decisions were left to me, although Suzanne gave input on things she had direct experience with, like Nova’s hearing aids.

What advice would you have for those who want to make comics?

Draw your own comic. I don’t care how crappy you are at art, you will never understand pacing or visual storytelling if you don’t sit down to draw. Use stick figures if you have to, but piece together a story panel by panel, visually, and you will learn what comics are about more than sitting down to write a script and then passing it off to someone else to draw.

“What brushes do you use”; the answer is: too many. I am a digital brush hoarder and I like to experiment with all of them. I feel like I am trying to find the elusive White Whale of Brushes, but that’s never going to happen. I can keep trying though.

I am currently working on my second solo graphic novel, THE INFINITY PARTICLE, a young adult book about a girl and robot who fall in love. It’s set on Mars in the distant future, and grapples with a lot of thoughts I have about technology and consciousness, and it is also a response to the invasive encroachment of Big Tech into all of our daily lives. My biggest fantasy that I put into this book is that in the distant future there is no Internet, no Web 3.0, and most of all, no tech billionaires or NFTs. I’m also playing around with ideas for a few more projects, including one inspired by the Neolithic in East Asia.

Estranged by Ethan Aldridge, O Human Star by Blue Delliquanti, Artie and the Wolf Moon by Olivia Stephens, Don’t Go Without Me by Rosemary Valero O’ Connell, On a Sunbeam by Tillie Walden, Girl Town by Casey Nowak, Witchy by Ariel Ries, Hotblood! by Toril Orlesky, and K. O’Neill’s upcoming Mothkeeper. I love Casey McQuiston’s wit. If we’re allowed to talk about short stories, Kimberly Wang’s new comic “Of Thunder and Lightning” on their gumroad is some fantastic visual storytelling. The short story “Attack Helicopter” by Isabel Fall was the most refreshing thing I’d read in sci-fi in a minute, if you can find it online.