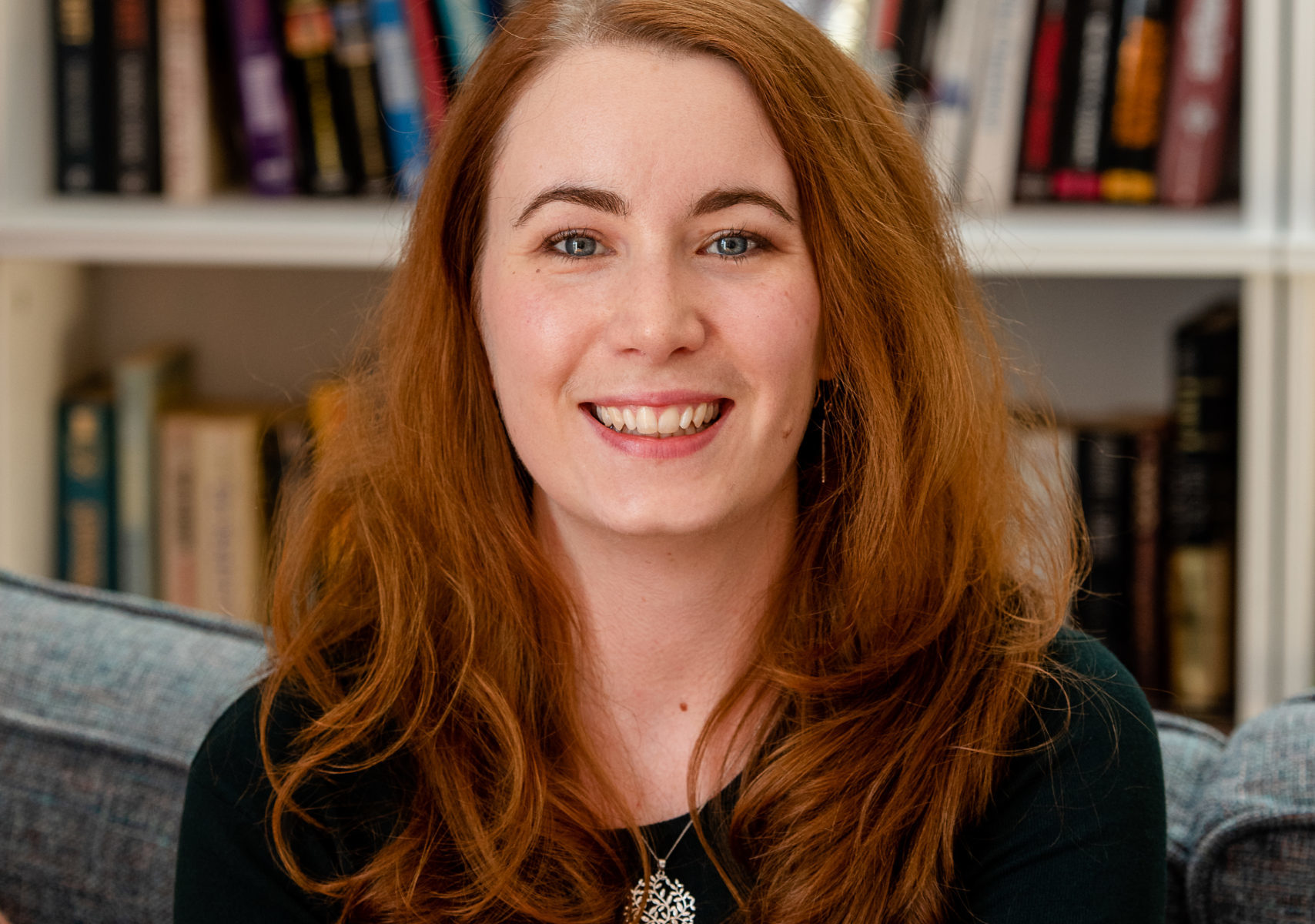 Freya Marske lives in Australia, where she is yet to be killed by any form of wildlife. She writes stories full of magic, blood, and as much kissing as she can get away with. Her short fiction has appeared in Analog Science Fiction, Andromeda Spaceways, and several anthologies. In 2020 she was awarded the Australian National SF (Ditmar) Award for Best New Talent. Her debut novel, the queer historical fantasy A MARVELLOUS LIGHT, is available now in hardcover.

First of all, welcome to Geeks OUT! Can you tell us a little about yourself?

Sure! I’m Freya Marske, a writer and podcaster based in Australia. I’ve moved through various flavours of geekdom in my life (shout out to my high school self, who was passionately into anime and also first in line for the opening screenings of the Lord of the Rings movies) but I’ve always been a reader of fantasy, so I’m delighted to have my debut fantasy novel published this year.

Where did you get your start in writing? How did you realize you wanted to be a storyteller?

I can’t recall a conscious choice being involved; I had a poem published in the newspaper at age 5, and never looked back! By which I mean I wrote on and off for years, including a lot of time in my twenties writing fanfiction and building my skills before I actually finished my first original novel.

Where did the idea for your latest book, A Marvellous Light come from?

The first seed of an idea that grew into the book was the question of who would liaise between a hidden magical society and an unmagical civil service, and what would happen if the wrong person ended up in that job. Because I always knew it would be a romance, too, I began to build the two protagonists—their backgrounds, their personalities, their relationship—at the same time as building the plot outwards from that initial idea.

What was the process like working on this story? Did you consult any resources while developing the background of your Edwardian magical fantasy?

I did quite a bit of reading about Edwardian society at the time, especially the daily life of the upper and upper middle classes and the kind of country manor house party that the book features. Plus I had to look into a lot of nitty-gritty details as they arose: the sort of cars that were popular, what the London Underground looked like in 1908, what a young man in mourning for his parents would have worn, etc. I enjoyed the process of learning about that time period and then weaving my own magical worldbuilding through it!

Regarding magical systems, oftentimes writers will build one based off familiar magic systems used in the past, i.e. magic schools, or fuse it with various other ideologies or systems, like Maggie Tokuda-Hall, author of The Mermaid, The Witch, and The Sea, fusing her magic system with marine ecology. Which makes me wonder how di you approach your worldbuilding?

Honestly, the magical system was the part I had the most fun with during the drafting process. I’ve always enjoyed those magic systems that don’t necessarily come easily to practitioners, and which have rules or constraints on what can and can’t be accomplished, but which also allow for creativity and wonder. The idea of using cat’s cradle string as a building block for gesture-based magic was my own, and I enjoyed teasing out the implications of it as I went through the book.

In a genre like historical fiction (much less historical fantasy), it can often be tough to describe queer identities without the queer language we have today. How did you work your way around that?

Absolutely—neither of my protagonists would describe themselves as gay, the word homosexual was I believe only just coming into English parlance, and they would feel uncomfortable with the word queer as it was used then. Despite having sexual experience with other men, neither think of themselves as part of a queer community, and a lot of their awareness of their own sexuality is around the necessity of it being secret. With all of that said: I wasn’t interested in telling a story about internalized homophobia or shame. Robin and Edwin take some time to recognize this aspect of one another, but once they do, the barriers to their love story unfolding are related to who they are as people, and the ways they’ve been hurt in the past. Not the fact that they’re both men.

What are some of your favorite parts of the writing process? What do you feel are some of the most difficult or frustrating?

I love the very beginning: when the outline is done and I’m leaping into a first draft, wrapping prose around my ideas and characters for the first time. And I find the final round of editing to be very satisfying, too. As an over-writer, I will always end up needing to trim unnecessary sentences and stray words, and I enjoy the process of making the end product as lean and punchy as possible.

There’s always a frustrating time for me around two-thirds of the way into a book. Now that I’ve written a few, I’ve learned to look out for those 66.6% doldrums! Somewhere around there I will become convinced that the book is terrible, I’m terrible, the entire thing is a waste of time, and nobody will ever enjoy it. It always passes. I just have to grit my teeth, trust the process, and write through it.

What can we expect from the main characters of A Marvellous Light?

I’ve been affectionately referring to Robin Blyth as a ‘sunshine himbo jock’, which tells you most of what you need to know. He’s good-hearted and straightforward and spent his university years on the cricket pitch or the river rather than studying hard, and he sincerely believes in punching his problems.

Edwin Courcey, the magician assigned as his liaison, is prickly and self-protective and vastly prefers books to people. With an analytical mind and a weak magical gift, Edwin has always been both interested in how magic works and frustrated by how little of it he can do.

In my spare time I can be found having strong opinions about wine, gin and whisky, lurking in art galleries, and figure skating. Everyone always seems keen to hear about that last one—it’s certainly an unusual sport to have chosen in Australia! But I did it as a kid and then picked it up again as an adult. I love how it calls for the slow improvement of individual skills, but also demands musicality and performance.

Don’t give up! You’ll write thousands upon thousands of words as you’re honing your craft, and you’re always going to be looking ahead at the people who you admire and want to emulate, and feeling frustrated with where you are in comparison. It’s human nature. And remember that any book you read has been meticulously revised and polished: first drafts are allowed to be, supposed to be, a bit of a mess! Let yourself have fun discovering your own stories.

And finally: write exactly the kind of book you most want to read yourself.

What’s a question you haven’t been asked yet but wish you were asked, as well as the answer to that question?

Hmm! Actually, I don’t think I’ve ever been asked which books I’ve reread the most times in my life. I’m a huge comfort rereader, and there are some books I return to again and again. Topping the list are: Diana Wynne Jones’s Howl’s Moving Castle, Helen Fielding’s Bridget Jones’s Diary, Megan Whalen Turner’s The King of Attolia, and Terry Pratchett’s Hogfather.

I’m about to get started on book 3 of the Last Binding series; I can’t say much about it yet, except to say that one of its protagonists appears briefly in A Marvellous Light. But I’ve also written a couple of contemporary romance novels which my agent has just taken on submission—it’s very exciting to be back at the beginning of the process in a new genre!

This year alone I’ve really enjoyed Summer Sons by Lee Mandelo (m/m Southern gothic horror with fast cars and revenants) and The Jasmine Throne by Tasha Suri (engrossing high fantasy with a central f/f pairing). In the romance sphere, married cowriters Mikaella Clements and Onjuli Datta brought out an amazing celebrity fake-dating story in The View Was Exhausting, and my favourite romance author KJ Charles finished up her Will Darling Adventures (a 1920s adventure series with stabbing, spies and m/m romance) with Subtle Blood.

However, to finish us off: one of my favourite books of all time—Regeneration, by Pat Barker—is a historical novel set just after the time period of A Marvellous Light. It’s about gay war poets, and trauma recovery, and no magic beyond that of kindness.