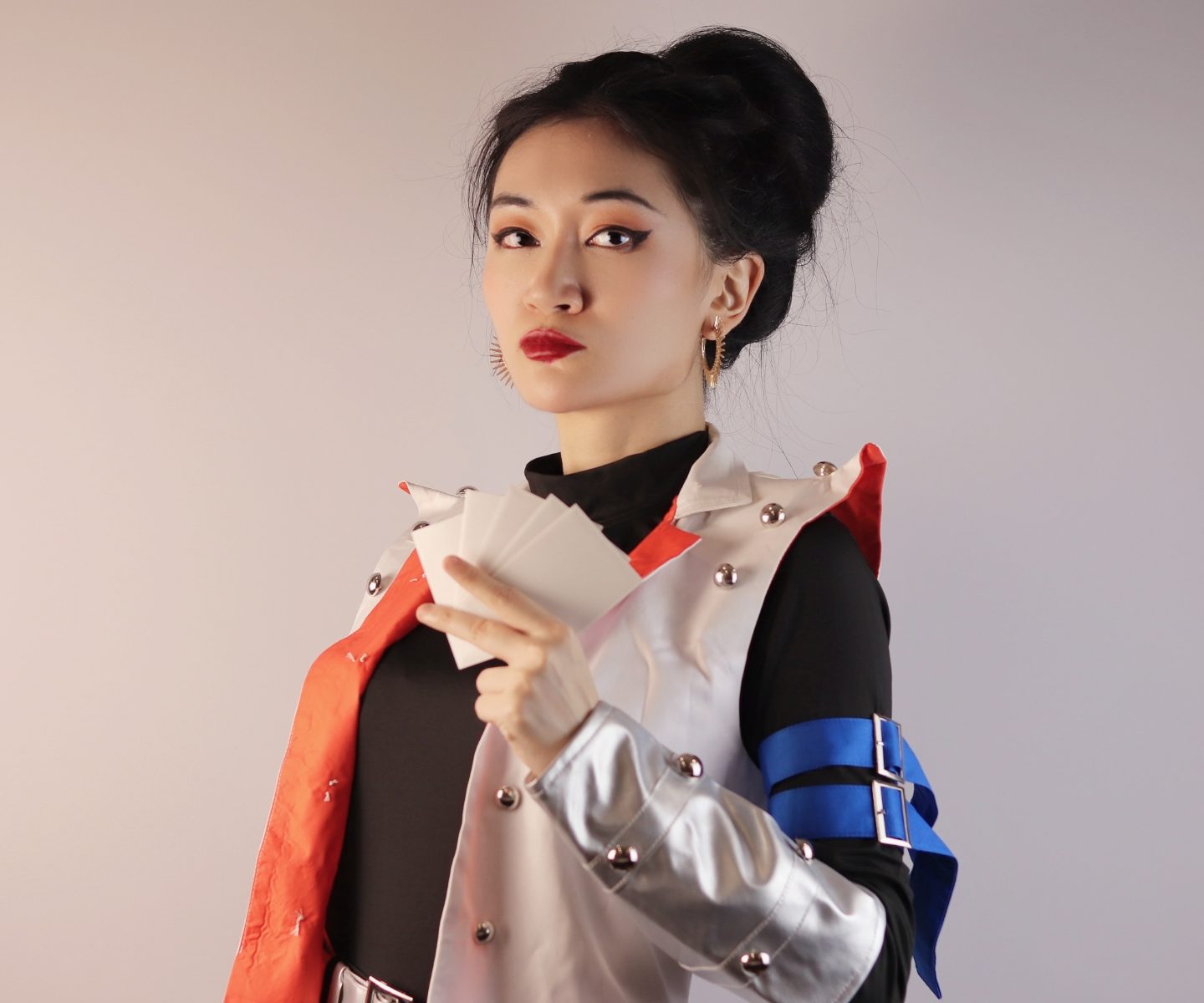 Xiran Jay Zhao (they/them) is the #1 New York Times bestselling author of the Iron Widow series. A first-gen Hui Chinese immigrant from small-town China to Vancouver, Canada, they were raised by the internet and made the inexplicable decision to leave their biochem degree in the dust to write books and make educational content instead. You can find them on Twitter for memes, Instagram for cosplays and fancy outfits, TikTok for fun short videos, and YouTube for long videos about Chinese history and culture. Zachary Ying and the Dragon Emperor is their first middle grade novel.

I had the opportunity to interview Xiran, which you can read below.

What can you tell us about your upcoming book, Zachary Ying and the Dragon Emperor? What inspired the story?

It’s a middle grade adventure I pitch as Chinese Percy Jackson meets Yugioh! It features a 12-year-old Chinese American boy who’s not really connected to his Chinese heritage, but is compelled to go on a journey across China to fight historical and mythical figures and heist real artifacts after the First Emperor of China possesses his AR gaming headset. I was inspired to write this story when my friend Rebecca Schaeffer, author of the Not Even Bones series, encouraged me to try my hand at writing MG, since I’d been hyper fixating on Chinese history and myth, and myth stories make for very good MG novels. Immediately I thought of doing a Chinese take on Yugioh, the most formative anime of my childhood, in which I would combine modern gaming tech with ancient myths and magic.

When did you know you were first interested in writing, and what drew you specifically to speculative fiction and writing for young adult and middle grade audiences?

I’ve always had stories in my head inspired by the media I love. 7-year-old me would babble imaginary scenarios to my friends at recess—which I now recognize as basically Yugioh fanfiction. So in a way, I really came full circle on that with this book! I write kidlit because I’m drawn to coming of age stories, having had quite a tough time finding my identity while growing up. Writing kidlit allows me to share what I’ve learnt along the way to future generations, and I hope it can help them in some way. Not to mention that I can be as wacky as I want!

From the looks of the synopsis description, it looks like this book will explore the themes of diaspora and Chinese identity. As a member of a different diaspora myself, I’m curious what working on these subjects has meant to you as an author, exploring it within Zachary’s character and your writing in general?

Zachary Ying—both the book and character—pull deeply from the inner turmoil I struggled with when I was around his age (12). That was when I first immigrated from China to a small town in Canada and landed in a school where I was the only Asian kid. My experience there plummeted my self-esteem, and it took me years to unpack the shame I was made to feel about my heritage and identity. I’m incredibly grateful that I now get to write the books I wish I had when I was younger. Through my stories, I hope I can help the next generation of diaspora come to terms with their identity, so they will have a smoother adolescence than mine.

How would you describe your writing process? What are some of your favorite/ most frustrating parts of the process?

I figure out the character arc I want my protagonist to have, the specific goal they’re trying to achieve in the story, then how the antagonist(s) competes with them for that goal. I used to have a problem with my plots meandering, but I solved it by constantly keeping in mind what my antagonist is doing and building a push and pull between my protagonist and antagonist. Then I whine nonstop to my friends about how impossible it’ll be to finish the book until I finish the book. I love worldbuilding and imagining the exciting scenes I want to put in a book, but putting the actual story to words is an absolute chore for me.

Were there any author, books, or media influences you feel have helped shaped you as a writer?

As mentioned before, Yugioh is the biggest direct inspiration for this book. I’ve always loved how Yugioh blends ancient magic with sci-fi technology—they don’t have to be kept in separate genres! I’m also inspired by a lot of Yugioh-adajcent shonen anime like Dragon Ball Z and Saint Seiya, plus superhero comics on the Western side. For some reason, I seem really drawn toward media that’s meant to target teenage boys. As for books, Lemony Snicket, Laini Taylor, Marie Lu, Rick Riordan, and Wu Cheng’en are some authors who’ve had big influences on me!

In addition to being a writer, you are also known for your YouTube videos discussing Chinese history and representation (and for your amazing costume!) May I ask how you got into both?

I got really into Chinese history a few years ago when I was in a pretty dark place in my life. Finding the stories of defiance and resilience in the historical records inspired me like nothing else. While there’s “typical Chinese culture” that seems to make everything about Confucianism and obedience and sticking within your designated social roles, there has also always been a counterculture that rebelled against that, and that spirit is just as Chinese. I think there’s much misunderstanding about Chinese culture from Western points of view, so I’ve made it my life’s mission to demystify it by spreading the stories I love. I didn’t have serious thoughts about becoming a YouTuber until I accidentally blew up with my first video though. I just wanted to rant about how terrible I found the 2020 live action Mulan movie, and Twitter wasn’t enough to express all my feelings, so I recorded a 35 minute video on a shoddy camera and made a YouTube account to throw it up there. Next thing I knew, the video had hundreds of thousands of views and my brand new account had more than 80 thousand subscribers from the single upload. I knew I couldn’t waste that platform, so I committed to making more videos. The costumes and clothing are stuff I’ve accumulated in my closet in my years of cosplaying. Turns out, the editing and makeup skills I’ve picked up from being active in fandom spaces translate really well to YouTubing.

As a queer writer, you are known for including some pretty cool queer characters within your work (including polyamory within Iron Widow, which is still pretty rare in YA!) Would you mind discussing what queer representation means to you (and whether we might see any in Zachary Ying and the Dragon Emperor?)

Oh yes, Zachary Ying is a queer book! Let’s just say his Chineseness isn’t the only identity Zack has to come to terms with. I will never write a book without queer rep because I’ve experienced what it’s like to crawl and scavenge for crumbs of representation when I was younger (and mainly by hanging onto characters the official creators will never admit to being queer), and that’s not something I want the next generation to go through. I want them to have a selection so large that they can find exactly what delights them.

Who are my inspirations when it comes to pop history outreach? The answer is famous Chinese historians like Yuan Tengfei, Meng Man, and Yi Zhongtian! Indeed, Chinese media has famous historians and archeologists who constantly appear on TV. A big show that broke them out was Lecture Hall (百家讲堂), which aired every day around noon and featured a professor giving a lecture on a certain topic, often history. I used to catch it every day during lunch break when I went to school in China (did you know Chinese schools and work give like 2-hour lunch breaks because you’re supposed to take a noon nap?). I never would’ve become so interested and knowledgeable in Chinese history without exposure to these amazing lecturers. My YouTube style is very inspired by them—I sit there and talk for a long time while giving my own opinions freely instead of doing short animated videos like most HistoryTubers. I’m grateful this works for me because I have neither the talent to do animations like that nor the restraint to talk about a topic for just 5-10 minutes.

Aside from being an author, what are some things you would want others to know about you?

I am honestly a huge mess of a person. My life is not glamorous as it may seem. It involves a lot of sleeping and waking up at improbable hours and stressing out over deadlines.

What advice would you give for aspiring authors?

When you’re on your first draft, stop constantly going back and editing. Power through the whole thing so you train yourself to actually finish books, THEN dive into the mess to edit. This way, you’ll avoid the trap of being one of those writers who starts a lot of stories but can’t finish them.

Linden A. Lewis’ THE FIRST SISTER is a mind blowing space opera, pitched as Red Rising meets The Handmaid’s Tale. It’s seriously SO GOOD and has amazing queer characters. Please read it! There’s a full review on my website if you wanna know more.

SHE WHO BECAME THE SUN by Shelley Parker-Chan, a genderbent retelling of the founding of the Ming dynasty, should appeal to those who enjoy the historical aspect of my books as well.

FRAGILE REMEDY by Maria Ingrande Mora, a YA sci-fi, gave me huge Yugioh 5D’s vibes, so I’d recommend it for fellow Yugioh fans.

CUTE MUTANTS by SJ Whitby is a delightfully chaotic and queer take on superheroes!