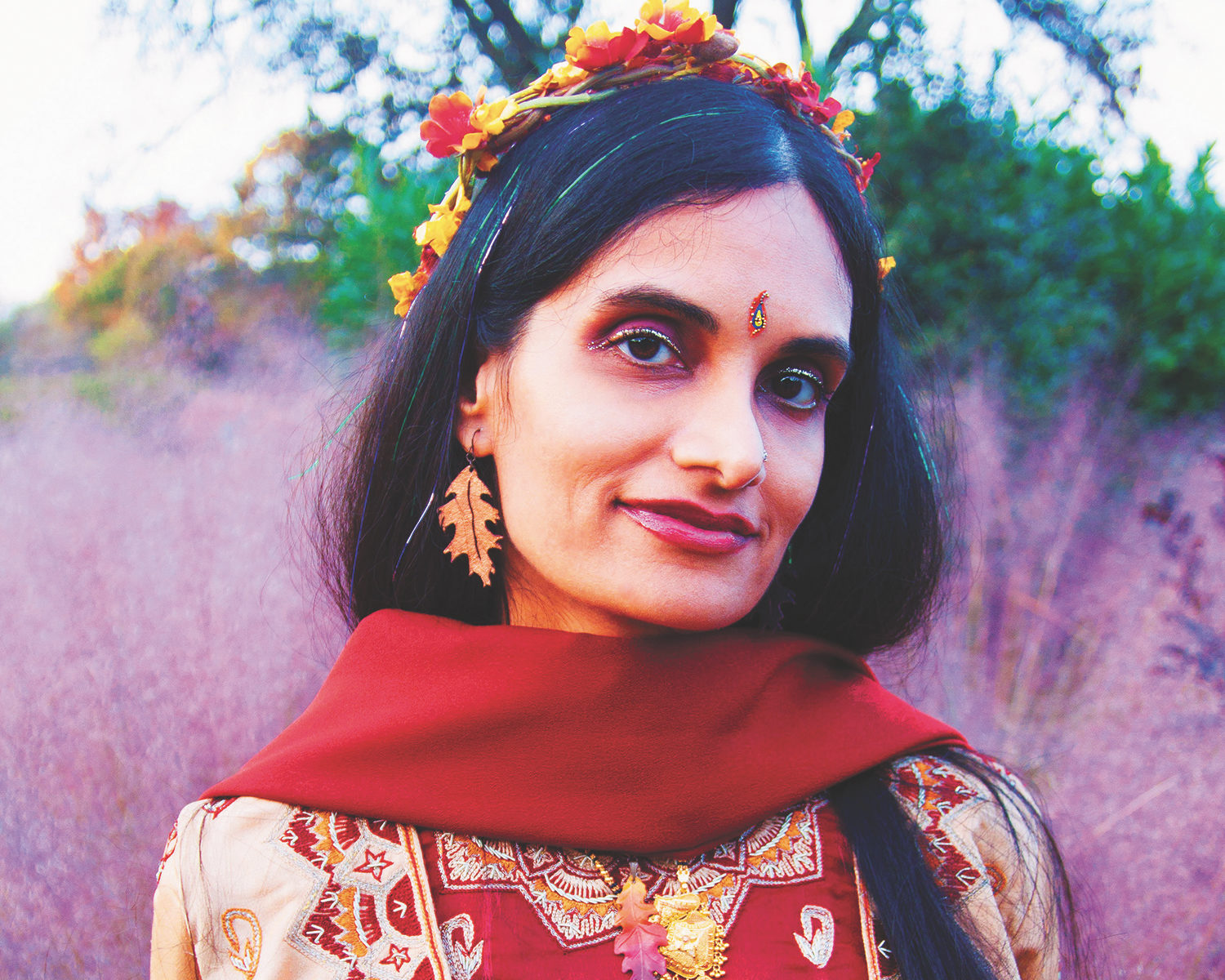 Shveta Thakrar was one of the inaugural Walter Dean Myers grant recipients of 2015 and has been a shining mainstay in fantasy, appearing on conference panels since 2010. She has had fiction published in Uncanny Magazine, Faerie Magazine, and forthcoming from anthologies TOIL & TROUBLE (HarlequinTeen, 2018) and A THOUSAND BEGINNINGS AND ENDINGS (Greenwillow, 2018). She is also the author of Star Daughter.

I had the opportunity to interview Shveta, which you can read below.

Thank you for having me! I am a very spiritual dreamer who believes in magic and kindness and has a violet felt witch’s hat I like to wear around the house sometimes just for fun.

Congratulations on your latest book, The Dream Runners! Could you tell us what’s about?

I really love the blurb my editor came up with, so I’m going to cheat and just paste that here.

“Seven years ago, Tanvi was spirited away to the subterranean realm of Nagalok, where she joined the ranks of the dream runners: human children freed of all memory and emotion, who collect mortal dreams for the entertainment of the serpentine, immortal naga court.

But when one of Tanvi’s dream harvests goes awry, she begins to remember her life on earth. Panicked and confused, she turns to the one mortal in Nagalok who might be able to help: Venkat, the dreamsmith responsible for collecting the dream runners’ wares and shaping them into the kingdom’s most tantalizing commodity. And as they search for answers, a terrifying truth begins to take shape—one that could turn the nagas’ realm of dreams into a land of waking nightmare.”

A number of things, starting with my fascination with the ancient lore of the war between the nagas (serpent shape-shifters) and their cousins and nemeses, the garudas (eagle shape-shifters). You can read more about that here: https://www.amnh.org/exhibitions/mythic-creatures/air/opposites-attack.

I love the idea of selling dreams, and originally I was thinking of a store where you could buy and sell dreams—as inspired by Laini Taylor’s wonderful Daughter of Smoke and Bone trilogy, in which wishes are sold in exchange for teeth—but once I combined that with another of my favorite folklore motifs, that of the changeling, and realized the story would be set partially against the landscape of the mythical war mentioned above, I had the foundation of this book. And it grew from there!

How did you find yourself drawn to the art of storytelling? What drew you to young adult fiction specifically?

I’ve told stories as long as I can remember, even if they were just adventures in rich worlds in my imagination, so it was natural for me to start writing them down. And once I realized I never saw myself in any of the books that I loved, especially minus the real-world problems of things like prejudice, I decided to do my part to help change that.

Young adult fiction is a place of firsts, and I really like thinking maybe I could bring hope to someone who needs it. But also, it’s a great place for adventure and exploration, both inner and outer, so there’s room for all kinds of stories.

This question made me laugh, only because I’ve never not been attracted to fantasy and magic! See above, re: adventures in my head.

My favorite examples from childhood: I’m not even sure where to start! Maybe Dorrie the Little Witch and collections of fairy tales and Amar Chitra Katha comics?

My favorite examples now (always an impossible question, so I’ll just grab a few at random): Holly Black’s Modern Faerie Tales trilogy; Laini Taylor’s Daughter of Smoke and Bone; When the Moon Was Ours, by Anna-Marie McLemore; A Green and Ancient Light, by Frederic S. Durbin; The Light at the Bottom of the World, by London Shah; Magical Women, an Indian anthology edited by Sukanya Venkatraghavan. (There are definitely many more than these five, all of which I’m sure I’ll start remembering the second I send this off.)

I’m definitely an intuitive writer, and I figure out things as I go, layering in various aspects through various drafts. That means some mistakes along the way, but I’m getting better about accepting that and even starting to view it as a challenge. And revision is where I shine.

My favorites: the fact that I’m spinning something out of nothing. Literally nothing. That’s magic! And that people I don’t know then get to read it and play in the worlds I’ve created and get to befriend the characters who sprang from my imagination and my heart.

My most challenging: it’s a toss-up between figuring out how to get the story right (sometimes it takes many drafts and lots of despairing) and accepting that sometimes what a reader is looking for doesn’t mesh with what you wrote. But as long as you’re happy with what you produced, that’s what counts.

I recently got back into video gaming after a twenty-year or so hiatus, and it’s been so fun, both revisiting games from my youth and trying ones out now. It’s a different type of storytelling, and I’m so excited to see what it inspires in my own work!

I’m also a big fan of cupcakes and kaju katli (definitely with the silver leaf on top, thanks).

If you had to choose between hands or wings, which would it be?

I’m leaning toward wings; I could fly, and falling would just not be a thing. I could figure out how to make up for hands, even if it would be challenging.

As of now, are you currently working on any other ideas or projects that you are at liberty to speak about?

I’m not sure when the announcements will be made, so I have to keep it vague for now, but I can say you’ll definitely be seeing more fantasy from me! It’s probably safe to say it’ll also be drawing on more Indian folklore and mythology, because of course.

I actually have two separate bits of advice to offer. The first is to figure out what kind of story you want to tell. Not what you think other people would want to read, but what the reader in you would want to see in the world. What would be fun for you to write? Follow that glimmer of a notion down the rabbit hole and see what results!

Secondly, I’ve been working with Becca Syme and the team of her Better-Faster Academy for writers, and it’s been so illuminating to understand what kind of a writer I am based on my CliftonStrengths and how to work best with that, rather than trying to follow advice meant for someone else. I’d strongly advise any writer to check out Becca’s work!

Let’s see; off the top of my head, aside from the authors I’ve already mentioned: