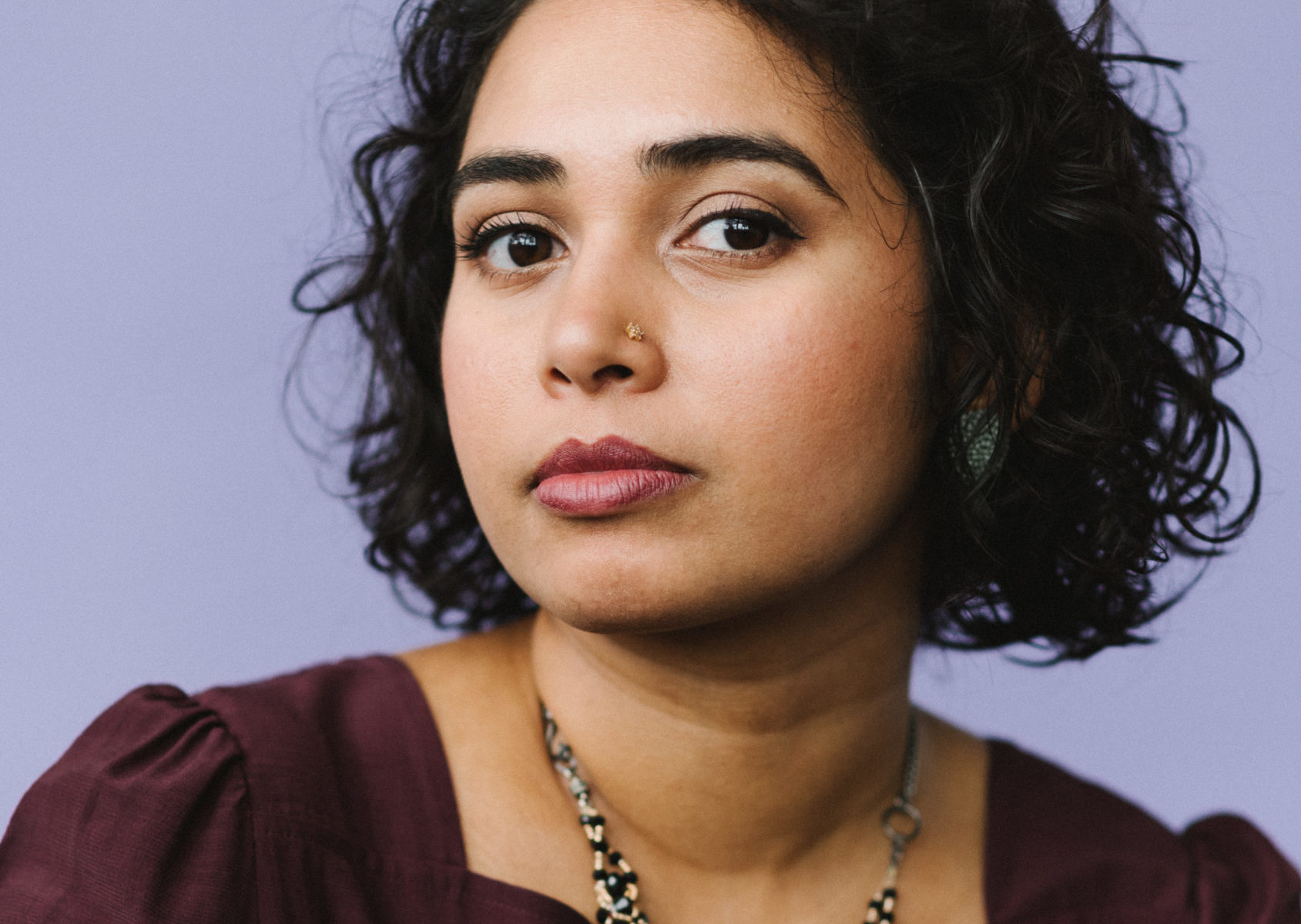 SJ Sindu is the author of the novel Marriage of a Thousand Lies, which won the Publishing Triangle Edmund White Debut Fiction Award, was a finalist for the Lambda Literary Award, and was an ALA Stonewall Honor Book; as well as the hybrid fiction and nonfiction chapbook I Once Met You But You Were Dead. Her latest novel, Blue-Skinned Gods, is available now. She holds an MA in English from the University of Nebraska-Lincoln and a PhD in English and Creative Writing from Florida State University. Sindu teaches at the University of Toronto Scarborough.

I had the opportunity to interview SJ, which you can read below.

First of all, welcome to Geeks OUT! Could you tell us a little about yourself and your latest book, Blue-Skinned Gods?

Blue-Skinned Gods is a novel about a young boy who has blue skin and who is believed to be the last human incarnation of the Hindu god Vishnu, born to lead us into the next epoch. He lives at an ashram run by his father in Tamil Nadu, India, leading prayer sessions and healing the villagers who live nearby. Soon, his fame starts to spread, and the ashram attracts wealthy foreigners and investors. The boy’s father dreams of a world tour, but when it finally happens, the boy—now a man—runs away to join the underground music scene in New York. Blue-Skinned Gods explores questions of religion, faith, identity, and the spiritual industrial complex.

When and how did you realize you were first interested in writing, and what drew you specifically to the mediums you write?

Like many geeks, I wrote fanfiction in high school. Mostly Harry Potter, but also a handful of other fandoms. I was deep into LiveJournal and a whole bunch of forums and such, too. That’s really how I got into writing. I wrote a bit of my original stuff here and there, but it wasn’t until I took my first creative writing class in university that I really dove into original fiction. Now I write in multiple mediums (poetry, creative nonfiction, novels, short stories, graphic novels, etc.) and I love the different opportunities and challenges presented by each one.

As someone who has not read your latest book, Blue-Skinned Gods (yet!), the title reminded me of the medical condition, Blue Baby Syndrome, which is correlated with vulnerability in an early stage of a child’s life. Is there any parallel to that within your story, between physical and emotional vulnerability?

I’m a drafter, meaning I like to write a lot of drafts for a single story. Especially with fiction, I think I do my best work when doing multiple drafts. My first drafts are often exploratory—I start with an idea or a premise and a few milestones I want to hit, but usually I’m not fully sure of what the story is yet. I write toward that story, and usually it clarifies by the second or third draft. That’s when I really start the bulk of the writing and revising. Blue-Skinned Gods went through twelve drafts before it even went to publishers, and twenty drafts total before it became the version you see on shelves.

What some of your favorite or most difficult parts of the writing parts?

The second draft is always difficult for me, because I’m just starting to figure out what the story is, but it also feels like I’ve been working on the project for a long time, and I get frustrated because the quality of the writing is nowhere near where I want it to be. It’s a long way from that draft to finished, and it’s easy for me to get overwhelmed thinking about all the work that still needs to be done. But I have to remind myself that I need to take it one page at a time, and I have to trust that I’ll figure it out.

This kind of intersectionality is really important to me to write about. I feel like the publishing world hasn’t always been kind to multiple marginalized experiences—they really like it when you’re only one kind of minority, because there’s a sales/marketing box for that. It’s hard to publish as a multiple-minority author, especially when you’re wanting to write about those lived experiences. There’s a fear—which is somewhat valid—that diaspora communities might not be welcoming to queer stories, and that mainstream queer culture might not be seeking out racialized stories. But in my experience—and I think publishing and Hollywood is starting to catch on to this fact—having multiple identities in one story actually doubles or triples your potential audience. So not only are these stories important, they also have the opportunity to cut across communities and reach farther than conservative corporate estimates.

Aside from being a writer, what are some things you would want others to know about you?

I’m also a professor of creative writing (I teach currently at the University of Toronto Scarborough). I brew beer. I’m into bespoke gift wrapping. I love geeking out about Sailor Moon, Avatar the Last Airbender, The Legend of Korra, BBC’s Merlin, and Warehouse 13.

No one has asked me any in depth questions about fanfiction, or how that has impacted my original writing. I think starting out writing mainly fanfiction as a teenager shaped my later writing in that it taught me the importance of creating memorable characters and worlds. The reason why we are drawn to write fanfic is usually because we find the worldbuilding compelling, and/or the characters compelling. Often it’s both. I try to apply that wisdom to my own writing. My own personal goalpost for “making it” is to write something that inspires someone to create fanfiction or fanart with my world and/or characters.

What advice would you have to give to other aspiring writers?

The three best things you can do for yourself are: learn to take criticism and rejection well; meet your deadlines; and be patient. Writing is a long, slow relationship with creativity, and the publishing industry is even slower. The stories you’re seeing on the shelves or screens took years to write and years to publish. There is no immediate reward in this career, except for your own satisfaction at making a good story. But at the same time, if you love writing, pursue it. You don’t want to regret the life not lived.

Are there other projects you are currently working on and at liberty to discuss?

Finally, what LGBTQ+ books/authors would you commend to the readers of Geeks OUT?

Oh there are so many! But my go-to authors are Gloria Anzaldúa, James Baldwin, Jeanette Winterson, Audre Lorde, Eli Claire, Shyam Selvadurai, and Alison Bechdel.