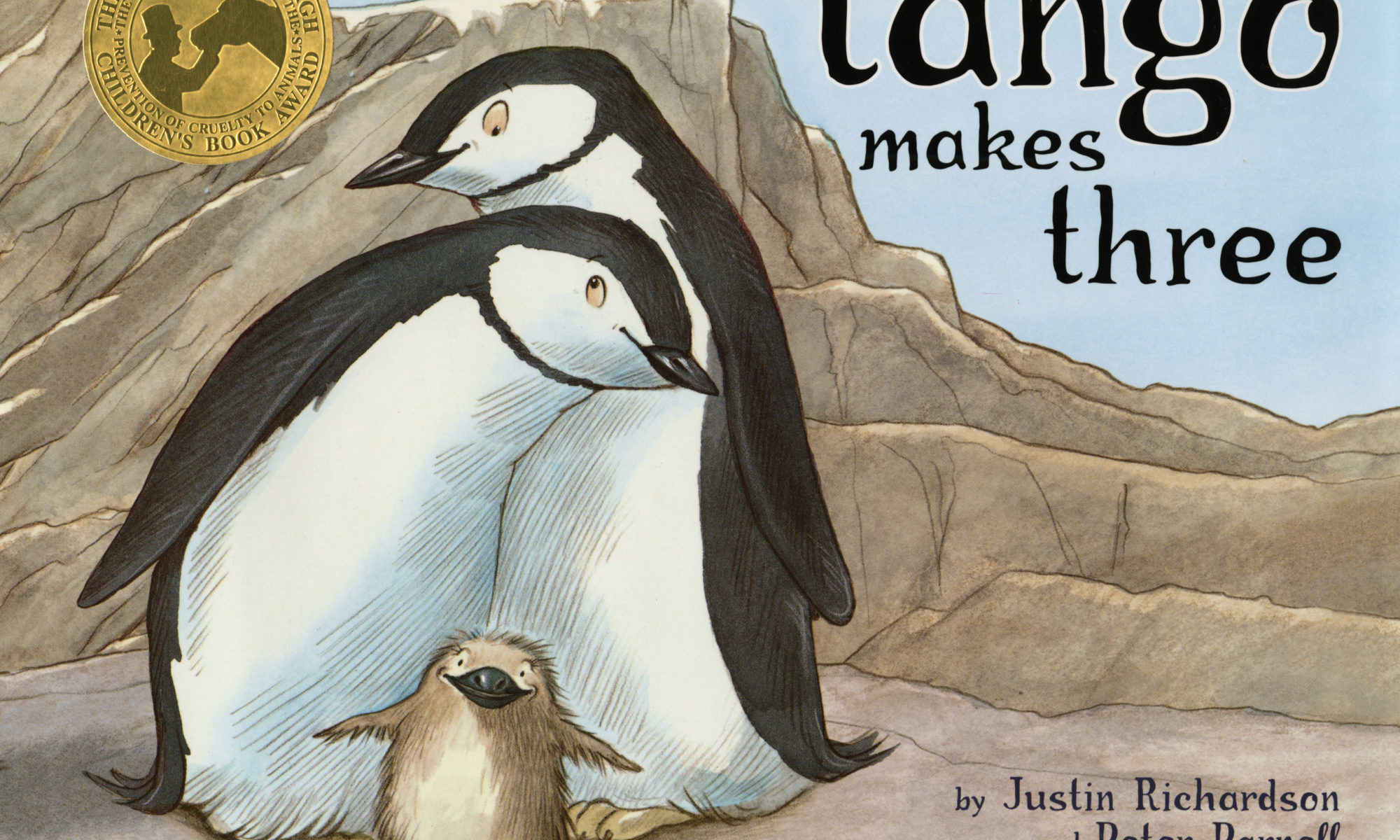 Florida’s new law, to take effect in July, prohibits classroom “discussion” and “instruction” about “sexual orientation” and “gender identity” in grades K-3, as well as any discussion or instruction about these topics that would be considered not age appropriate in the eyes of the State in grades 4-12. And Tango Makes Three, a multiple award-winning picture book by authors Justin Richardson and Peter Parnell tells the simple and true story of two male penguins in the Central Park Zoo who pair-bonded, built a nest, and with the help of a kind zoo-keeper, together hatched an egg.

The book is written for children ages 4 to 8, but the new Florida law will prevent their teachers from sharing or discussing it with them. Teachers use And Tango Makes Three and books like it to help children with same-sex parents feel welcome in their school and to help their classmates understand the different family structure of their classmates. Lessons like these are invaluable to children of same-sex parents. Censorship of facts about gay families and lives, like that required by the new law, threatens the mental health of children with same-sex parents as well as that of LGBTQIA+ children themselves.

I had the opportunity to interview Justin Richardson and Peter Parnell, which you can read below.

First of all, welcome to Geeks OUT! Could you tell us a little about yourselves?

Hey there! Thanks for having us! We are a playwright (Peter) and a psychiatrist (Justin), married and living with our daughter and dog in Greenwich Village.

The two of you are well-known for your collaboration on And Tango Makes Three, one of the first traditionally published children’s books to discuss LGBTQ+ themes and same-sex parents inspired by real life story of Roy and Silo, two penguins from New York’s Central Park Zoo? How did the two of you come together to work on this project, and what was the creative collaboration process like?

One Saturday morning back in 2004, we were sitting at the kitchen table reading The New York Times. Justin read aloud an article called “The Love That Dare Not Squeak Its Name”, about these two male penguins at the Central Park Zoo who pair bonded and tried to hatch a rock. There was something about hearing the story read aloud that made us think, this sounds like a children’s book. Justin – who is always more the optimist –said, “Let’s write it today!” We both sat down and wrote our versions of the story. Just to get it out of our system, we wrote one version that was more tongue-in-cheek: Roy and Silo were like two very small gay men in tuxedos (“Roy loved Sondheim. Silo enjoyed Jerry Herman.”) We chuckled and set it aside, resolving to write a version with as little anthropomorphizing as possible, sharpening it, simplifying it, pacing it, and pairing it down. We sent the first draft to our book agent fairly soon after, to see if there was any interest in an editor working with us. David Gale at Simon & Schuster was the perfect person to work on it with.

And what made you specifically pick this story?

Justin saw the potential in the story as being a way for parents to talk to their kids about families with two moms, two dads, parents using reproductive technology, and adoptive parents. We knew that to really reach these kids, they would need a story that spoke to them and their interests, in their own language and without didactics. Justin knew of the need for this sort of book from his speaking about sexual orientation development to parents at schools across the country (he had co-authored a book with Mark Schuster MD on sexuality and parenting entitled Everything You Never Wanted Your Kids to Know About Sex (But Were Afraid They’d Ask)). And, closer to home, we were in the process of trying to have our own child. So, the story chose us, in a way.

Since your book was published in 2005, it has been continually censored in countries around the world for “inappropriate” material, i.e. discussing LGBTQ+ families. How do you feel that in 2022 your book is still being challenged by the likes of  mandates, like Florida’s “Don’t Say Gay” Bill (sigh)?

The old challenges suddenly seem almost quaint. In the early years after the book was published, as challenges to the book began, mostly  by parents whose kids had brought the book home from a school or public library, the cases would be referred to school boards whose lawyers advised them that the book could not be removed from the library, since this violated the Second Amendment of the Constitution. Today’s legislative efforts, for as long as they are allowed to stand, have skirted that process entirely. They are cynical attempts to stoke and play on the fears of some parents for the lawmakers’ political gain. And they may be quite effective at intimidating teachers so they avoid discussions of books like ours. That is, unless those of us who support LGBTQ+ families and children can find effective ways to stand up for the kids who need these books and their teachers.

If you could say anything directly to the legislators and educators hoping to ban your book, what would it be?

Please read our book. Just sit quietly and read it. Then meet a child with two moms or two dads and read it to them. And allow yourself to reconsider the effect on this child of eliminating our book from their classroom.

What are your thoughts on the presence of LGBTQ+ representation in all-ages media and literature?

It’s much better than 17 years ago when Tango came out. We’re especially heartened by the emergence of children’s and YA literature which includes LGBTQ characters even when their stories are not the focus of the work. Of course, in the decades since the premiere of “Will and Grace,” television has brought LGBTQ+ stories into homes across the country through the work of LGBTQ+ writers, producers, actors and allies. This sort of representation has led to a kind of openness and acceptance never seen before. And that, in turn, has been met with the backlash we are now seeing.

What’s it like inside the penguin enclosure at the Central Park Zoo?

Loud and smelly, but thrilling.

What advice might you have to give for aspiring creatives, especially those who want to make their own picture books one day?

Find people who understand your work, and share with them, early and often. Ask for advice from many, accept it from some.

Peter, whose most recent play, “Dada Woof Papa Hot” (our daughter’s first four words), was produced at Lincoln Center Theater, has two plays in development now, one of which deals directly with sexuality, censorship, and art.

For more from Justin and Peter, here is a link to a recent op-ed they wrote for the Washington Post.