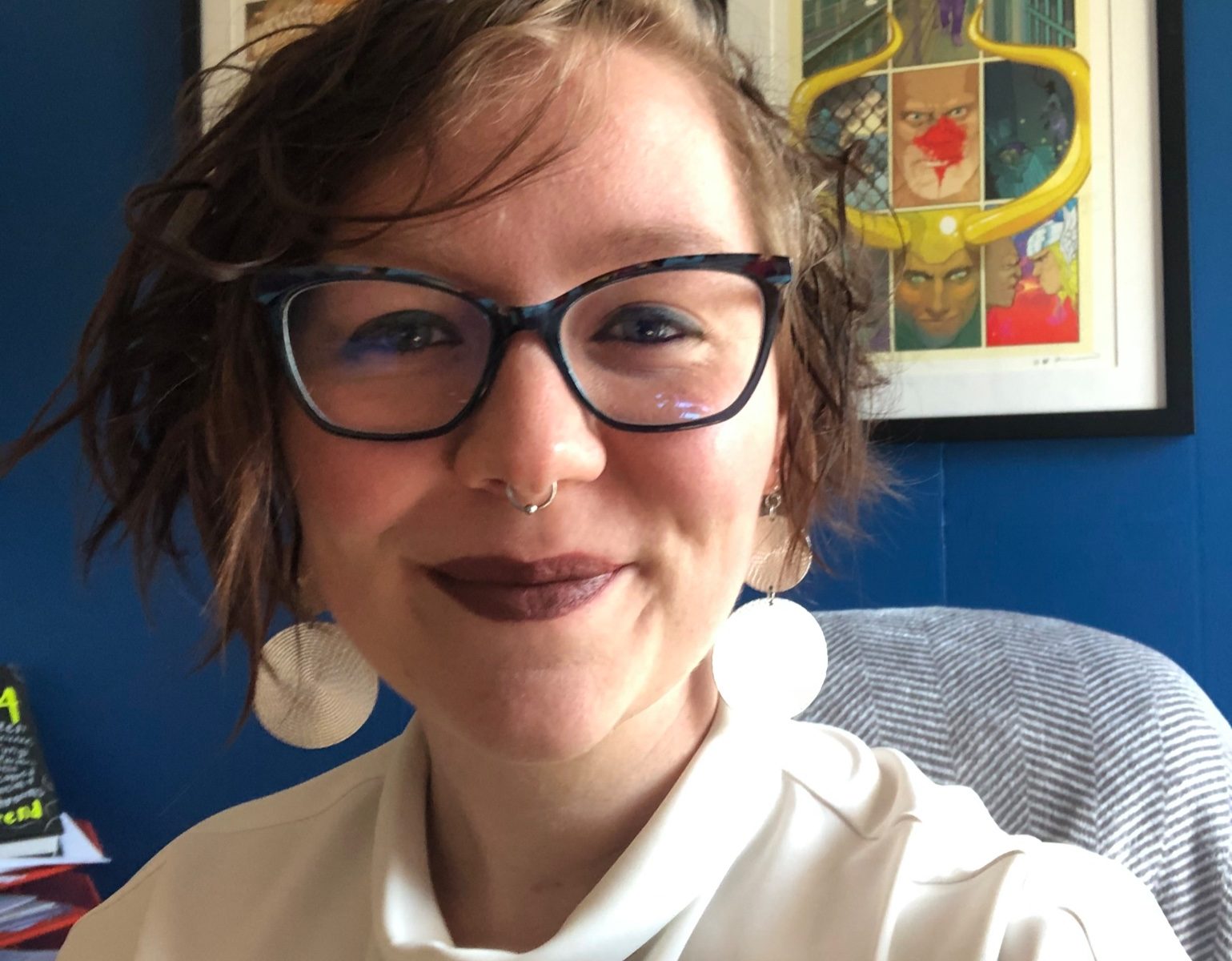 Greetings and Happy Pride all! For this installment of the Geeks OUT! Queer Creator spotlight, I had the opportunity to speak with Marvel Editor, Sarah Brunstad. Sarah has worked on a plethora of titles for Marvel including, Aliens, X-Men, Captain Marvel, Black Widow and a number of the Marvel Pride Anthologies.

I spoke with Sarah about this year’s much anticipated, Marvel Voices: Pride issue, queer representation in mainstream comics and the awesomeness of working with all queer creators on Marvel’s queer characters.

Sarah Brunstad: Marvel’s Voices came out of the podcast created and run by Angélique Roché, with the intention of uplifting and highlighting marginalized creators and creators. Angélique worked with former Marvel editor Chris Robinson to build the very first anthology, and the rest is history!

CA: I know you work on many books at Marvel (X-Men, Aliens,Marvel Voices, etc.) How did you come to be the editor on the various Marvel’s Voices books?

SB: I was an associate editor at the time, working very closely with senior editor Wil Moss. When the first anthology was so successful, Marvel decided to do more, and Wil and I had a strong interest in bringing in new, diverse talent. And we’re both crazy people who kind of love building complicated anthologies. So we got the opportunity to do Marvel’s Voices: Legacy, and then I pitched an Indigenous Voices issue that was really near to my own heart. After that, I got to continue editing the line as someone who’s just very passionate about what Voices is trying to do.

CA: Can you give us a little bit of a run down on the characters and creators for this year’s installment?

SB: We have 7 awesome stories this year, and we introduce a ton of new characters. Charlie Jane Anders with artists Ro Stein and Ted Brandt introduced Escapade, a new trans mutant who will go on to star in an upcoming arc of New Mutants. Grace Freud and Scott B. Henderson created a whole gang of new young mutants, a tight group with hilarious rapport. Andrew Wheeler and Brittney Williams—one of my personal favorite artists—did a great Hercules and Noh-Varr story. Chris Cantwell and Kei Zama leaned into some beautiful punk queer history with a wild Moondragon/Guardians of the Galaxy story. Alyssa Wong and Stephen Byrne made an absolutely perfect pairing for the return of the much-beloved Young Avengers. Ira Madison III and Lorenzo Susi brought Pride to Asgard in a super cute Runa the Valkyrie story. And Danny Lore and Lucas Werneck got to do something really special—revisiting Venomm and Taku from Don McGregor’s Jungle Action run and establishing their relationship as a couple on the page for the first time, as Don had always hoped and intended.

CA: What were you looking for in terms of pitches/stories for this book? Was there a set of characters Marvel wanted to spotlight or did that just come as part and parcel with what the creators wanted to do?

SB: I definitely went in with the intention of bringing more trans rep to the Marvel Universe, and was beyond thrilled when Charlie Jane agreed to it—it’s something I’ve wanted to do with her in particular for a long time. For Danny and Lucas’ story, that was something Angélique and I had talked about lot, this idea of bringing a previously coded character out of the closet, so to speak. Venomm and Taku were a perfect fit. And I knew I wanted a Young Avengers story in here, because we got a chance to spotlight Hulkling and Wiccan in big ways last year but the team itself hadn’t been together for a long time, and as the most queer-heavy team in Marvel history, I really wanted to reunite them. I was so excited Alyssa was in for that. But for the rest, I left things really open and just tried to have fun and spread joy.

CA: Obviously, it’s a really good thing to give queer creators the opportunity to tell more authentic and genuine stories through the queer characters inhabiting the Marvel Universe. What other aspirations does Marvel have for putting the book out annually?

SB: Well, we’re playing a slow game. Every year that we create new queer characters, our world gets bigger and more diverse, and eventually those characters will be as beloved as, say, Rogue and Gambit. And we are celebrating the sheer diversity of talent in comics in an explicit way for the first time. I’m extremely proud that so many of the people who got their start in a Voices comic have gone on to do more work for Marvel—Rebecca Roanhorse, David Cutler, Chris Allen, Maria Wolf, Eleonora Carlini (through the semi-related Women of Marvel anthologies)—I could keep going, seriously, we have made such a huge impact in just a couple of years. Our talent pool looks way different now. That’s the major outcome for me, personally.

CA: You’ve stated elsewhere that you didn’t read comics as a kid, so now that you’ve read, worked on and created quite a fantastic resume in comics, what is it about the medium that you love and why is it such a seemingly important art form in the LGBTQI+community?

SB: I love comics because they’re WEIRD. They’ve existed on the fridges of the publishing and artistic community for a long time. It’s only been 14 years since that first Marvel Studios Iron Man film, and it’s hard to remember now that before that, basically no one knew who Iron Man was. So there’s traditionally been a ton of freedom to do strange, creatively fulfilling things in comics that you couldn’t do anywhere else. We like to say that we have an unlimited budget in comics—you can crash cars, wreck whole planets, in a single page. That’s wild and so exciting. And even though it’s hard, I love the fast pace too, and the feeling that a creative team is a really tight-knit group, always in conversation, always holding each other’s hands. Making a comic is truly a labor of love. I think queer people have always made comics in our own little corners, but I’m really happy to see us taking the mainstream now too.

SB: Well, we still need more characters and creators on the mainstream, big budget books. In some ways that work has just begun. But also, I’m very inspired by this younger generation of writers and artists coming up who don’t feel any need to hide themselves, who can put their pronouns in their bio and make queer themes a major part of their work without that nasty voice in the back of their head going “but is this marketable.” I’m not saying that doesn’t ever happen anymore, but there’s just a tremendous amount of freedom out there, and I think more people making comics than ever before.

CA: Won’t ask you to play favorites here, but what is something you’re excited for the fans to see coming out of this year’s Marvel’s Voices: Pride issue?

SB: Heh. I mean, yes, ALL of it! But I guess I have to say Escapade’s introduction is a big thrill—I am so thrilled for what we’re going to do with her in New Mutants. Which, by the way, I’m pretty sure this current run now represents the longest ever run on a Marvel series by trans creators (possibly also beating DC!). Vita Ayala has been writing it since issue #14, issue #29 is guest-written by Danny Lore, and #31-33 will be guest-written by Charlie Jane until Vita returns with #30. It’s a big deal, and we’re all very proud.

CA: Can you give us maybe a favorite sequence from one of the stories this year?

SB: Oof! So many! But okay—there’s a splash page in Chris Cantwell and Kei Zama’s story that I LOVE. It’s grimy and intense and so so good. You’ll know it when you see it. Kei and I had a lot of fun brainstorming the Easter Eggs embedded on that page.

CA: As an editor, what is some helpful advice you can offer to aspiring editors, writers and artists that hope to make a career in comics?

SB: Make friends with other people who are coming up. That could be through social media, whatever, or the more traditional way of going to conventions. Ask lots of questions when you get to talk to pros. Read everything. Draw/write every day. Artists—please, please have a professional portfolio that goes beyond your Instagram. And don’t be precious about your work, especially writers! Comics is a collaborative medium, and a considerable part of your job is just being good to your fellow creators. Breaking into comics is pretty hard, but that’s true of any creative industry, and I truly believe that those who put in the sweat eventually get the payoff. (Except, you know, the payoff is a small check and an immense feeling of self-satisfaction—nobody’s here to get rich, haha).

CA: Thanks so much, Sarah. Looking forward to this year’s addition as well as the next entry into the Marvel’s Voices initiative! Here is a rundown of the creators and stories in this years Marvel’s Voices: Pride Edition

New York, NY— May 12, 2022 — On June 22, Marvel Comics will celebrate Pride Month with a new giant-sized one-shot spotlighting LGBTQIA+ creators and characters! A queer-centered anthology brought together by an amazing lineup of writers and artists from all walks of life, MARVEL’S VOICES: PRIDE #1 will feature eight extraordinary adventures, an introduction by Vice President of Television at Bad Robot Productions Alex Phillips, and more!

From uplifting to thrilling, this diverse collection of stories take place all throughout the Marvel Universe and celebrate the themes and joy of Pride Month. And today, fans can get a first look at each one!

·       In last year’s MARVEL’S VOICES: PRIDE, Steve Orlando and Luciano Vecchio introduced the dreamy mutant hero SOMNUS,  who now stars in the ongoing X-Men series MARAUDERS! New York Times-bestselling author Charlie Jane Anders and artist duo and Eisner-nominated cartoonists Ro Stein and Ted Brandt continues this tradition with the debut of ESCAPADE! Readers will meet this all-new trans mutant super hero in a 20-page adventure that will introduce her career as a super thief and set the stage for her exciting future.

·       Rev up your engines for a heart-bending story across space and time in a Moondragon story by IRON MAN scribe and lauded TV showrunner Christopher Cantwell and artist Kei Zama.

·       Nebula, World Fantasy, and Locus-award winner Alyssa Wong and fan-favorite artist Stephen Byrne reunite the Young Avengers in a story guaranteed to please fans new and old! Byrne will also depict the team in one of the issue’s variant covers!

·       Comedy writer Grace Freud (Rick and Morty, the Eric Andre Show) brings her talents to Marvel with a story about the power of responsibility featuring the Marvel Universe’s favorite gay ginger, D-Man! She’s joined by Eisner-nominated artist Scott B. Henderson in his first work for Marvel!

·       And writer Danny Lore and artist Lucas Werneck revisit the legacy of Taku and Venom, two Black Panther characters long left in the closet, in a tale of love and redemption!

Check out all five stunning MARVEL’S VOICES: PRIDE #1 covers and interior artwork from each story now and celebrate Pride with Marvel Comics on June 22! For more information including a word from this year’s creators, visit Marvel.com.

Story A  – Escapade in “Permanent Sleepover”

Story B – Valkyrie(Rúna) in “Over the Rainbow”

Art by SCOTT B. HENDERSON