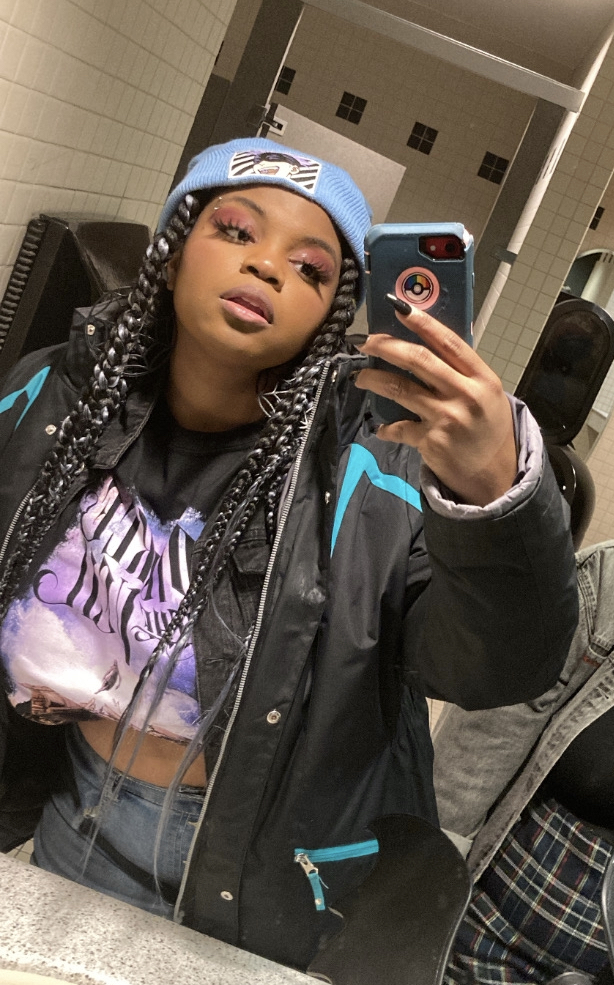 The Asexual Goddess is a YouTuber who makes content centered around Aromantic, Asexual and Agender topics as well as a wide range of other LGBTQIA+ topics.

I had the opportunity for an interview with The Asexual Goddess, which you can read below.

My name is Kimberly Butler (she/they) also known as the Asexual Goddess on YouTube and Twitter. I create content and try to advocate for my identity as well as other Aromatic and Asexual identities. I especially speak on racial issues within the LGBTQIA+ community and I am currently working on a new channel called Bisexual Files where I unpack my own internal Biphobia in hopes that it can help others understand Internal Biphobia on a deeper level. I am 21, I live in Chicago and I love Anime and Comics and Damian Wayne is obviously the best Robin.

As a person on the aromantic-asexual spectrum, how did you find yourself discovering this part of your identity?

I found myself discovering this part of myself online like most Aces do. I remember seeing videos from Amelia Ace at the time and reading information on different identities (Like I still do for fun now) and thinking that the AroAce labels fit me to a T.

I also had to sit with myself and ask myself how I truly felt about a lot of things, how I reacted to certain things (being nonchalant with breakups, feeling like I was playing a ROLE in most relationships, etc) that led me to discover my identity.

How did you find yourself getting into asexual advocacy? Did anything or anyone in particular inspire you?

I found myself getting into Ace activism because I saw a lack of ace representation on sites like YouTube at the time. We didn’t have the greats like Yasmin Benoit with her pushing fashion boundaries for Aces and Women, Marshall with his activism and love of sweets, or Ace Dad and his sensational informational Tik Toks.

Besides your work online, what do you like to do in your free time?

I love to draw and read comic books. You can probably find me in one of Chicago’s many comic book stores. I also love to read fictional YA books when I get the chance, play horror or superhero video games occasionally.

What are some things about asexuality you would want people to take away from this interview?

That Asexuality is wide and vast. Asexuals can be on either ends of the spectrum or right smack in the middle. I want to bring light to that so anyone outside of the Asexual  Spectrum will choose their words more carefully when they come across Aces who “don’t act Asexual” or what they think Asexuals are supposed to act like from what society has imposed on us. I am a very touchy feely person and people always assume it means I’m being sexual and that’s not true all the time but certain factors (being black and presenting myself as feminine sometimes) causes people to think everything I do implies I’m automatically attracted to someone (And that even confuses ME!)

I would say it’s pretty odd because we have this ability to be on both ends of the spectrum and for people who can relate to me it feels like when you act on your alloromanticism or allosexuality you either aren’t Ace enough. I am currently dating someone, and I think the first thing I thought was ‘oh my gosh, does this mean I’m not Ace/Aro? But we as a community just need to speak about the different identities that include alloromanticism without being toxic when a person’s Aro/Ace identity doesn’t look how you think it should.

For someone new to the ace community, what resources would you recommend checking out?

TAAP does an amazing job with being diverse and getting as many Aro/Ace voices out there and it’s very enlightening to see. Asexual Outreach also is a great organization to check out for Aro/Ace support.

What are some ways you would recommend for someone hoping to celebrate or advocate for their own aceness?

To celebrate: I would say look at more media with celebrated Aro Ace characters, Hazbin Hotel’s Alastor (Vivenne Medrano aka Vivziepop)  is a fan favorite among the Hazbin Fandom which is a nice surprise seeing people are so convinced AroAce characters can’t hold a candle to Allo characters. Going off that seeing characters that are Demisexual like Quinn, and Asexual like Griff from Ashley Nichols upcoming show FarFetched really will amp you up seeing Quinn and Griff are main characters in the show.

To advocate: I would say spread the word on different Ace identities, help people understand that Ace/Aro people are LGBTQIA+ and deserve a spot at the table. Find local groups you can engage with. Find books from people of different backgrounds in the Ace community and listen to the differences between each Ace/Aro experience.

Who are some ace/queer activists you would recommend others to know about?

I would recommend them to check out Marshall Blount AKA GentleAceGiant, Yasmin Benoit is doing amazing things for the community, Sherronda  J Brown (gender negative on Twitter). Ace Dad has some great Tik Toks about Aro/Ace content, Queer as Cat has some great Youtube Videos you all should check out. I LOVE the Ace Couple for their advocacy they’re amazing on spreading the word and helping be vocal about topics of racism, sexism, and disabilities. Ashante the Artist has spoken a few times on Asexuality but her content is also great for unpacking daily life with various topics.

What LGBTQIA+ media (i.e. books/ television/etc.) would you recommend to the readers of Geeks OUT?

I would say look into Youtubers like the ones I listed throughout this article. There are some amazing books by Claire Kann about Aro/Ace LGBTQIA+ black women. Watch The Owl House by Dana Terrace (There’s a canon Aro possibly Ace character and the main lead is a Bisexual girl with a Lesbian girlfriend on Disney? I know!). Check out Jaiden Animations new video about their AroAce identity (and their other videos). We also have amazing Ace comic artists Aro and Aces, Aro Comics (aro_comics on Instagram).