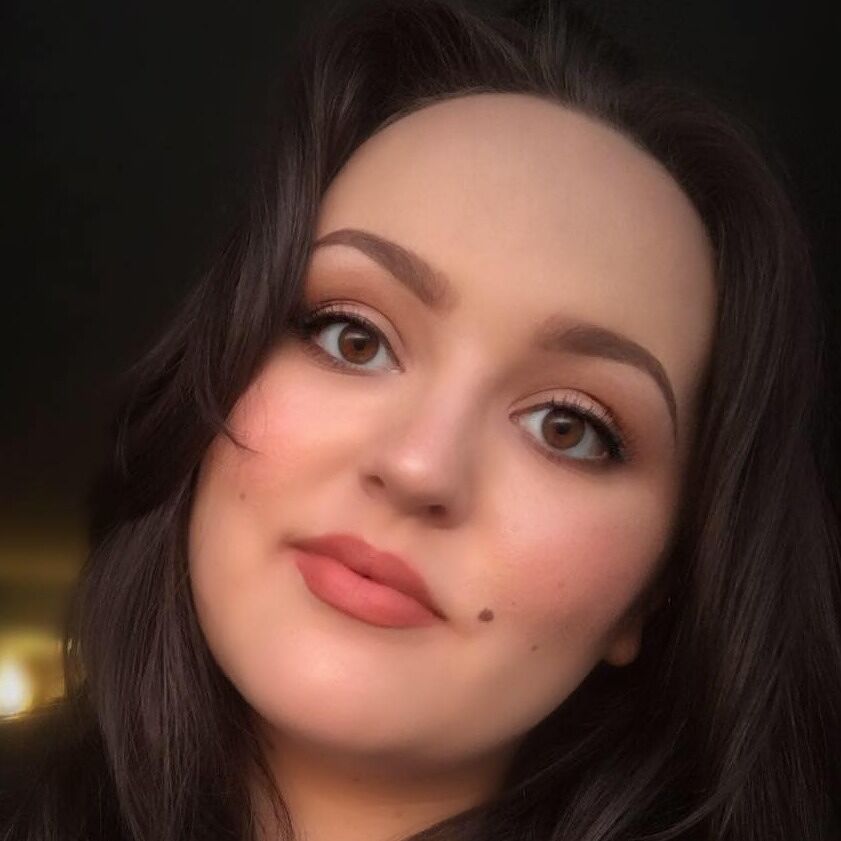 Melissa Blair (she/her/kwe) is an Anishinaabe-kwe of mixed ancestry living in Turtle Island. She splits her time between Treaty 9 in Northern Ontario and the unceded territory of the Algonquin Anishinabeg in Ottawa, Canada. She has a graduate degree in Applied Linguistics and Discourse Studies, loves movies, and hates spoons. Melissa has a BookTok account where she discusses her favorite kinds of books including Indigenous and queer fiction, feminist literature, and non-fiction. A Broken Blade is her first novel.

I had the opportunity to interview Melissa, which you can read below.

Sure – I’m Melissa Blair. I’m 27 Anishinaabekwe, I spend too much money on books and too much time playing board games. I love all forms of storytelling and have a new puppy named Giizhik.

How did you get into writing, and what drew you to writing speculative fiction specifically?

I was seven when my mom explained to me that it was someone’s job to write all the books I’d been reading, from that moment on I knew I wanted to tell stories. It started with paper and crayons and has gotten slightly more sophisticated from there. I think speculative fiction has always been something I’m drawn to because its function is to allow another perspective or idea take center focus, as an Indigenous person I’m always comparing Western perspectives with Indigenous ones.

What can you tell us about your new book, A Broken Blade? Where did the inspiration for this story come from?

A Broken Blade is the story of Keera who is part Mortal part Elf and also an assassin for the Crown. She is forced to serve the king who conquered the continent and drove her kin into hiding. When the King tasks her with killing the Shadow, a masked enemy who is destabilizing the Crown, Keera realizes that she has a choice to make to stay safe or save her people.

The inspiration came from reading a lot of books in this subgenre during lockdown. They were so much fun and I enjoyed them, but I kept noticing that all of the stories took place in colonial societies. I had all these questions about what happened to the Indigenous people of those realms, where were they, how were their lands taken from them? Those questions became the foundation of me creating the world of the Halfling Saga.

A Broken Blade is described as anti-colonial fantasy with indigenous influences. Could you describe what that means?

The story is about Keera who is part Elf and her Elvish kin. As a story it centres the characters Indigenous to the continent and frames the conquering King as the rightful villain. Much of the plot and the impacts on the characters on the story is directly inspired by the history that has happened to my own ancestors – extractive colonialism, establishment of a gendered binary and the weaponization of patriarchy are only a few examples of how the Kingdom of Elverath mirrors our own. A huge part of the series will be uncovering how the Elverin lived before the King came at all and reclaiming that way of life.

Since Geeks OUT is a queer centered website, could you tell us a bit about the LGBTQ+ characters that will be featured in your book?

I would say readers should assume everyone is queer in some way unless stated otherwise. There are bisexual characters, gay and lesbian characters, asexual characters, and ones who don’t conform to the gender binary the king has established. As the series moves forward, something Keera learns is how differently her kin view and live queerness as compared to the king. The Elverin love freely and always have, and they also conceptualize gender in a very different way than the king and his citizens. Keera begins to uncover that in A Broken Blade but it becomes a much bigger theme in upcoming books.

What are some things you hope readers take away from this story?

My first hope is that readers have a fun time but recognize the parallels I’m making between this made up world and our own. I also hope readers seek out more Indigenous books, there are so many out there.

Growing up, were there any books/media that inspired you as a creative and/or that you felt yourself personally reflected in?

My biggest inspiration was the storytelling that happened around me as a kid. Most of it came from my grandma, sometimes my mom or aunties too. Hearing a story around a campfire can really make it come to life and those are some of my most vivid memories. I want to learn how to evoke emotion in that same way.

I think part of the reason I want to be a storyteller is because I never got to see myself reflected in the media I consumed as a child or teenager. There are so few examples of Indigenous characters in popular stories, and when they do exist, they are often stereotyped and poor portrayals. I think I write out of spite in some ways.

What does it mean to you creating a story with queer and indigenous influenced representation?

It means a lot. For me it is the ultimate form of self-expression because so much of who I am and how I see the world is in the book. But in many ways it is also a responsibility. We all receive gifts in life, and I’ve been given a brain to create stories where nothing exist before. It’s important to me that those stories reflect my family, my ancestors in some way. Even when I’m writing about mythical creatures on a made-up land.

My favorite stages are conception of an idea, plotting, and editing. I find first drafts really exhausting and tend to get through them as quickly as possible. To be honest, second drafts aren’t much fun either. But once I get notes back, I fall in love with the story all over again. There are also days where I do not have the strength to write dialogue and will move on to a scene where that isn’t necessary.

You can’t get better at something unless you do it – a lot – and until you get quality feedback on it. Seek out writing partners and friends, share your work, and learn from each other. Every writer has something to teach another, even if neither of you have shared your work publicly. Also if you have an idea that you can’t get out of your head, write it! And when you get to the point where you hate it and you’re convinced it’s the worst story ever told, it isn’t and you needed to keep going.

Currently I’m working on a few projects. The sequel to A Broken Blade is moving through the editing process and will come to readers in 2023. Readers will also be getting a contemporary romance from me later this year. I also have a speculative sci fi story about language and Indigenous sovereignty that I’m very excited about and hope to sell. The best place to stay up to date on those releases is on my socials.

Finally, what LGBTQ+ and/or indigenous books/authors would you recommend to the readers of Geeks OUT?

There are so many amazing storytellers! You can’t go wrong with Rebecca Roanhorse, Eden Robinson, Cherie Dimaline, Billy Ray Belcourt, or Richard Wagamese.