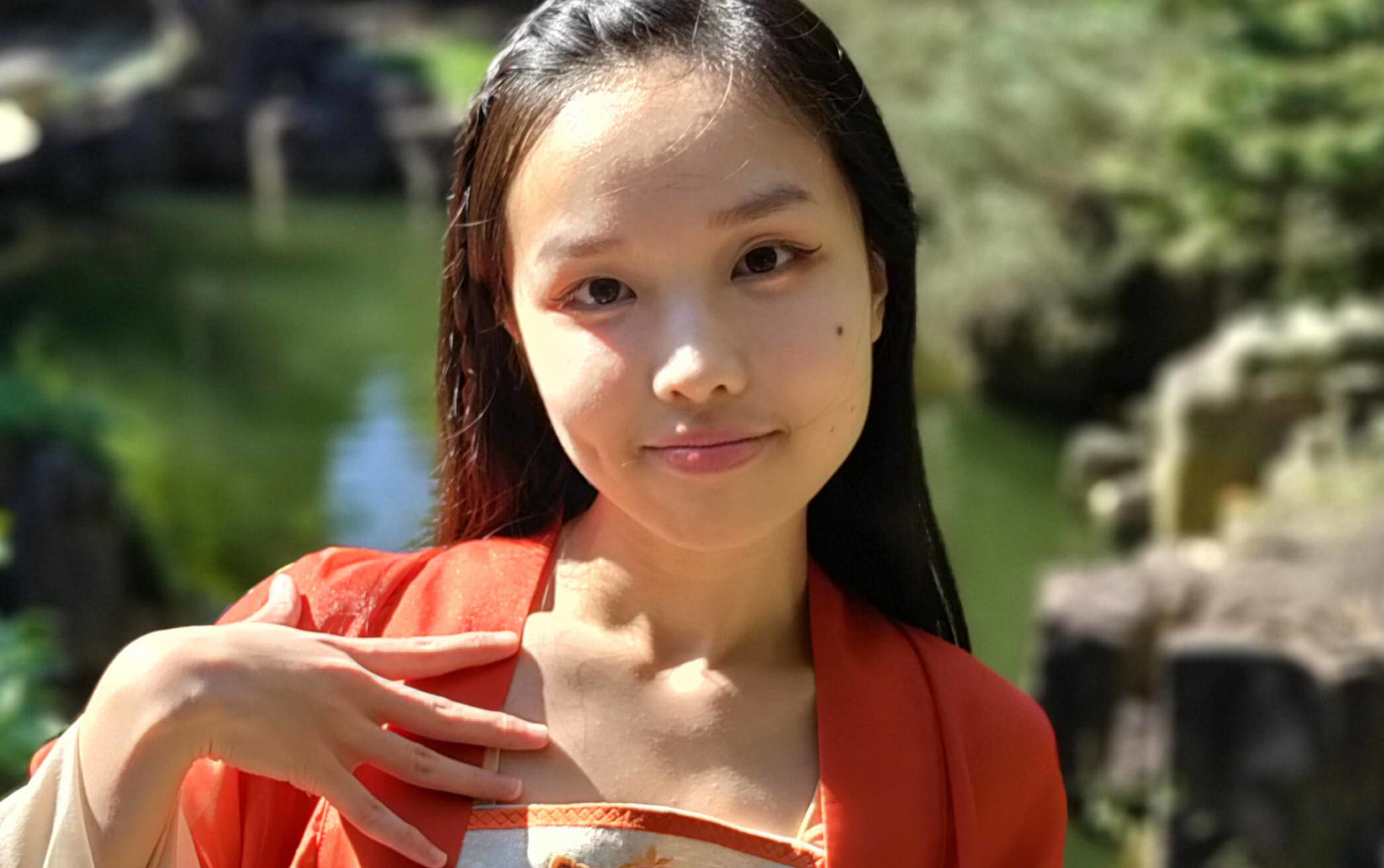 Velinxi is the creator of DPS Only! and the ongoing webcomic Countdown to Countdown. Her greatest passion lies in storytelling through illustrations, which she has been doing for the past few years (with varying stages of success). You can find more of her work on Twitter and Instagram @Velinxi.

I had the opportunity to interview Velinxi, which you can read below.

I’m Xiao Tong Kong, better known as Velinxi online! I’m an illustrator and the creator of the webcomics DPS Only!!! And Countdown to Countdown. I also draw an unhealthy amount of fan art on the side.

What can you tell us about your upcoming book, DPS Only? ? What inspired the story?

DPS Only!!! is about a teenage girl who’s in love with a competitive FPS game called Xenith Orion, but no one knows about her secret hobby, nor her proficiency at the game. Not even her brother, who’s actually one of the best XO players. However, she’s discovered one day, and is inadvertently drawn to competing in a grand XO tournament in disguise, climbing in notoriety and eventually has to face her brother, fears, and the esports world on stage.

I dropped out of art college in my first year in 2019, it was a pretty confusing time in my life. The only sure comforts in my life at the time was my art, the people around me, and strangely enough- Overwatch League, the competitive esports scene of the FPS Game Overwatch. It’s a lot different these days, but OWL was at its peak around then, and I found the atmosphere absolutely exhilarating. I’ve always been drawn to esports, and I loved keeping up with past esports scenes of games like Smash and League of Legends. However, OWL was the first time I was truly immersed, there wasn’t a stream I didn’t watch with my sister. We bought team merch, engaged with the community and memes, went to meet and greets with players, and watched the first OWL finals in NYC. This atmosphere full of adrenaline, excitement, and frustration shared with my Overwatch friends was the main inspiration for DPS Only!!!

It wasn’t all sunshine and rainbows though, and it still isn’t now. My friends and I encountered rather rampant sexism when we played the game, though to be fair- it wasn’t anything new from any other gaming communities we’ve mingled in. It was really only the help and support from each other as well as our male gamer friends and even strangers that made it tolerable. And then there were controversies sprouting up online regarding sexism in the competitive esports community, even in Overwatch. I won’t bring up specific names, because I don’t want to dig at any old wounds of these players, nor bring them to an uncomfortable spotlight again, but many female players had accusations of cheating thrown at them, and were constantly discouraged and harassed from playing the way that other players wouldn’t. It was strange, in a way. Competitive or casual, it seemed that there would always be people trying to stop women from playing competitive games. It was especially difficult to watch these particular women in the spotlight, with so many eyes on them, trying to prove themselves just as worthy as the male player next to them. It’s a lot better these days, and the gaming community as a whole is making strides to be more inclusive, but there’s always going to be those people that refuse to budge, or arguably worse- which is to pretend that there isn’t or hasn’t been a sexism issue at all. These experiences and issues were another core inspiration to DPS Only!!!

In addition to DPS Only (which started as a webcomic), you are also known for the queer webcomic, Countdown to Countdown. What inspired this story?

CTC first started as a passion project in 2015 when I was a Junior high school student, with absolutely no solid guideline or written plot structure. It was just a mix of everything I liked at the time, video games, movies, random spurts of ideas I’d get at 2 am. It’s hard to pinpoint what was the main inspiration for the comic. I just wanted to write one. However, it wasn’t going anywhere, so I scrapped it in 2018. It’s rebooted now, with a more structured story and sustainable art style in the long run. In a way, it’s inspired by the original 2015, and thus- inspired by what inspired that. It’s a complicated situation, but that’s rather fitting for Countdown to Countdown.

Not only do you draw some pretty gorgeous webcomics, but you are also known for your illustration work, particularly for The Scum Villain’s Self-Saving System series, as well as book covers, like Xiran Jay Zhao’s Zachary Ying and the Dragon Emperor. How would you describe your work and process as an illustrator?

I always start with thumbnails, usually several. I (or my clients) pick one out and I get a more refined sketch. From there, it’s all a normal illustrative process, really. I don’t think my process is anything particularly interesting, it’s just a lot of color corrections, over-painting, and more painting. If I get stuck on colors, poses, or lack any inspiration, I always turn to my bookmarks full of my favorite artists. Seeing other people’s works, with such varied yet beautiful art styles always gets my creative juices flowing.

What drew you to storytelling, particularly to comics? Were there any favorite writers or stories that sparked your own love and interest in storytelling?

Shilin and Yuumei are the two artists that come to mind. They were integral to my interest in both art and storytelling when I was in middle school. Years later they still are.

How would you describe your writing/illustrating process? What inspires you as a writer?

Lots of long walks around and inside my house, lots of staring at the wall, outside my window, and lots of sleepless nights trying to come up with something interesting. Of course, just like my art- I also look to other storytellers for inspiration. When it comes to pacing, story paneling, I always look at the comics and mangas on my shelf (Devil’s Candy, Gunnm, and Witch Hat have been my go-to’s for comic paneling these past few years!). For storytelling itself, it’s a hard process of looking inward, and just trying to connect these messy plot-lines and dots I’ve loosely concocted until it forms a cohesive storyline. I also try listening to guides and videos on improving my writing, though I tend to follow these as a springboard, rather than rigid rules. Hello, Future Me on Youtube has some great videos on writing, such as world-building, magic systems, etc.

I like writing and drawing out the parts of the story that I created the comic for. I’m sure most writers and artists can understand this. When one creates a story, they usually always have a part or several that they envision first, that beautiful moment that you’re so excited to show off and spend the rest of your time building up to. That’s always been my favorite part. The challenging part is everything in between, honestly. So it’s 80% suffering and 20% payoff.

I’ve been taking up baking and cooking a lot recently. It’s been a good hobby to have, something that doesn’t strain my eyes like drawing, video games, or reading. It’s also just nice to have an activity to do outside of work or thinking hard about my stories, and just letting myself relax. I’d like to think I make really good cheesecake and cinnamon rolls now.

What advice might you give to other aspiring creatives?

Don’t let your first webcomic be your big magnum opus. Your first story should be experimental, loose, and even nonsensical, just like mine was. You’re going to learn a lot in the process, things that can’t really be taught but must be experienced through trial and error. You must write and draw yourself into corners and fumble, until you can come out of the experience and think to yourself “So that’s what went wrong, so next time I can do this instead”. It’s frustrating because a lot of creatives, especially younger ones, are excited to create their grand story to show to the world- but I highly recommend saving that for later, when you’re more seasoned. You’ll thank yourself for it later.

I’m working on my next big project with tapas! I’ve been working at it nonstop for the past year, and I’m so excited for it to be revealed.

Of course! My current favorite LGBTQ+ comics/ authors include:

Amongst Us by Shiling Huang (who also has the ongoing webcomic Carciphona)
Cucumber Quest by GiGi DG
No. 6 written by Atsuko Asano, manga illustrated by Hinoki Kino
The Song of Achilles by Madeline Miller
The Grandmaster of Demonic Cultivation, by Mo Xiang Tong Xiu (which also has wonderful Donghua and Live action adaptations)
Tamen De Gushi by Tan Jiu

I also want to shout out my fellow webcomic friends, who are currently creating massive, amazing webtoons that are unashamedly queer!