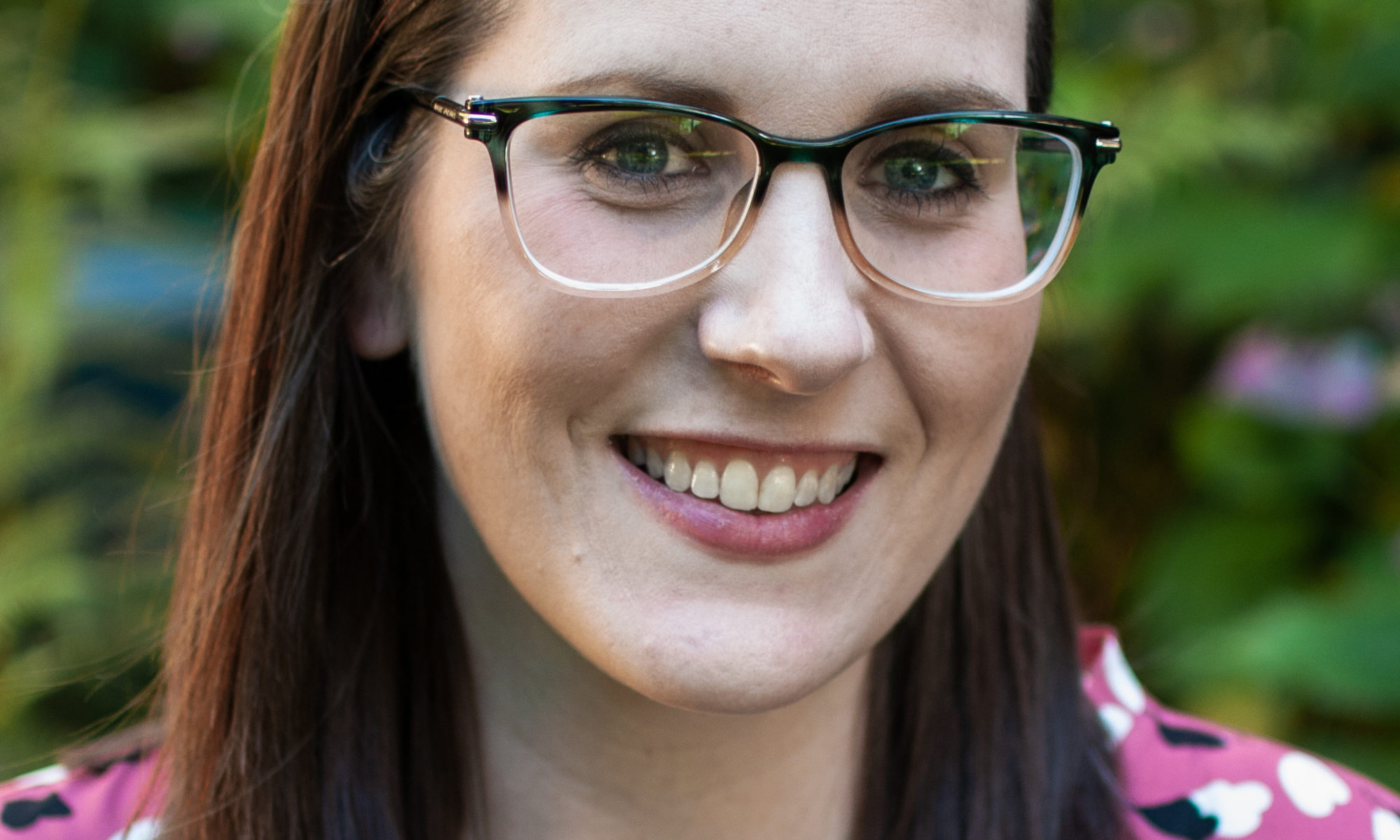 Alison Cochrun is a former high school English teacher and a current writer of queer love stories, including her debut novel, The Charm Offensive. She lives outside of Portland, Oregon with her giant dog and a vast collection of brightly colored books.  She controversially believes Evermore is the greatest Christmas album of all time, and she’s probably sitting by a window right now hoping for snow. You can find her on Instagram and Twitter at @AlisonCochrun.

I had the opportunity to interview Alison, which you can read below.

Yes! Hello! I’m Alison and my pronouns are she/her. I live outside of Portland, Oregon, and I was a high school English teacher for eleven years, but I’m currently experimenting with writing full-time and seeing how that goes!

As a writer, what drew you to the art of storytelling, specifically romance?

I’ve always been obsessed with happily ever afters in stories. My dad raised me on While You Were Sleeping and Sleepless in Seattle, and I just love the magic and joy that comes with a well-earned happy ending. I also began writing my own stories when I was nine and first started struggling with depression. Fiction became a safe way to explore my emotion when I was too young to fully name them. These two things sort of dovetailed into my passion for writing love stories, but it wasn’t until I discovered the romance genre in 2018, and then read my first queer romance in 2019, that I fully grasped the power of storytelling.

What can you tell us about your upcoming novel, Kiss Her Once for Me? What was the inspiration for this project? What tropes can we expect?

Kiss Her Once for Me is about a bisexual artist named Ellie who is in the midst of a quarter-life crisis, working as a barista and barely getting by financially. So, naturally, when the wealthy and charming landlord of the coffee shop where she works, Andrew, proposes a fake marriage so he can access his inheritance, she agrees (in exchange for a chunk of the money, of course). But when they agree to spend Christmas at his family’s cabin to maintain the ruse, Ellie discovers Andrew’s sister is the woman she fell in love with last Christmas. It sounds ridiculous, but my inspiration for this book came from the movie While You Were Sleeping, and the fact that Bill Pullman looks like a hot, butch lesbian in it. So, this is my homage to the fake-engagement, sibling love-triangle shenanigans of that movie. You can expect all the classic tropes: only-one-bed, snowed-in, second-chance romance, hurt/comfort, forced proximity, idiots in love.

Since the protagonist Kiss Her Once for Me is involved in animation, I was wondering if there were any animation projects you yourself personally loved?

I mean, I love Laika Studios and all of their films, especially Coraline. I reference them in my book in a more negative context, but I am a genuine fan! I also read Heartstopper for the first time in the summer of 2020. It was the first queer graphic novel I’d ever read, and it really ignited my interest in visual storytelling. I now have a large collection of queer graphic novels.

Your debut novel, The Charm Offensive, in addition to being a story about queer people in a dating show, was praised for its mental health and Aspec representation. How did you approach writing these elements into your book?

To be honest, neither of these elements were planned when I had the initial idea for the book. I was intrigued by the idea of writing a story about what would happen if someone like me went on a show like The Bachelor, so I disguised myself as a handsome tech genius with abs and began writing. The first draft of the book literally poured out of me– I wrote seventy-thousand words in six days. And when I awoke from that creative fever dream, I found a story staring up at me that was different than what I expected. I’d written about my own experiences with anxiety and depression, and I’d written about a questioning twenty-eight-year-old coming to understand his queerness, which included being on the asexual spectrum. I had drafted the book so fast, that I couldn’t filter myself. What I wrote was honest and deeply personal, and I was proud of myself for sharing those parts of myself. So, through the revision process, I nurtured those elements of the book. I did a lot of research and worked with beta readers to ensure I was handling those topics as sensitively as possible.

Growing up, were there any stories in which you felt touched by/ or reflected in, in terms of personal identity? If not or if so, how do you think this personally affected you as a writer?

I can’t think of a single story I consumed in adolescence that centered on a queer woman, which definitely impacted my personal identity. I grew up thinking there was only one kind of love story, and it involved heterosexual, neurotypical people. But ironically, I had my “Ring of Keys” moment when I saw the play Fun Home in Portland. The way I felt watching a lesbian coming-of-age story was not a straight girl’s response, and it came at the time in my life when I was finally ready to start questioning my sexuality.

As a writer, who or what would you say are some of your greatest creative influences and/or sources of inspiration in general?

The romance community is such a beautiful, inclusive space, and I take so much inspiration from my fellow authors and the vulnerability they show as writers. Especially Casey McQuiston, Mazey Eddings, Chloe Liese, Jasmine Guillory, Helen Hoang, and Rachel Lynn Solomon. I’m also inspired by the queer media I consume like Our Flag Means Death and A League of Their Own. Finally (and narcissistically), I draw a lot of inspiration from my own life and my conversations with my therapist.

I love when the writing is good– when the words come so quickly and so easily, it feels like I’m nothing more than a conduit for the story. I love when I can get so immersed in the fictional world I’m creating, I write scenes in my sleep. I love when I can sit in front of my computer for five hours and it feels like it’s been five minutes. Writing is frustrating when it’s not good. When it takes an hour to write a single sentence (that I just delete anyway). When I sit in front of my computer for five minutes and it feels like five hours. When every single word is ridiculously hard and none of the pieces are fitting together as they should. I think being a writer is about accepting both sides of writing as part of the process and figuring out how to keep going anyway.

Sometimes, I think there is this illusion that once you get published, everything is easy. The truth is, writing is challenging no matter what stage of the publishing process you’re in, and I would want readers to know that I struggle, too! I don’t have some magical talent, and writing doesn’t come effortlessly to me. But it’s something I love, so I have to find ways to push through the hard times as much as I savor the good ones.

Oh gosh! I feel like I’ve been asked so many good questions. But Kiss Her Once for Me takes place in Portland, Oregon, and features a reference to the famous VooDoo donuts. So I wish someone would ask me: Who makes the actual best donuts in Portland? And I would happily inform you, it’s Angel’s donuts on Alberta. Their blueberry old fashion is the actual love of my life.

Find a writing community! Find other people who are passionate about writing to share your joys and sorrows with you during the journey. Get on Twitter and find online friends who can beta read for you, and find critique partners whose feedback seems authentic to your voice. Write together and brainstorm together. Writing can be incredibly lonely and isolating, and I didn’t have a community of writing friends when I started. Now, the friends I have are sometimes the only thing keeping me afloat. Don’t try to go at this alone!

My third book was just announced! I call it my “sapphic road trip romcom about death.” Its actual title is Here We Go Again, and it’s about two childhood best friends-turned-rivals who agree to team up to fulfill their former English teacher’s dying wish by driving him across the country. It’s kind of a romdramedy, but I love it and I’m so excited to share it with readers! It comes out spring of 2024.

So many! In terms of queer romance, some of my favorite authors are Timothy Janovsky, Ashley Herring Blake, Kosoko Jackson, Alexandria Bellefleur, Talia Hibbert, Anita Kelly, and Casey McQuiston. If you’re looking for more sapphic holiday books, check out IN THE EVENT OF LOVE by Courtney Kae and SEASON OF LOVE by Helena Greer!