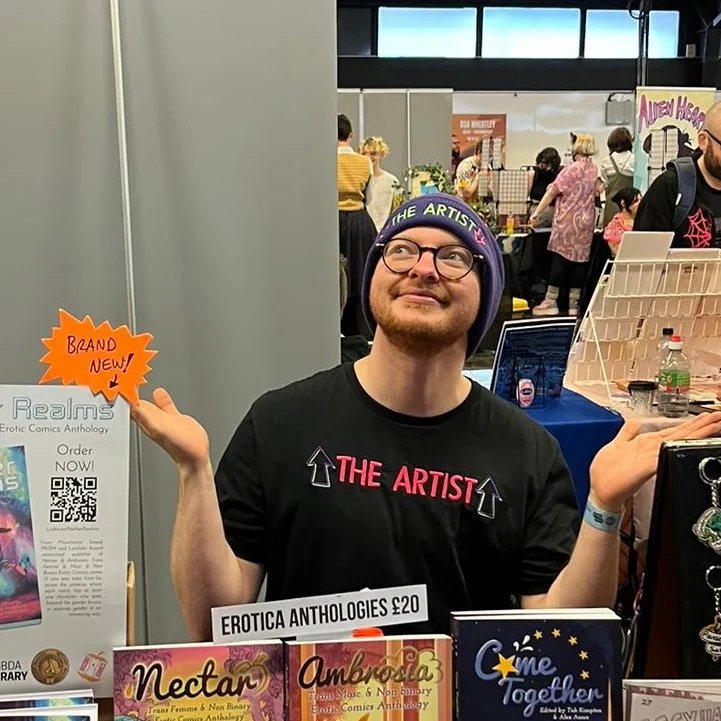 I had the opportunity to interview Tab, which you can read below.

Outside of comics I’m a cosplayer, pole dance instructor, house renovator, and spend any time I have left over throwing ridiculously themed parties and making food to match.

When did you know you were first interested in making stories, and what drew you specifically to comics?

Some of the first bits of queer media I read were webcomics, and I got into drawing stories because I guess I wanted my friends to be gayer (haha). I feel very privileged to be part of that early 2000s webcomic movement where anyone with a scanner was making stories. It’s a time that’s very nostalgic for me now. (Though now I actually have more queer friends so I have to find other fantasies to write about.)

Among your most famous comics is your Khaos Komix series and Minority Monsters, a collection of stories and vignettes about various members of the LGBTQ+ community? What inspired the two projects, and what have you thought of public reception to them since then?

Khaos Komix is a coming of age story that was written while I was coming of age, and really helped me explore my own self a bit during that time; whereas Minority Monsters is a silly pun-filled series of gag-strips and info about gender and sexuality that plays with my love of Mythology.

monsters came about because I drew a shirt design of “Sir Fabulous the Third, The Bisexual Unicorn” for a comic con, sold out of most of them, and then started thinking “What other mythical monster would live in a land of LGBTQIA creatures? An Alphabet Soup Land if you will…?”

Both of those are intended to be quite approachable and have a general idea of LGBTQ+ topics while attempting to be entertaining at the same time. Educating people without patronising them is a fine line to walk, especially as our understanding of these things is constantly evolving. Khaos Komix has some absolute cringe stuff in it, and Minority Monsters already has phrasing I’d like to change even though it’s only a few years old.

What does creating diverse stories mean to you as a queer creator?

I think it’s about trying to make stories that people see themselves in, but also training readers in empathy and connection in people they don’t see themselves in. It’s something that feels like we can always do more, but as a single person I am limited. It’s one of the reasons I’ve enjoyed producing anthologies these past few years, as you get some beautiful and genuine stories from world views that get limited time in mainstream publishing.

As an aspec reader, your webcomic, Shades of A, was one of the first stories I got to see centering an asexual character (which I’m so thankful for!) What inspired the story, and what made you interested in representing asexuality?

To be blunt, readers were asking for it! That’s an interesting thing about webcomics- I’m super tuned into reader demands (which can be good or bad depending…). However I try not to see stories as a check box of minorities I can get through, so the challenge was how to do it well, how to make it a bit messy, how to explore stuff people haven’t touched on before, and how to make it entertaining enough that people will actually read it.

It was around the time 50 Shades of Grey was at its most popular, and I like a lot of people were super frustrated about how kink was represented in media. “An Asexual walks into a kink club” sounds like the set up of a joke, but in it was the glimmer of a story about subverting expectations, figuring out compromises with partners without sacrificing your own boundaries, and laughing at characters being awkward when things don’t go to plan.

Out of personal curiosity (no spoilers to those who haven’t read the book), was the ending to Shades of A something you had planned or did it naturally evolve that way?

I’m a nonlinear writer- I tend to get ideas for little scenes or sections that feel particularly juicy, write those all down, attempt to put them in some semblance of order, and then figure out what scenes can connect the dots. This way is possible when you work with more character driven stories, I do not recommend this for writing a murder mystery.

I learnt early on in my failed teenage attempts at comics that it’s very useful to write a full script, or at least an outline, so you know where you’re going before you start drawing and can pepper in all the little details which will add to everything later.

I adore solid, satisfying endings in the media I consume. I think there’s a lot of pressure to keep a webcomic that fans like going for a long time, but I’m more about leaving people wanting more than letting them get sick of you.

How would you describe your writing/illustrating process? What are some of your favorite/ most frustrating parts of both?

Since running anthologies behind the scenes as an editor, I’ve switched my process over from doing a single page from start to finish in one go, to sketching an entire chapter out at a time, then inking, then colouring, then lettering etc. This gives you a chance to fix things that need moving as early as possible and has really helped keep my work a bit more consistent (inside the chapter at least).

The hardest part is the first stage of Thumbnailing (figuring out what panels go where making sure there’s room for the text), as it’s the blank page. My favourite part is also thumbnailling, as I love creating interesting layouts, especially in one shot short stories where I can do something more involved that I know I couldn’t keep up on a full length webcomic.

I can tell you the question I don’t want to be asked: How do you identify?

I’m in a ‘between labels’ stage of my life right now and really feeling the pressure to say something easy to consume and understand in a twitter bio. But this stuff is complicated, the ‘true self’ is ever evolving, and while labels are good for finding people like you, if they don’t give you joy don’t box yourself into them. I think we’ve been simplifying things down to make them easier to explain for too long, when it’s actually allies who should be explaining to us why they made the world so weird and rigid in the first place.

What advice would you give for aspiring creators?

Whatever work you’re drawing, find a way to make it fun to do the ‘boring’ stuff, because more often than not the boring stuff is most of the project. It’s nice to focus on the end goal of a book or the comic being finished, but spice up the process with podcasts, music, whatever keeps it enjoyable, or you’ll find getting to work on it will become harder and harder.

Also if you aren’t actually enjoying a story, quitting is still an option. A few years ago I started what would be a 300 page epic, but 50 pages in I was miserable and updates were coming few and far between. I changed projects and have been slamming it out ever since.

I feel like I shouldn’t advise webcomic artists to quit and start a new comic, but seriously if you aren’t enjoying a story find something you’d prefer to draw instead. If you work for yourself and hate your job, have a talk with the boss and figure out what needs to change.

Are there any other projects you are working on at the moment and at liberty to speak about?

Sci fi has always been at the forefront of exploring gender as a medium so when choosing the theme for this book it was an obvious choice. We did an open call last Autumn to get the widest range of creators we could, asking for stories that either centered a non-binary character, or does something cool with gender.

I’ve mainly worked in fantasy and slice of life comics but this anthology I’m chucking myself in at the deep end by doing a Time Traveller Mecha story with co-artist Luce Northstar.

I’d like to recommend some of my favourites from people I’ve worked with in previous anthologies, in no particular order: Niki Smith’s The Deep Dark Blue which takes the ‘girl disguises self as knight’ trope and flips it on its head. Alex Assan’s Shaderunners which is a crime noir webcomic about a greyscale world where prohibition banned colour instead of alcohol. Jade Sarson’s Cafe Suada – the energy in Jade’s work is such an inspiration for my own panelling. Also anything from Quindrie press, which is run by our anthology letterer Eve Greenwood so the polish on them is impeccable.