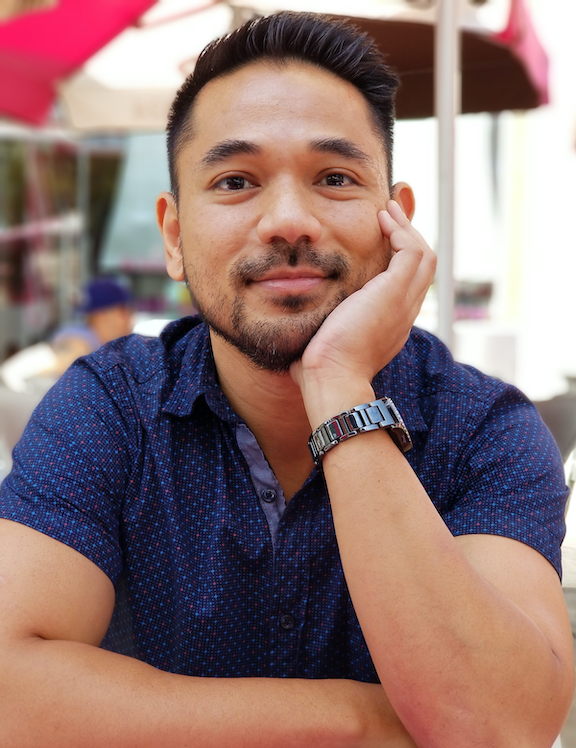 Naz Kutub was born and raised in Singapore and currently lives in Los Angeles with his partner Benson, and his two furry garbage collectors – Alex and Raffe. He will forever be grateful to fried chicken for being a primary motivator in his early years, and also for preventing him from becoming a fitness model because writing is much more fulfilling.

I had the opportunity to interview Naz, which you can read below.

Hi Geeks OUT! I’m Naz Kutub and I was born and raised in Singapore, but currently make Los Angeles home. I write Young Adult novels and my debut – THE LOOPHOLE – was released in June of this year, just in time for 2022’s Pride month.

What can you tell us about your debut novel, The Loophole? What can readers expect?

It’s a tale told in three alternating timelines. The present day sees Sayyed and his journey across the ocean to try and find his missing ex-boyfriend, with the hopes of bringing him home, while accompanied by an alcoholic genie. The second shows his recent romantic relationship with his ex, and the reason for them breaking up. And the third showcases the genie’s origin story and how she came about to be.

I’d written five full-length novels before this, but they’d always featured white protagonists, because there was always this myth that brown-skinned characters would never sell. This was the first time I decided to write a character that reflected me and my cultural upbringing, while allowing myself to infuse a ton of my lived experiences, along with the people I’ve known throughout my life, including my family members. And I’m glad for it, because it got the attention of my agent, and eventually sold in a two-book deal.

As a writer, what drew you to storytelling, specifically young adult fiction and fantasy?

I’m of the belief that it can be near impossible to change the mind of an adult, since our thoughts have atrophied over years and decades of compartmentalization and learning. Whereas the mind of a young person is extremely pliable and malleable and if handled with care, can be guided towards great causes, like instilling empathy. Hence, I think young adult stories is the last chance we get to change a large percentage of minds.

Growing up, were there any books/media that inspired you as a creative and/or that you felt yourself personally reflected in? Or there any such narratives like that now?

I grew up poor hence I’d read to escape what we didn’t have. Lots of books about white kids getting to play with snow or escaping their lives to foreign imaginary places. Growing up in Singapore meant lots of content from the UK, and it’s only now that I see more and more literature featuring brown kids getting to do everyday fun things we never could before. But without that form of escapism, I wouldn’t be writing what I am today.

The book centers on a queer Muslim boy as the lead protagonist. Could you speak a bit as to what that intersectional representation means to you?

Gosh, it’s nice to finally get to see someone like me on the page. I’d like to think I’m adding to the pile of queer brown kids books out there, specifically queer brown Muslim kids. There aren’t a lot of stories that feature us and our upbringing and the turmoil that exist within us while trying to navigate family and religion, but I’m hoping THE LOOPHOLE can be one such story.

Considering The Loophole centers non-Western mythology (specifically the genie/jinn), was there any particular research you had to do considering this element of the book?

The genie’s origin story was based on ‘Orpheus and Eurydice,’ a classic myth about a man who goes through hell to get his dead wife back. I read it a long time ago and had to reread it just to make sure that I do the story justice, but in my own way and with my own twist.

What are some of your favorite elements of writing? What do you consider some of the most challenging?

I love when I get a brand new idea and my brain just starts whirring with the possibility of the plot, and how I can infuse it with conflict and raise the stakes every step of the way. Working out the kinks of the story to make sure I get to a satisfying conclusion is a wonderful exercise my brain can’t seem to get enough of. Plotting and getting rid of plot holes is one of my strengths and I always try to help out friends who get writer’s block when they reach a point in their story they can’t write their way out of.

Uh, this is the toughest question ever, so without getting too Inception-y about it, let’s just go with:

Question: Why the obsession with fried chicken in your book, like it’s even in your bio?

Answer: Growing up, we could only afford chicken once a week, that was how poor we were. But when I was nine, I was one of the top scorers in my studies, and the principal recognized this. So when my mom applied for a license to operate a food stall in my school, he granted her request because he wanted her to make sure I was taken care of. Fried chicken became a miraculous, everyday thing that I could never get enough of. To this day, it signals success in everything I do, which is why I always celebrate any achievement with it.

Learn how to find joy with it and not expect anything out of it. Success may not come by, not in a long while, and maybe never, but if you know you want to write for life, then you’ll find that it doesn’t matter if it ever comes because even being able to complete one piece of writing is a major accomplishment to be proud of. Writing a novel is something a lot of people wish they could do once in their lifetime, and to write hundreds of pages of a complete story arc all the way to ‘THE END’ and then taking a break, before starting all over again with ‘CHAPTER ONE’ shows that you may want to do this for life because it just feels like the oh-so-right.

I have a short story in an anthology coming out in May 2023 that’s a queer retelling of Bajirao and Mastani, along with my second book that’s scheduled for February 2024, which should be announced pretty soon.

Everyone should check out Erik J. Brown’s ‘ALL THAT’S LEFT IN THE WORLD’ and Brian D. Kennedy’s ‘A LITTLE BIT COUNTRY.’ Both were released this year and will bring so much joy to readers of all ages.