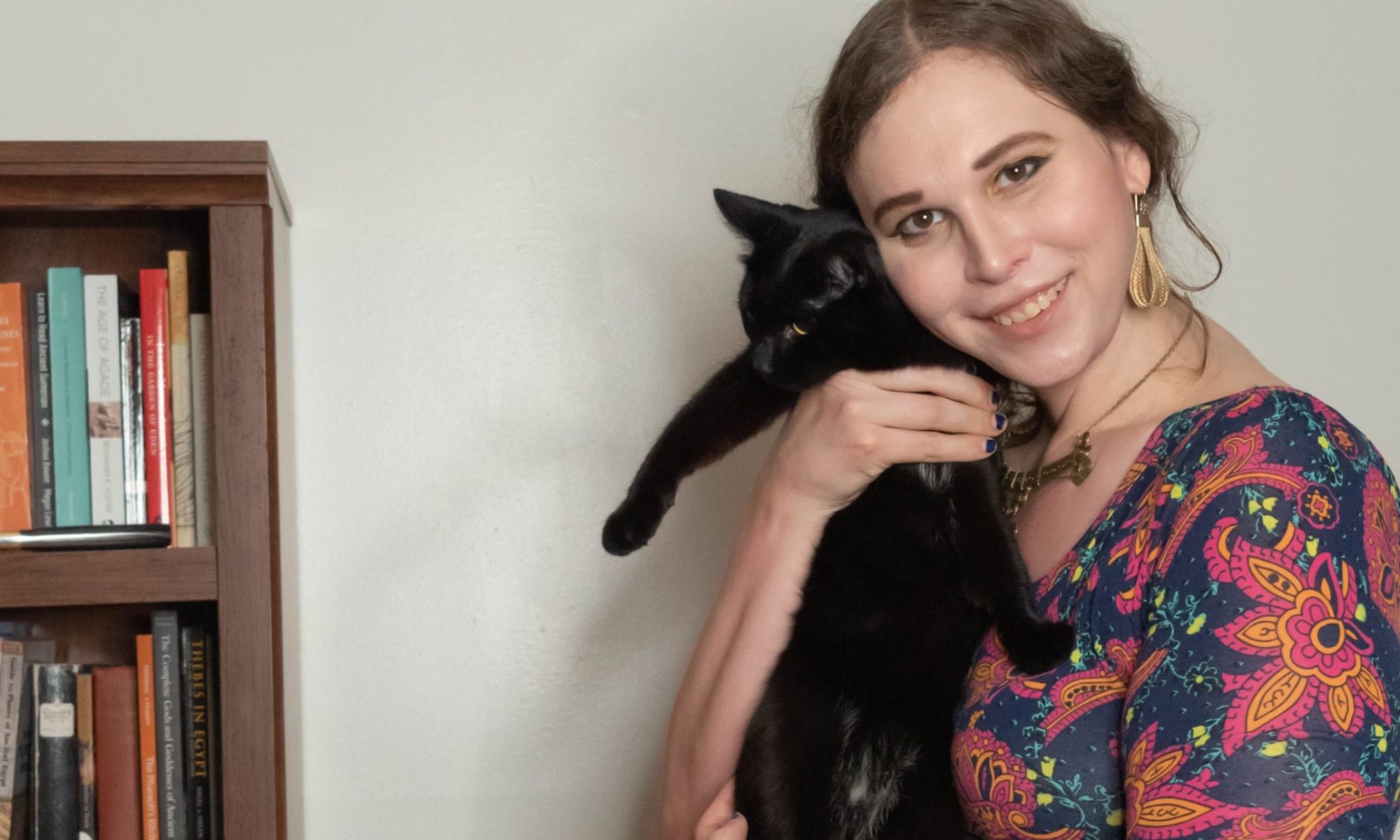 Maya Deane first retold the Iliad at the age of six. Athena was the protagonist; all six pages were typed up on a Commodore 64; there were many spelling errors. (She has only doubled down since then.) A graduate of the University of Maryland and the Rutgers-Camden MFA, Maya lives with her fiancée of many years, their dear friend, and two cats named after gods. She is a trans woman, bisexual, and fond of spears, books, and jewelry. Aphrodite smiles upon her.

I had the opportunity to interview Maya, which you can read below.

Sure! I’m a novelist and a visual artist with a lifelong obsession with history (especially ancient history) and mythology, particularly mythology in its historical, changing context.

What can you tell us about your book, Wrath Goddess Sing? What inspired this story?

Wrath Goddess Sing is the story of the young trans princess Achilles, who has run away from her home in Phthia to live as a woman on the island of Skyros, where she has found trans community and love. But the patriarchal world of the mainland follows her to Skyros, for she is the daughter of a goddess, and as the Achaians mount a war to take back their stolen queen Helen, Athena, the Silent One prophesies that only with Achilles’ spear can Helen be recaptured. Unwilling to fight as a man, Achilles prepares to die, but Athena offers her another path.

While other authors have reimaged the myth of Achilles in queer context, in particular The Song of Achilles by Madeline Miller, your version of Achilles is a trans woman. May I ask where that idea came from?

One long-standing episode/variation in the myth of Achilles is her sojourn on the island of Skyros, a common theme in art from pre-Classical times to the 18th century. On Skyros, Achilles lived as a woman named Pyrrha for years, and even had a relationship with another woman, the princess Deidamia. Some versions of this story have framed it in horrifically transmisogynist terms, like the Roman writer Statius who wrote Achilles as a cross-dressing rapist who invaded women’s spaces to sexually assault them, so in Wrath Goddess Sing, I offer a rebuttal: what if Achilles lived as a woman because she was a woman?

What draws you to Greek mythology, and what are some of your favorite stories/ deities?

I’m particularly drawn to the way Greek mythology tries to make sense of the catastrophic collapse of the Bronze Age world. Much of Greek myth was created during a literal post-apocalypse by the impoverished survivors of the wreck of a rich, sophisticated, multicultural world, and from Homer and Hesiod on we see a grappling with the fallout of the end of the Bronze Age. I’m fascinated by the stories of the Argonauts, which seem to preserve memories of Mycenaean Greek nautical expeditions, and by Athena, whose myths often put a veneer of order over terrifying chaos and horror. And also by Aphrodite Ouraneia, the older version of Aphrodite born from the castration of Kronos, who seems to be a trans-coded sky goddess in the tradition of Inanna and Ishtar before slowly being tamed into Zeus’s daughter Aphrodite Pandemos by the Archaic period.

What inspired you to get into writing, particularly speculative fiction? Were there any writers or stories that sparked your own love and interest in storytelling?

I grew up thinking writers were the most incredible magicians, and Tanith Lee’s books saved my life more than once as a child. Wrath Goddess Sing, like all my books, is a story I’ve always needed, a story that would have made a difference if I encountered it younger, a gift I can offer to others as Tanith Lee and others offered their gifts to me.

How would you describe your writing routine?

What are some of your favorite elements of writing? What do you to be some of the most challenging?

I love lyricism, point of view, and bringing worlds to life by finding those details that magically combine with other details to summon up a whole vanished time and place. Most challenging is probably the enormous amount of research that it takes to get things right.

What advice would you have for aspiring writers? Any specific advice for other queer writers?

Find mentors who know what you’re actually trying to do and have done similar things themselves. You need someone to tell you how the game is played, how to navigate it, how to manage your expectations, what to do, how to thrive. And then practice, and be patient, and write something wonderful.

I’m working on a story set in late Bronze Age Egypt at the height of the 18th dynasty colonial empire. The main character is a captive from the provinces of Kna’an trying to get home to her beloved father and brother, and trying to wreak horrible vengeance on the treacherous sister she used to idolize. It’s sort of a retelling of the myth of Joseph in Egypt, but it’s also a meditation on empire, power, time, and love.