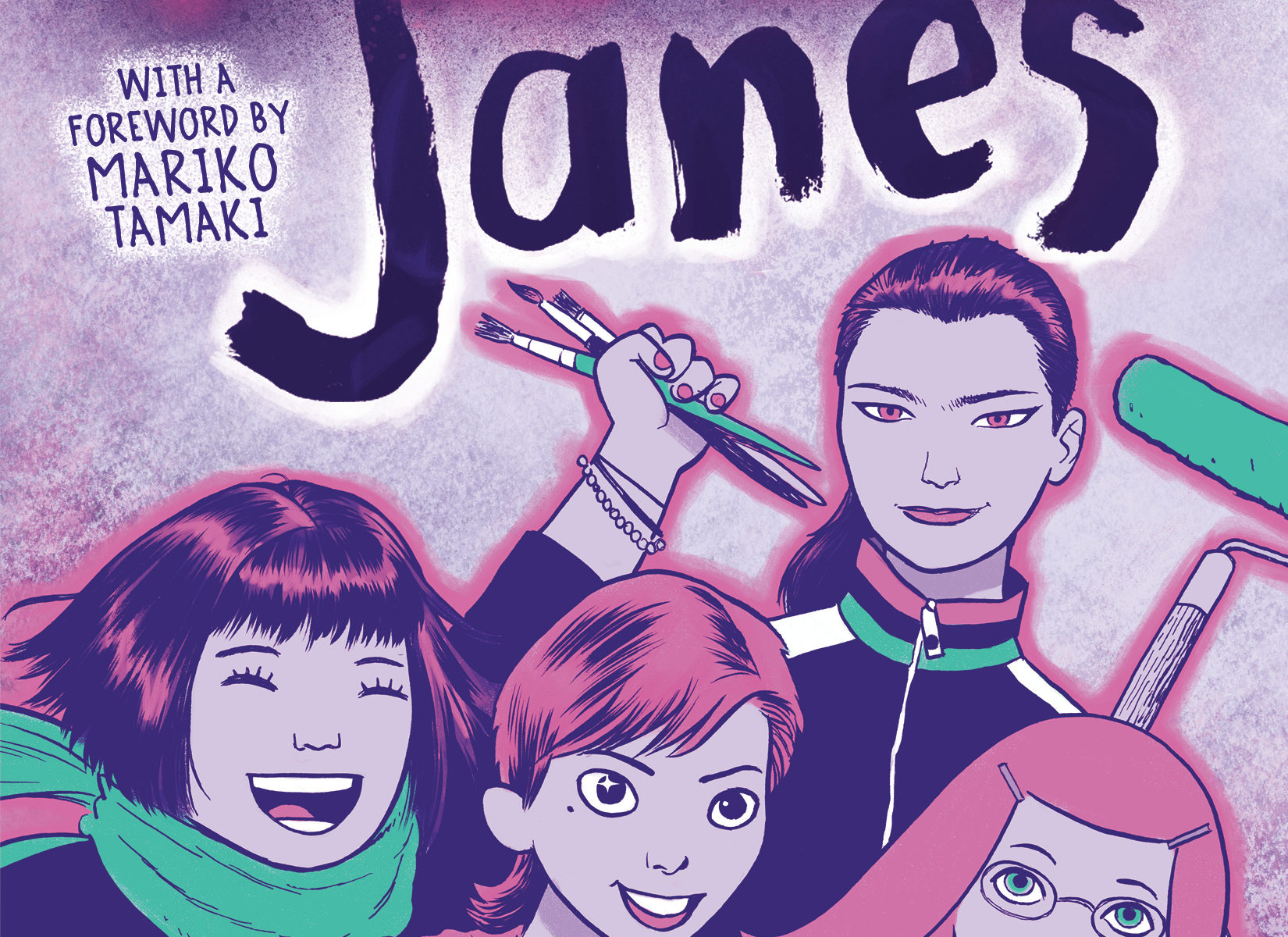 With a new edition of The PLAIN Janes available now, Geeks OUT’s Michele Kirichanskaya had the opportunity to interview the creative team of Cecil Castellucci and Jim Rugg about the original release, what makes this new expanded hardcover edition so special, and more!

It’s been over two decades since the original PLAIN Janes graphic novel debuted. What was the impetus for bringing it back in a new hardcover edition, along with the triquel, Janes Attack Back?

Castellucci: Echoing exactly what Jim says. Also, it felt like when The PLAIN Janes came out, the infrastructure for kids comics wasn’t really there. We were really eager to have it come out when it could actually be supported by bookstores and libraries who now have such great curated sections. It was hard to be a little bit ahead of the curve with the book.

Throughout the books, art fulfills a number of roles in the stories of the Janes, acting as a source of healing recreation for the Janes and as rebellious protest against homogenization and terror, carried itself through the vehicle of comics. What is the importance of art to you?

Rugg: Art has always been a source of escape, joy, expression, and hope for me. It’s a way to connect with others–something I really enjoyed bonding over with Cecil. Cecil exposed me to a lot of public art, concept art, and other art that informed The PLAIN Janes.

For me, art is a way to see and better understand the world through other people’s experience and expression. It was my dream for a better life when I was growing up in a small town and felt alone, like I didn’t belong. And it’s become my livelihood as an adult. Art has given me so much and I hope my art pays that forward with others. And by art, I do mean comics!

Castellucci: To me art saves, as I write in the book. I think it is what helps us to make sense of our world and what it means to be human. It can soothe, it can inspire, it can incite, it can heal, it can connect. For me, art is everything. And I mean all types of art. I feel so incredibly lucky to be able to tell stories and make art as a profession.

I think it would be safe to say that the original books touched upon very hard truths, drawing parallels between the attacks on Metro City and events following 9/11. Nearly two decades later, our generation is still navigating a terror-world, touched by gun violence and attacks on human rights around the world. In what ways has the audience changed since the original debut versus today? How do you feel you yourselves have personally changed?

Rugg: The relevance of The PLAIN Janes is good and bad. Obviously, you want to tell stories that feel relevant. But in this case, it’s sad because of the parallels that you mention. One of my favorite parts of the Janes is how Cecil was able to show the Janes’ art in so many ways–first as underground fun (almost like punk rock), then community-based and public, and finally as activism. I think that reflects how the audience has changed. People are so active and engaged today. Personally, I think I’m more aware of the challenges that we face today and the role that art and stories can play in this ongoing conversation.

Castellucci: I agree with Jim. I wanted to tell a story about how art saves us in times of trauma.  How it can make sense of a world gone mad. I strongly believe that it does that. It actually pains me that the book is still relevant, if not more so. But I also hope that it helps people of all ages to remember that even when it feels like nothing can be done, something can be made. And that art helps us to navigate big complex feelings and helps us to have a common language with which to be able to affect change for good.

Which of the Janes is most modeled after yourself? If you could create a fifth Jane what would she/he/they be like?

Rugg: Probably Jane Beckles since she’s into art. If I could create a fifth Jane, she would be a skateboarder!

Castellucci: I think they are all different facets of me! But I think probably Main Jane as well because she’s the instigator, and as a writer I instigate. A fifth Jane, huh, I actually think of Payne who arrives in book three to be that fifth Jane!  But a sixth Jane would be Jane that had wanderlust. A world traveler Jane.

Where do you see the Janes in the future? What would they be doing?

Rugg: Main Jane is an international artist, documentary filmmaker, and works with people to make art (young and old). Brain Jane is a physicist and robotics engineer. Theater Jane is a writer and director (stage and video). Polly Jane is a coach, teacher, and ultra-runner.

Castellucci: Ha ha. I think Main Jane is a fabulous contemporary artist. Brain Jane works for NASA and builds rovers that explore other worlds. Theater Jane is a director. Polly Jane is a dancer!

If the characters of your books could interact with other characters from any fictional universe, which one and who would they be?

Rugg: They would interact with Jason from Friday the 13th and they would figure out a way to defeat him and save Camp Crystal Lake.

Castellucci: They would be in the Magicians and be the magicians who have art magic.

The discussion of mental health plays a major part in the book, from Jane’s and Jane’s mother’s experiences with PTSD and anxiety. In what ways do you think art can help with mental health, or just coping as Theater Jane would say the “crudeness of reality”? (Paraphrasing George Bernard Shaw “Without art, the crudeness of reality would make the world unbearable.”)

Rugg: Art can help mental health in a lot of ways, and art therapy has been used with people suffering from PTSD. Some art making is very meditative which can be a good thing for anxiety and the “crudeness of reality.” Art is a way to connect with others which can be a very healthy thing–interacting, connecting, sharing.

Castellucci: I think it goes back to being able to express things when you lose the ability to articulate that fear or dread or anxiety. Sometimes making art leads you to the next step of being able to cope.

Who are some of your personal artistic and literary influences? Did any directly inspire or influence The PLAIN Janes?

Rugg: A lot of my influences come from comics. Dan Clowes’ Ghost World is a big influence and it featured two high school girls as protagonists. Love and Rockets, specifically Jaime Hernandez’s Hoppers’ characters from the early days, when they were young punks.

Castellucci: Yeah, for the Janes, I’d say exactly the same as Jim. Ghost World and Love and Rockets.

Any future plans for The PLAIN Janes or other independent projects?

Castellucci: Well I always hope that someone will make The PLAIN Janes into a tv show or a film.  Right now I’m working on Batgirl over at DC.

Cecil Castellucci is the author of books and graphic novels for young adults including Boy Proof, The Plain Janes, Soupy Leaves Home, The Year of the Beasts, Tin Star, Don’t Cosplay With My Heart, and the Eisner nominated Odd Duck. In 2015 she co-authored Moving Target: A Princess Leia Adventure.  She is currently writing Shade, The Changing Girl, an ongoing comic on Gerard Way’s Young Animal imprint at DC Comics. Her short stories and short comics have been published in Strange Horizons, Tor.com, Womanthology, Star Trek: Waypoint and Vertigo SFX: Slam! She is the Children’s Correspondence Coordinator for The Rumpus, a two-time Macdowell Fellow, and the founding YA Editor at the LA Review of Books. She lives in Los Angeles.

Jim Rugg is a comic book artist, bookmaker, illustrator, and designer. His books include Street Angel, The Plain Janes, Afrodisiac, Notebook Drawings, Rambo 3.5, and Supermag. He is a recipient of both the Eisner and Ignatz Awards and he teaches visual storytelling at the School of Visual Arts and the Animation Workshop in Denmark. He lives and draws in Pittsburgh.