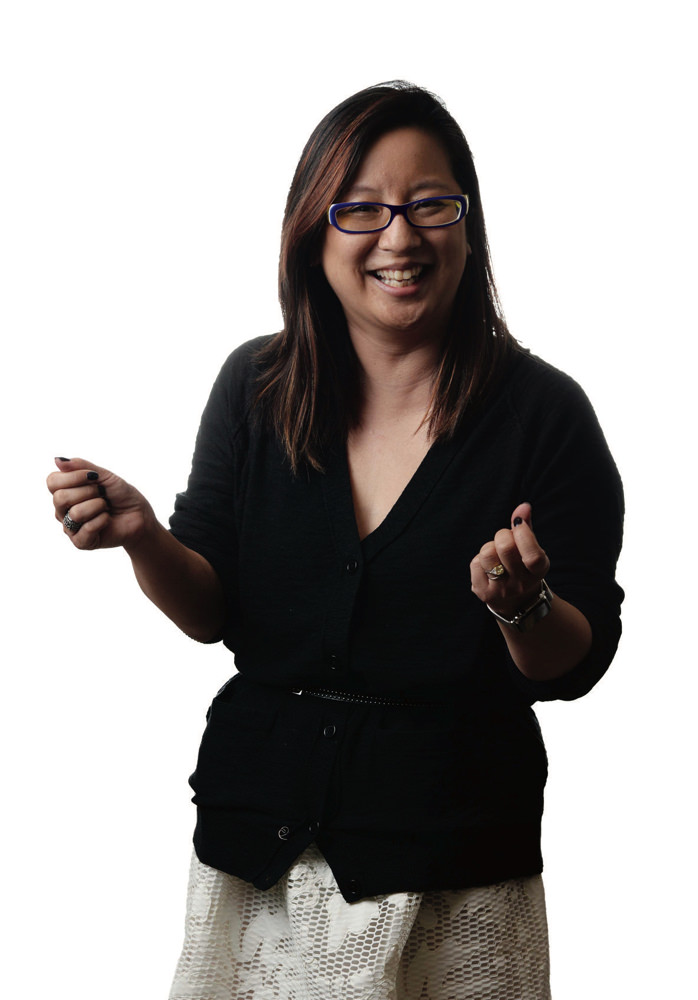 Chris Allo here for our first creator spotlight of the New Year. Myself and Greg Silber had the opportunity to speak with comics writer, Amy Chu, at last year’s New York Comic Con. Amy is a Korean-American and an advocate for women and Asians in comics. She’s also one of our favorite allies!

Amy is a self-starting Harvard graduate who formed her own company, Alpha Girl Comics, in 2010 with her friend, Georgia Lee. They felt there was a severe lack of female voices in the comic book industry at the time and wrote several stories for the Girls Night Out anthology series which they also published!

Amy has worked steadily over the past 12 years with projects at Marvel, Valiant, DC, Dynamite and more. She has a fantastic run on Red Sonja for Dynamite Entertainment and wrote Poison Ivy: Cycle of Life and Death with artist Clay Mann. She currently has several projects with Archie Comics.

Greg Silber: When did your interest in comics begin? What was your first comic book? What was the thing that got you into comics?

Amy Chu: I think my journey is very atypical. I don’t remember the first comic I read. It was probably an Archie, honestly. You know I didn’t get into comics until much later, right?

AC: It wasn’t my lifelong dream or anything. The most interesting comics I was reading were when I was at MIT. MIT… had this long box, and I was reading through the long box and thought “cool” because they weren’t superhero comics. They were other things. It was Elfquest, it was John Sable, stuff like that. What I realized was “comics are actually multigenre.” After many years I was hanging out with one of my friends who wanted to start in comics. I remembered the comics I read and thought “you know what, I can do this. I know a little about comics, you know?”

GS: What are the positives of working for other companies as opposed to working for yourself? What do you like about working for those different companies?

AC: Of course working for Marvel and DC, there’s added validation, especially if you’re a fan of that particular universe or character. Doing Poison Ivy is an honor. Doing Wonder Woman is an honor. And let’s face it, you get paid doing that. When you’re working for yourself, you don’t get paid! Cash flow, right? But absolutely if you’re starting out, you’ve gotta self publish. You’re not going to get work from Marvel or DC otherwise, unless you’re like Darryl McDaniels and already a rapper with a massive fanbase. You don’t get that choice. You don’t get the luxury to say “what do you prefer?” It’s a professional luxury to say that.

GS: In terms of projects like work-for-hire, what kind of projects or content do you really like writing? What are some of the projects you’ve worked on that really satisfied you as a writer?

AC: That’s such a broad question. I do like to take underdeveloped characters and give them more agency. I do think it’s ridiculous that there are so many characters, especially female characters and characters of color, that really have been given the short shrift. But I don’t like it if I am basically pigeon-holed in that space. Obviously, I like to write Batman and Superman! But everyone does, and I get a big thrill out of giving my take on certain characters, and when people like my take on it.

GS: Are there any creators lately that inspire you? Or contemporaries working now?

AC: I mean, anyone working in comics is inspiring, because it is a bear! You’ve gotta have a lot of grit and perseverance to make it in this business. Anyone who’s still around, honestly, is an inspiration. I love Sean Von Gorman. He almost sold out of his new book here. That is just like, super perseverance.

AC: Yeah, there’s a lot to be said for people who are just original, and doing it. Jim Mahfood… let me do a special callout to Jim Mahfood, who was so special because I brought my entire Kubert School class over, and he didn’t even bat an eye. He was so great with them, trying to be inspiring but also telling it like it is. He’s been doing it for 20 years, and he’s trying to do his own vision: making his comics, writing, and lettering, and doing the whole thing. And you know how it is: you can do things, and get the paycheck like I do, and he has a very specific creative vision that he fights for and does. To be able to do that and tell my students what’s going on, I really respect that and like that.

GS: As someone who works in mainstream comics, what do you think the future of LGBTQ representation looks like there?

AC: Oh, I think it’s great! I mean, there’s obviously room… the thing that annoys me of course is tokenization. I’d like to get to a point where all stories are all valid and represented well, rather than being like “oh, this is the LGBTQ story.” It should be taken for granted. You know what I’m saying? All stories should be mainstream. We should not be like “oh this character’s this or that.” All characters should be represented. And I also like to think that all the stories are equally well-developed. We are in this weird time where there are certain stories that… look, I can say this as an incoming CBLDF member, that the very idea that there is pushback on some of these stories based on sexual orientation or that reference anything, is ridiculous. We still have, definitely, a ways to go. Especially some of the reactions to the trans community in particular, in terms of creators, is outrageous. Right? I think it’s intolerable. If people are not rallying around these stories and these creators, there’s something really wrong with this community. It shames me to see some of the actual creators having issues with this.

GS: Generally speaking, are there any specific types of projects or genres that you really like working on? What are some projects you’ve worked on that really satisfied you as an editor?

AC: I don’t do too much editing except for myself, but if you know anything about me you know I like dabbling. I like all genres. I think everything is game and down for anything, and I don’t like getting into a rut creatively. Every once in a while I’m like “maybe I should do more horror?” That’s definitely something I look forward to. Maybe some more crime? Because I always tend to react when people are like “oh, women don’t do this,” that I find really annoying. You don’t think I can write true crime? I’ll show you!

AC: Yeah, let’s not be ridiculous. Let’s look at history. I’m actually doing some horror right now, with a female artist. So that’s quite exciting. There is a little bit of a fan reaction that’s like “oh, really? Let me go back to some of the original horror written by women.” So I think that’ll be fun.

AC: Again, such a broad question. It’s really not as much about licensed content as the specific licensor. Some licensors are like “we love what you do. If we like what you do, go ahead.” Other licensors are like “no no no, I need to vet every single thing.” It’s really that. I think there’s this idea where some people think licensors are bad, don’t do licensed comics, it’s not right. But I do licensed comics because I’m a fan. Look, I did the X-Files because I’m an X-Files fan. Why wouldn’t I? It’s your choice. If you’re like “I only want to do my own stuff” than that’s your prerogative.

GS: What lesson or advice would you give to aspiring writers and artists today? What do you wish you knew then that you know now when it comes to being a working artist in today’s industry?

AC: Finish what you start. Don’t get caught up in perfection. Get it done, and keep going. Look, I always say, if you have other options, do other things! You know? Because really, this is for people who are like, “I just can’t think of anything else.” If you wanna do this as a hobby, go ahead. Get it done. And then decide, do you want to do it again? Then you kind of know. I meet so many people who are like “I really want to make comics,” and I’m like “there’s nothing preventing you. Make your comics.” Get it out of the way. Get it out of your system. After that, if you want to make another comic, now you know. But this idea that you’ll be 60 years old and you’re still thinking “gosh, I wish I made a comic…” just do it!

GS: If you could pick your own project, like a mainstream thing, what would you want to work on?

AC: Well that’s tough, because it’s not like I’m necessarily a fan of one specific character and I absolutely need to do that. I think the greatest challenge is doing a team book, and I think that’s particularly tough. I want to do X-Men, for example. Just because I think it’s technically very difficult. Also because I just gave Chris Claremont a sandwich! I’m thinking X-Men. And let’s be real. His stuff is amazing. There’s aspirational right there. I’d love to do Batman just to say I did Batman. How many women did Batman? Just Becky Cloonan, basically.

GS: Is there anything new on the horizon? What’s your next project that you could talk about?

GS: Thanks Amy, you can check out all of the latest news about Amy and her upcomig projects, here.

Gregory Paul Silber is a writer and editor with bylines at PanelxPanel, The Daily Dot, NeoText, Shelfdust and more. His humor column, “Silber Linings,” appears every Friday at The Comics Beat. Follow him on Twitter and Instagram @GregSilber.”