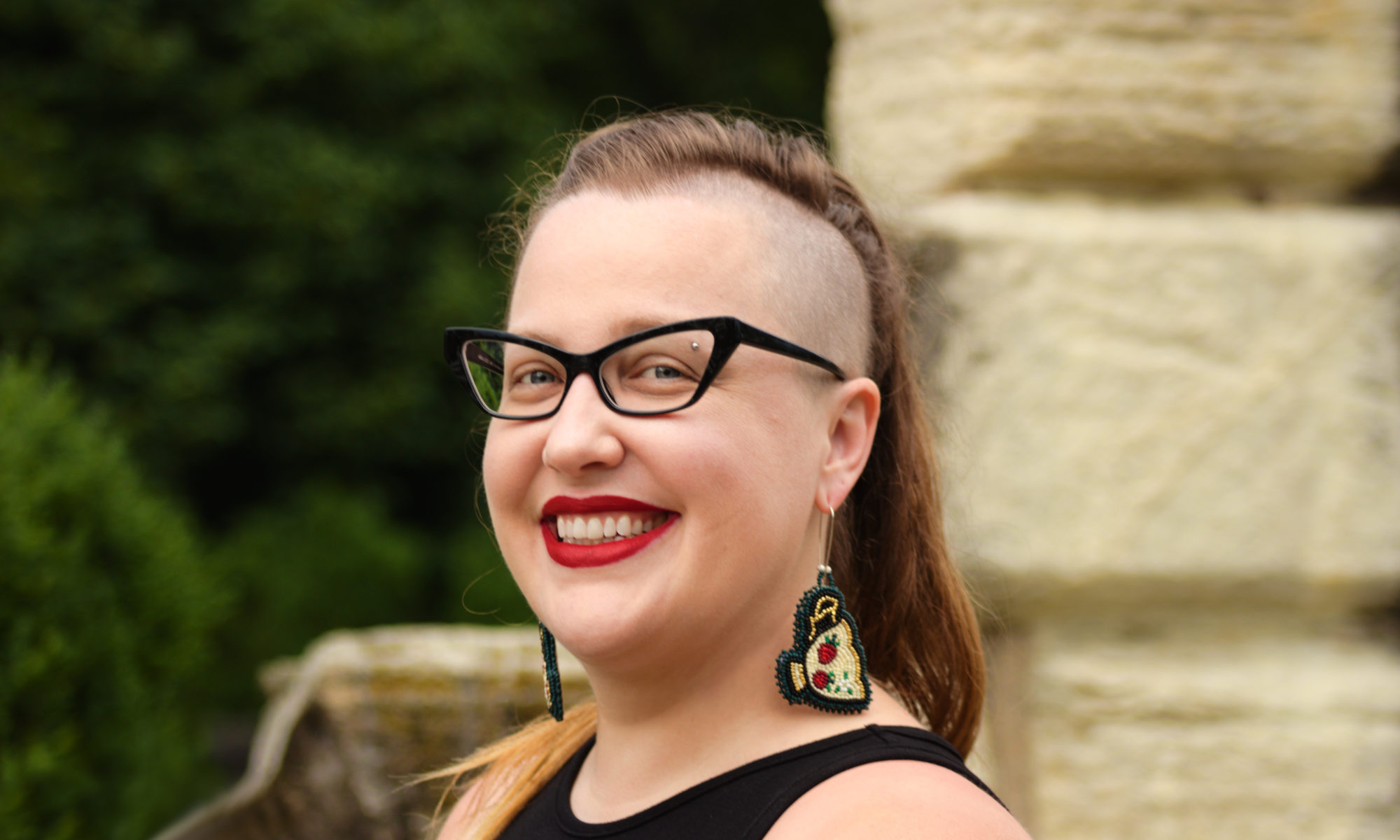 Jen Ferguson (she/her) is Métis and white, an activist, a feminist, an auntie, and an accomplice with a PhD. She believes writing, teaching and beading are political acts. The Summer of Bitter and Sweet, her debut YA novel, is out now from Heartdrum/HarperCollins. She lives in Los Angeles.

I had the opportunity to interview Jen, which you can read below.

Hi, I’m Jen! I’m queer and totally geeked out. I have a PhD in English and Creative Writing but what that really means is I’m curious and love research. I’m Métis and white, an activist, a feminist, an auntie, and an accomplice who is down to protest and do the hard work. My favorite ice cream flavor is mint chocolate chip and I never say no to nachos. Never.

As a writer, what do you think drew you to young adult fiction?

In 2016, I had just finished my PhD and I was super disillusioned by books and writing. I’d been writing for a long time and kept getting my adult novels rejected by agents. Plus, after graduation, I couldn’t read. As someone who discovered reading for pleasure at Girl Guide sleepaway camp at the age of 12, and read voraciously every day afterward, this was a horror.

What got me back into reading and writing were the young adult novels I checked out from the library in Wolfville, Nova Scotia that year. They introduced me to the wonderful, challenging world of teen fiction and I got really excited about what you could do as a writer when you wrote for teens. The rest, as they say, follows from there.

What can you tell us about your latest book, The Summer of Bitter and Sweet? Where did the inspiration for this story come from? Growing up, were there any books/media that inspired you as a creative and/or that you felt yourself personally reflected in?

The Summer of Bitter and Sweet is about 18-year-old Métis teen Lou, working at her family’s struggling organic dairy and ice cream business alongside her recently-exed boyfriend, her best friend who is going through mental health issues of her own, and her once friend, King Nathan, who has returned to town after a three-year absence. On top of all of this, Lou’s white biological father has been released from prison and he wants a relationship with her—something she does not want. At all. The book features many secrets and lies, and a teen discovering her sexuality and owning her identity alongside tones of ice cream.

I’ve talked about inspiration a lot in the last few weeks and my inspiration is related to the lack of media where I saw myself reflected. What I’ll double down on here is that I’d never a read a book with a demisexual protagonist until Claire Kann’s Let’s Talk About Love in 2018, nor had I ever read a book with a Métis protagonist until Cherie Dimaline’s The Marrow Thieves in 2017. So I wrote one.

In a lot of ways, Lou’s story comes out of me finally being ready to write a Métis demisexual teen girl’s journey—so that teens who need stories like this, like I desperately did at that age but didn’t have, won’t miss this kind of representation.

As an Aspec reader, I’m always excited to see more asexual/demisexual representation in the world. Could you talk about what featuring this type of representation in The Summer of Bitter and Sweet means to you?

Like many other marginalized identities, there aren’t enough stories out there about our experience written by us. But there’s something about asexual spec stories: we’re queer, but we’re not the right queer according to so many people.

So to have a book, published by one of the big publishers, that’s very much a story about one ace-spec teen’s experience, I’m completely and totally overjoyed. Wait, no. There is no such thing as overmuch joy. I’m simply thrilled.

One thing I noticed about the (beautiful) cover was the protagonist’s earring, which I believe in other interviews you mentioned related to Indigenous beading and crafting. Would you mind elaborating on that?

Lou’s mother gets into beading as a way to reconnect to her culture and to find her own way through trauma. I also got into beading when I was processed a lot of the colonial trauma that comes from being Indigenous in Canada. So it was so important for me to include that in the book.

I’m also just totally geeked by the fact that my good friend Katherine Crocker beaded a replica pair of Lou’s earrings for me to wear!!! They are my favorite thing!!!

What are some things you hope readers take away from this book?

Alongside this, I want readers to take away something about being supported by and supporting your community. That your kin and community are there for you. And that you have to be there for your kin and community too. I’m not saying to keep toxic family in your life. Kin can be those you’ve chosen. But it’s okay to need help, to trust others with the vulnerable parts of yourself. It’s important to learn how to hold the vulnerable parts of others and to keep them safe.

Oh, I absolutely dread drafting and adore revising. So it’s always tough when I have to get a new story on the page—but when it’s time to revise and make it better, then I’m having fun.

If you could make any animal into a pocket-sized animal, which would you choose?

Ahhhh, thank you for asking me this!! I would totally miniaturize a buffalo and keep them with me at all times. I love them so much! I’d only buy shirts and dresses with pockets. But if I got to miniaturize a second pocket animal, it would totally be a raccoon. They just get into so much mischief. I do love mischief.

Stop calling yourself an aspiring writer. If you write, you’re a writer.

And bonus advice because I’m feeling it: this business is full of rejection. Even after you have big success, you’re still going to be told no a lot. So work on developing tools to help yourself navigate this. The more tools you have at your disposal, and the more you know how to use, the better on this ride that is called becoming a published writer.

Yes! My second YA contemporary novel is out from Heartdrum in 2023.

The book stars Berlin, a depressed perfectionist bisexual Métis teen; Cameron, a Cree teen who laughs at everything, even the things that hurt; and Jessie, a white settler who is both utterly boy-and-girl crazy. Together they’re going to take down capitalism. Or at least save Pink Mountain Pizza, an independent shop where the ragtag band of teenaged employees are largely left to their own devices to serve up weirdly delicious flavors like peanut butter and jelly pizza, each slice garnished with sharp cheddar. As they try to organize the community, they start to piece together rumors and gossip hinting at a much bigger story: the disappearance of a local Cree teen girl, who Berlin thinks she may have seen, late one night, closing the store, the day before the franchising news was revealed.

Finally, what LGBTQ+ and/or Indigenous books/authors would you recommend to the readers of Geeks OUT?

The queer and trans books on my to-rec list: Laura Gao’s graphic memoir Messy Roots is awesome; I’m incredibly eager for Edward Underhill’s 2023 debut, Always the Almost; I’m in the middle of Racquel Marie’s Ophelia After All and am really excited for Anna Meriano’s It Sounds Like This. In terms of Indigenous writers, I’ll read anything Cherie Dimaline writes and the same goes hard for Alicia Elliott. For both Indigenous and queer/trans writers, my go-tos are Billy-Ray Belcourt and jaye simpson. Get to reading!