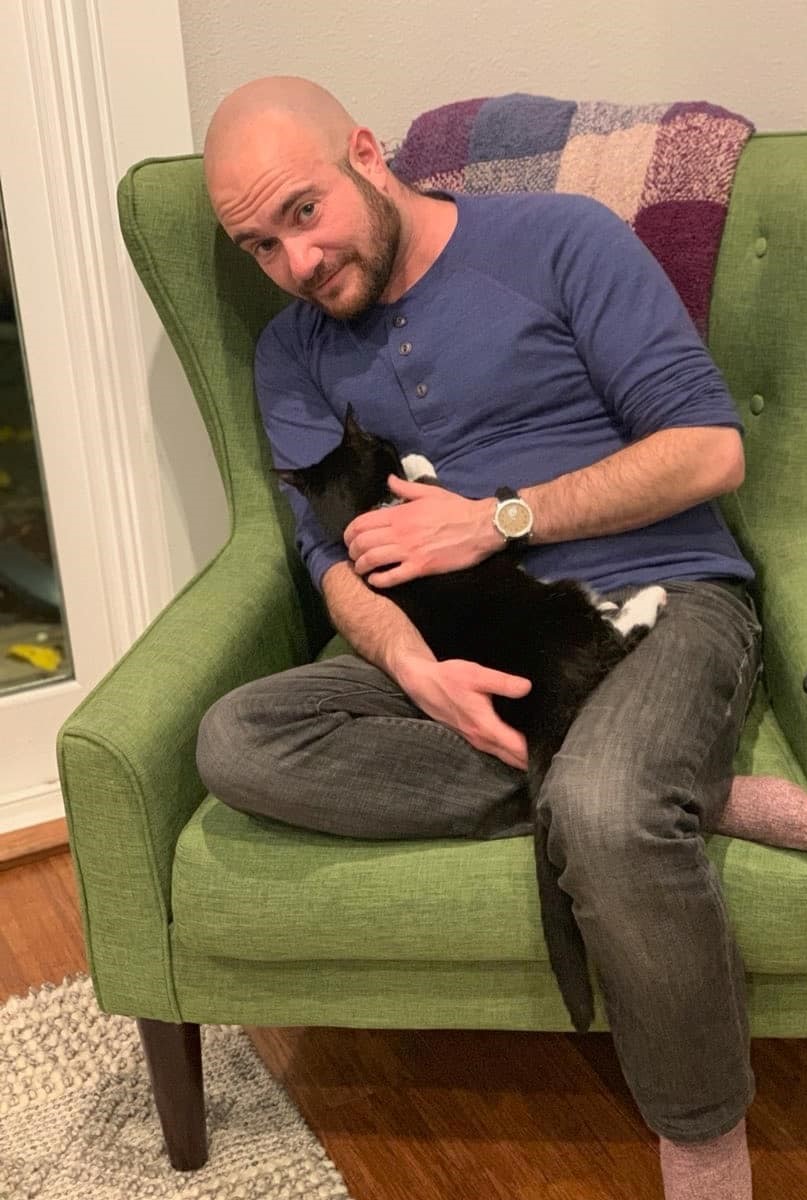 Kyle Lukoff is the author of many books for young readers. His debut middle-grade novel, Too Bright To See, received a Newbery Honor, the Stonewall award, and was a National Book Award finalist. His picture book When Aidan Became A Brother also won the Stonewall, and his book “Call Me Max” has been banned in schools across the country. He has forthcoming books about mermaids, vegetables, death, and lots of other topics. While becoming a writer he worked as a bookseller for ten years, and then nine more years as a school librarian. He hopes you’re having a nice day.

I had the opportunity to interview Kyle, which you can read below.

Thank you! I worked at Barnes and Noble for a decade before becoming a librarian, and now I’m a full-time writer. For years now my whole life has basically been “books” and “gay,” and that becomes more accurate all the time. A lot of my friends have been involved in Geeks OUT over the years.

How did you find yourself getting into children’s literature, both picture books, and middle grade? What drew you to these mediums?

I’ve worked on all different kinds of projects–fiction and non-fiction for adults, short stories, poetry, I just like to write. The first time I seriously tried to get published it was with a young adult manuscript, and when that didn’t go anywhere I decided to try submitting this picture book idea I came up with not long after college, which had been languishing in my inbox for about a decade. I love writing for kids and am really glad that’s where my career ended up, but it seems more like a matter of luck than intention.

As a writer, you are well-known for your work, When Aidan Became A Brother, one of the first picture books with a trans male lead. What was the inspiration for the story?

A couple of people had asked if I knew of any picture books with a trans boy character, and I was having a hard time thinking of one. The idea of writing one myself was always there, but I was resistant to the idea until this image of a little boy telling us about his room popped into my head. The story unfolded from there, but it took a long time before it became “Aidan.”

What does it mean for you as a writer having created this picture book as a trans man yourself?

I love knowing that when someone says “Can you recommend a picture book about a trans boy?” they can get one by an adult trans man who’s a professional writer. Now, all we need is more!

For those who are unfamiliar with how a picture book is made (or are hoping to write picture books themselves) how would you describe the process?

Like any writing project, you sit down and come up with the words you need to tell the story you want to tell. Though picture books have more in common with formalist poetry than, say, short stories. Another important point to note is that, unless you are also an illustrator, you will likely have no control over who illustrates it or what it looks like.

What are some of the best ways/resources to learn more about making a picture book?

“From Cover to Cover” by KT Horning. I also recommend reading as many picture books as you can, and carefully analyzing how they’re structured.

I am mostly influenced and inspired by the books I dislike, and the books I wish didn’t take up such prominent space on bookstore shelves or on reading lists. I want to supplant them with stories that I think are better, which include (but are certainly not limited to) my own.

So far no one has really asked me about the main character’s mom in “Different Kinds of Fruit,” who I wrote based on many of the queer fat femmes I have been lucky enough to know and love. I just think she’s so cool, and I really wanted Annabelle to look at her mom and think “I hope I look like her when I grow up.”

Aside from writing, what do you enjoy doing or learning about in your free time?

I love riding my bike and embarking on complicated cooking experiments. I used to do a lot of jigsaw puzzles, but not so much now that I live with my boyfriend. I still love to read and am always excited when I find a book that makes me feel like a reader again, not a writer half-analyzing the craft.

Are there any projects you are working on and at liberty to speak about?

I can’t talk about the one I am currently working on, but I can be excited about my first board book coming out next summer. It’s called AWAKE, ASLEEP and it’s a very complicated rhyme scheme that will be very easy to read aloud. I also have an epistolary picture book coming out called DEAR ZOE, about how to apologize. That one was hugely challenging and extremely fun.

What advice would you give to other aspiring writers, especially those who want to create and publish queer narratives, too?

Ooh I love Leah Johnson, her two YAs are spectacular and she has a middle grade coming out too! I’m also a huge fan of Lev Rosen‘s YA fiction, Lisa Bunker‘s middle grade, everything by Brandy Colbert, and I adored THE WITCH KING by H.E. Edgmon and am excited for the sequel.