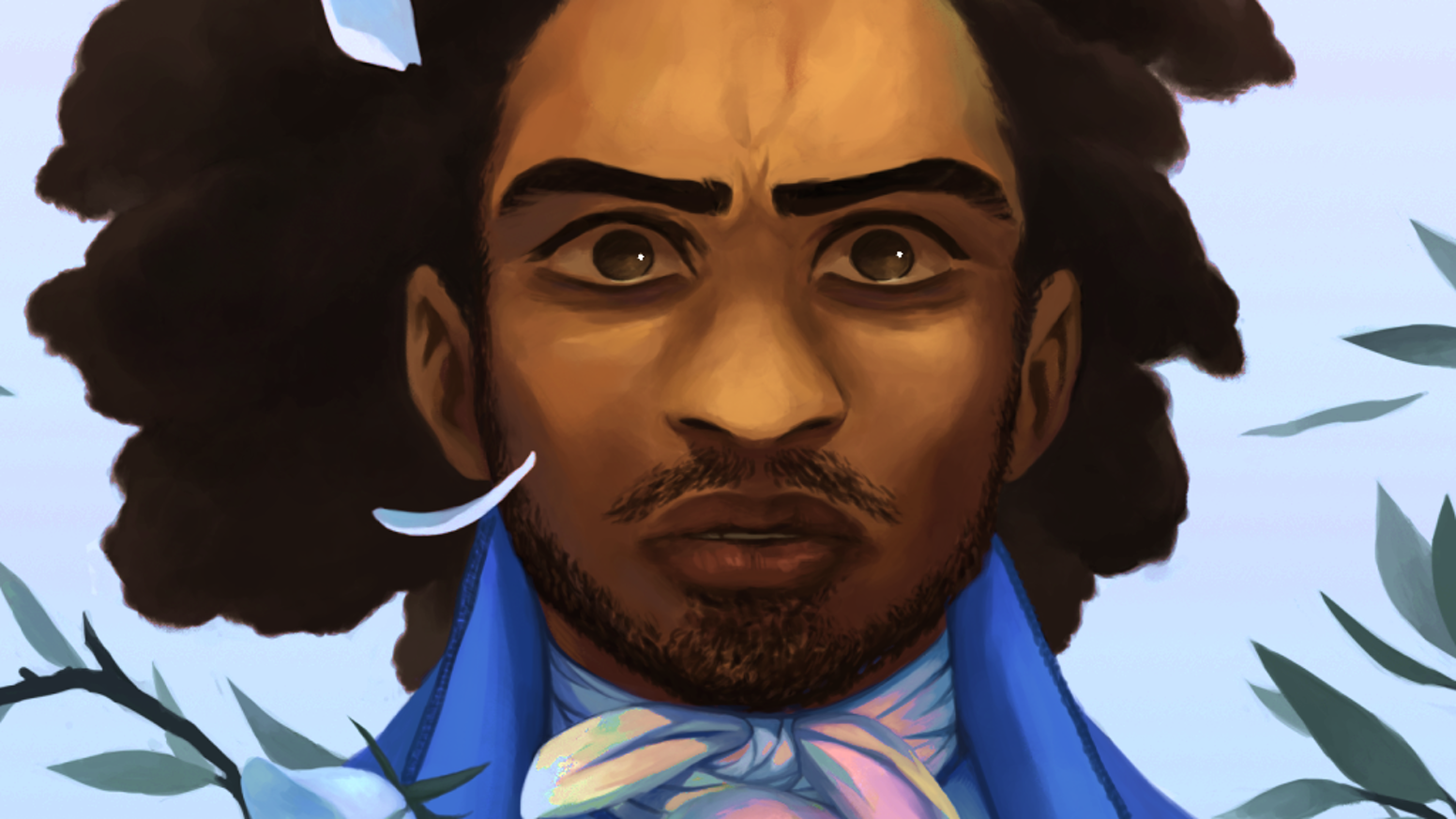 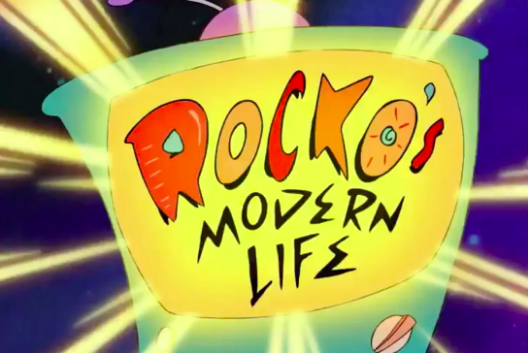 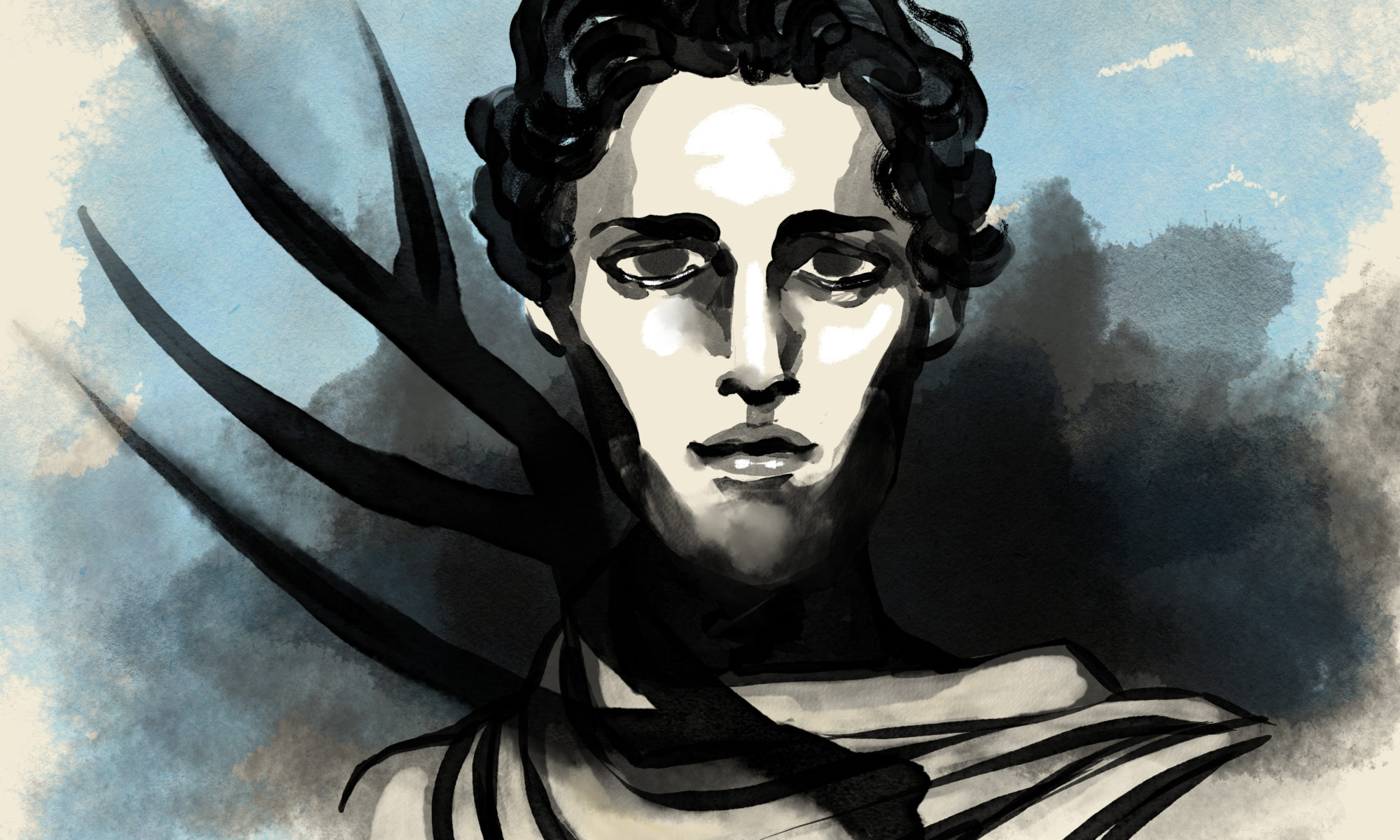 Hephaestion was the life partner and general of Alexander the Great, one of the most legendary conquerors in human history. I don’t use “life partner” as a veiled term for lover – he was never described in the texts we have as Alexander’s eromenos or erastes like his Persian courtesan, Bagoas. Hephaistion and Alexander are generally thought to have been lovers by most historians, but more importantly, they truly were partners in life. Hephaestion was a crucial part in Alexander’s success over a series of decades, not only in the role he played through military campaigns, but also as Alexander’s dearest confidant.

We do not have any evidence to suggest Hephaestion had any romantic or sexual partners at all, and only married a wife who had been assigned to him by Alexander as a political act to help integrate Persian culture into their court. As queer people who may have known a person larger than life as Alexander, we can extrapolate that if their relationship was romantic but not sexual, Hephaistion may have been asexual, and Alexander may have taken Bagoas as a sexual partner to fill those particular needs.

Several people who knew Alexander personally wrote of their experiences with him, but unfortunately these direct sources have been lost to us, and we only have third party accounts from narrators of varying degrees of reliability. Therefore any extrapolation we can make are just like any knowledge we have of him at all – extrapolations.

But it cannot be denied that Hephaestion was Alexander’s dearest and closest partner through life.

In 2012, a regal tomb in the Macedonian style was discovered in Northern Greece, as part of a larger complex being explored since the 1970s. The Kasta Tomb. They’re still researching and exploring just who’s remains are interned there, but in 2015 Hephaestion’s monogram was found.  The lead archeologist Katerina Peristeri says this is evidence that the whole tomb is a funerary monument for Hephaestion, built between 325–300 BC.

When Hephaestion died, Alexander began the downward emotional spiral that would eventually lead to his own death, 8 months later. Those 8 months were occupied with petitioning the oracle of Siwa to grant divine status to Hephaestion, which was granted. Hephaestion would be worshipped for centuries to come as a divine hero. Cults dedicated to honoring real people who had achieved divine status were eventually wiped out by the Christian empire in an unforgivable homogenization of spirituality from which we have yet to recover. The cult of Antinous, another king’s beloved who was worshipped by large swaths of people from various countries, was another victim of this eradication. Now, with a monument honoring Hephaestion discovered, we can take up that mantle again if we choose.

Regardless of your feelings about Alexander’s campaign (He was after all a conqueror, though arguably a conqueror of a different sort than those previously mentioned.) his glorification of Hephaestion in death was a lasting and spiritual tribute to same sex devotion.

The Kasta tomb is due to open to the public in 2020, and I will be watching for updates when the time comes. It is time we began to have our pilgrimage sites to visit, tragic and celebratory, modern and ancient, active and dormant. These are world-changing monuments to the power of our love, and they are part of our heritage as LGBT people. We are a people who have been violently and systematically isolated from spirituality, religion, and our own histories. It is time to reclaim them. If you visit this beautiful monument in 2020 or beyond, do not think of it as crumbling traces of a past civilization.  Think of it as a living monument built for you, by a man who wanted his beloved friend to be celebrated. 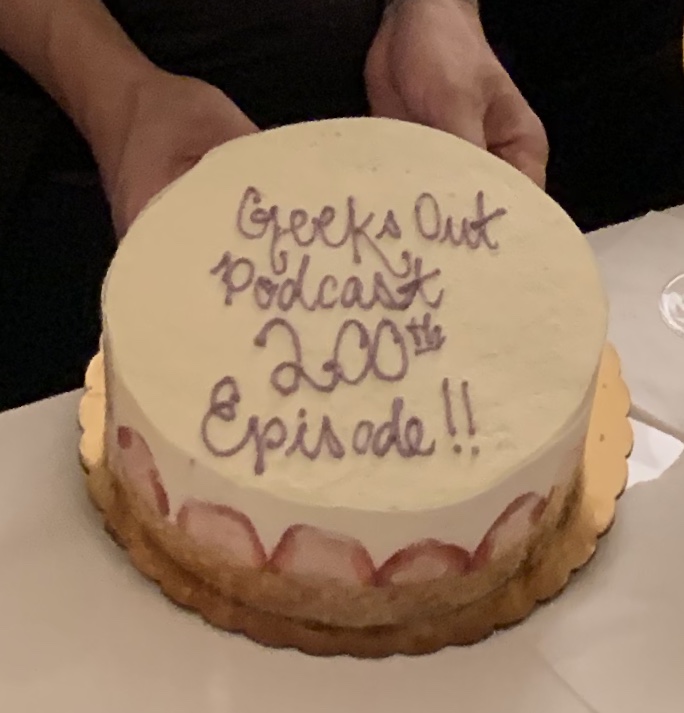 In this week’s extra special, super-sized episode of the Geeks OUT Podcast, Kevin is joined by Jon Herzog, and making his triumphant return is Graham Nolan, as they celebrate 200 episodes, reflect on the last 2 years, look to the future, and discuss all the news from SDCC in The Week in Geek. 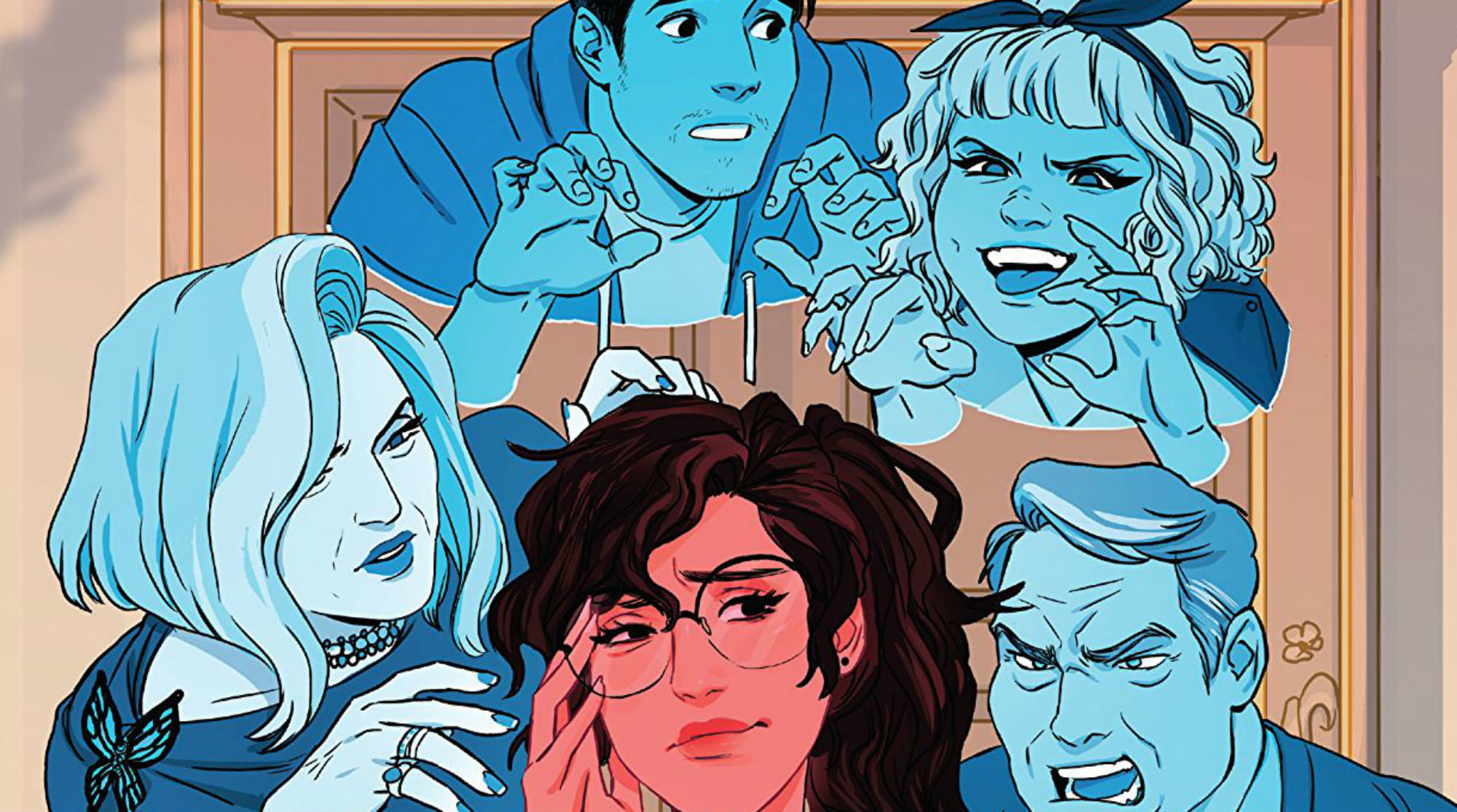 Moving to a new city is tough. Starting college is tough. Breaking up with your boyfriend and losing your best friend in a matter of weeks is also tough. So what’s college freshman Daphne to do? Just what anyone in this situation would do – find some new friends and use this as a chance for reinvention, to find oneself after being under the identities of others for way too long.

There’s just one difference: All her new friends are dead.

“Ghosted in L.A.” #1 does what any good series debut should do: introduces the characters, setting, and motivation for the central plot. And Sina Grace packs in a good deal of that exposition, without making the reader feel overwhelmed or rushed. In both overt and subtle ways we know just what we need to know about Daphne: she’s Jewish (which provides some conflict with her evangelical Christian roommate), she came to this college to follow her boyfriend, and she has a bit of a love-hate relationship with her best friend. Indeed, these are story elements seen time and again., But Grace does all this with humor and heart, so by the time Daphne’s main players in her life – – the boyfriend and the best friend – – are out of it, you want her to execute revenge by just simply living the best possible California girl life she can.

There’s only a brief introduction to the supernatural aspects of this story, as we meet the ghosts who become Daphne’s new best friends at the very end of this issue. But that’s okay. Right now, this is Daphne’s story, and we’ll only understand it (and her relationships) within her lens, so I’m more than okay with only just getting to meet our spectral friends in the final pages of the issue. There’s plenty of time to get to know Pam, Blair, and all the other ghosts of Rycroft Manor. We’re on the same journey of self-discovery as Daphne is, and Grace makes sure we’re going to enjoy every step of it.

Grace also assists artist Siobhan Keenan and colorist Cathy Le on artwork, and the three together give everything the Los Angeles polish and vibrancy, along with the character focus present in the script. Our art team plays with the passage of time in ways that subtly advance our script. The shift in color from sepia toned Montana to Technicolor Los Angeles presents a natural shift in story that is a visual buffet. Daphne’s wait for her classmates in the common room of the dorm shows that long wait not just in the change in the sky, but in the change in the population in the room, heightening the sense of isolation she’s starting to feel, that isolation which certainly steers what will happen next.

The art has the look and feel of another BOOM! Studios property, “Giant Days,” but with a little more realism in face and body features. There’s fair representation of all kinds of body types and ethnicities, from one ghost rocking the dad bod to another with a beautiful natural afro. The art team does well at providing corporeal forms for the non-corporeal residents, coloring them in shades of blue to distinguish them as ghosts from the story’s human elements, but still having them retain the basic forms and shapes of humanity. For the most part, backgrounds are sparse, and with the character focus of this issue, that’s okay.

Now there isn’t much to be hinted at in terms of queer content in this first issue, save for a passing look at what appears to be two men in a relationship on Daphne’s college roommate Michelle’s laptop. (Of course I’m left wondering if Michelle herself is closeted, given this and the strong Christian iconography in her dorm room.) What I do know from Sina Grace’s run on “Iceman” is how he slowly and organically introduced the revelations of Bobby Drake’s sexuality. No doubt if he has such elements planned out for this story, he’ll do the same here.

When people ask me what I like most about Sina Grace’s work, I always say that it’s his ability to write heart and humor in equal measure, allowing each to play off of the other, and to do so in a way that appeals to all ages. “Ghosted in L.A.” continues that trend, and adds in a fun twist to refresh already established story tropes. With BOOM! Studios’s “Giant Days” ending later this year, this looks to be the heir apparent to fill the Daisy, Susan, and Esther shaped hole in your heart. 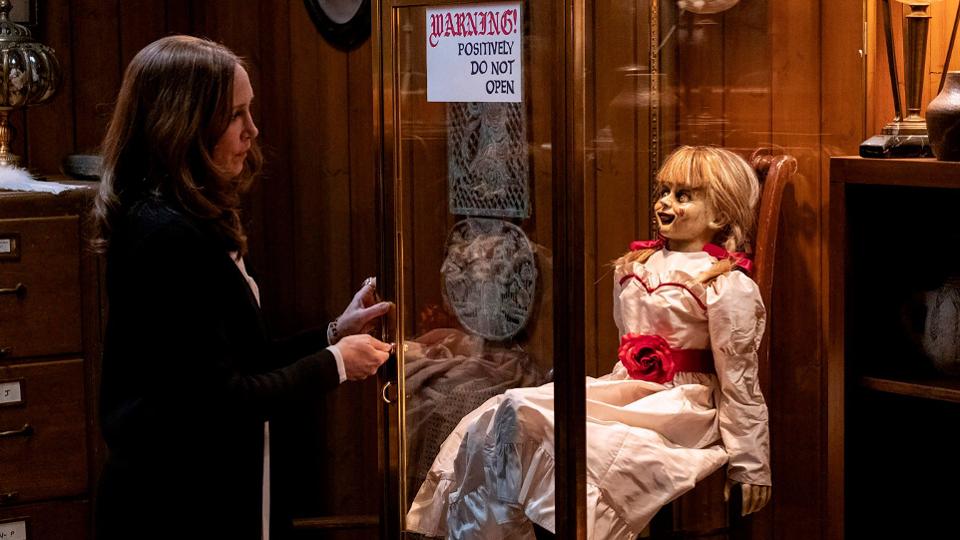 In this week’s extended episode of the Geeks OUT Podcast, Kevin is joined by J.W. Crump, as they discuss Annabelle Comes Home, WarnerMedia’s forthcoming HBO Max, and celebrate Angelica Ross joining AHS: 1984 in This Week in Queer.

New trailer for Dora and the Lost City of Gold 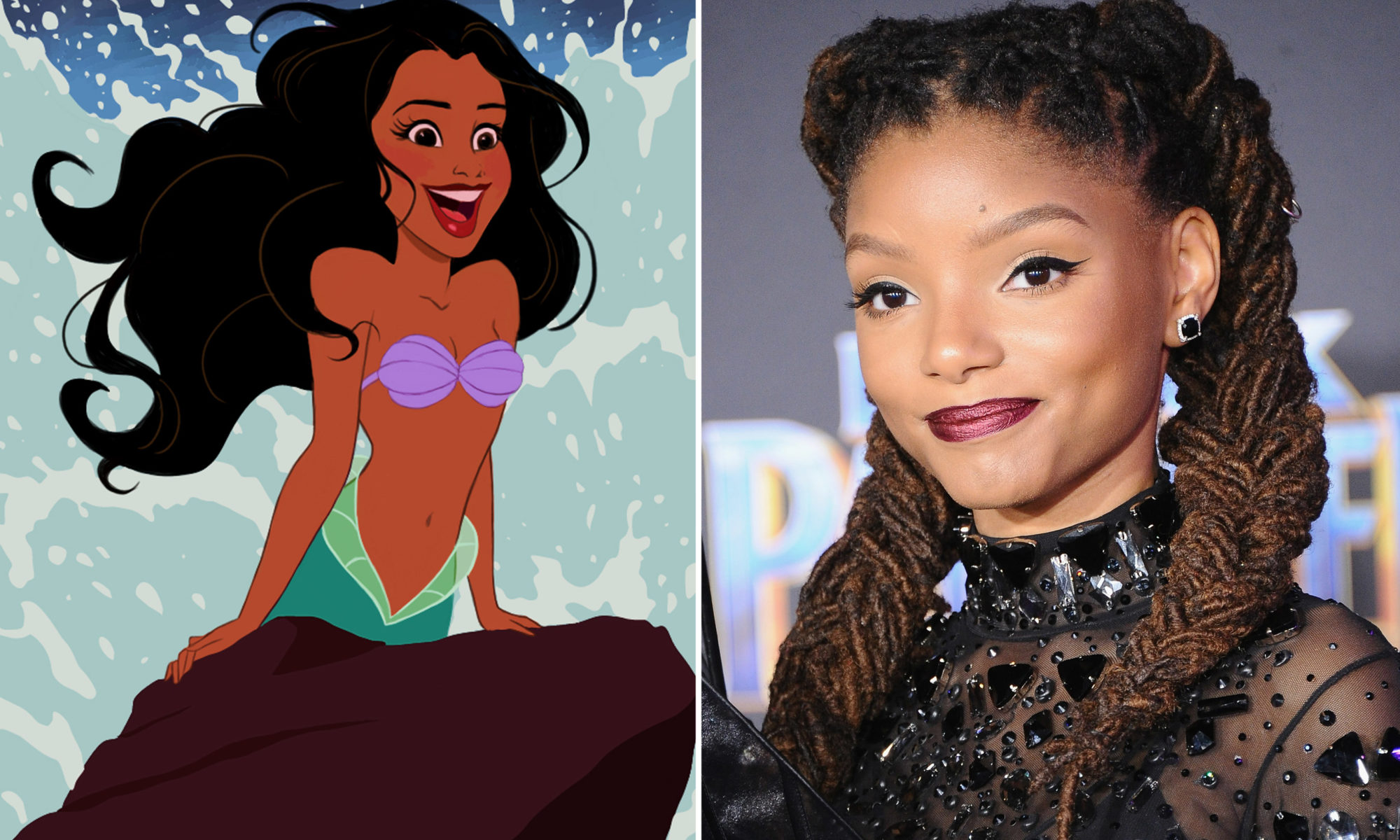 In this week’s episode of the Geeks OUT Podcast, Kevin is joined by Lynaé DePriest, as they discuss Halle Bailey playing Ariel in the new remake of The Little Mermaid, give their hot takes on the trailer for the live-action Mulan, and celebrate Aneesh Sheth playing the MCU’s first trans character in Jessica Jones in This Week in Queer.

New trailer for The Terror: Infamy