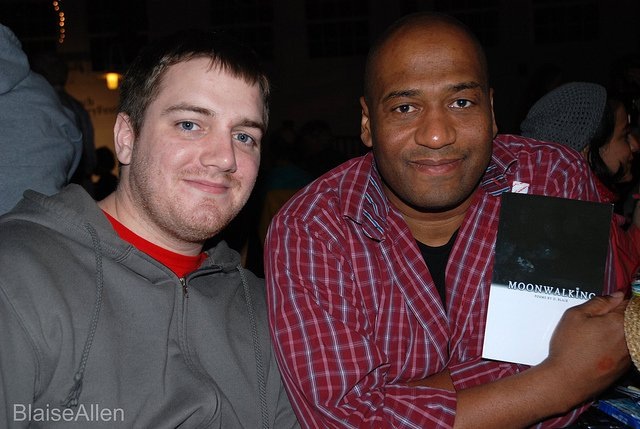 Seven years ago, I started working on a comic book with my good friend Reed Olsen. It would go on to become the series Dream Crasher, which we are now self-publishing through Kickstarter. Dream Crasher is a 12-chapter story about a group of children who survive a bizarre cataclysmic event and find themselves navigating a strange new world filled with angry ghosts, strange beasts made from human parts, and interdimensional parasites that feed on their dreams. At its core, Dream Crasher is also a story about overcoming trauma, the fight for autonomy, and creating a world where we all have a chance to define our own destiny.

One year into our new comic creating process, Reed and I were on fire. Kickstarter was just beginning to reveal itself as an vehicle for indie comics. Chapter one was drawn and painted, and the work on chapter two had already begun. I had found my voice in writing, and had found a brilliant creative partner in Reed. We had momentum. I was excited for what the future held.

Running parallel to all of this, I found myself very much in love for the first time in my life. Blair changed my jaded views on that four letter word. He challenged me to be a better person. He made me smile every time he laughed at his own jokes. He gave me confidence in the creative choices I was making. He was also a talented writer and musician in his own right, and he encouraged me on this project when it was still in its early stages. To say my life was perfect would be a lie, but I was the happiest I had been in a long time.

All of this changed when Blair died in the summer of 2011. My whole world fell to pieces. The unexpected trauma, the weight of the grief, and the subsequent depression and healing all took their toll in various ways. I’ve written extensively about the grief and the healing over the years since. This tragedy permeated every aspect of my life, and the still-unnamed Dream Crasher was no exception. Comics were put on hold. I scribbled ideas in notebooks and thought about the project from time to time, but in the end it took more than six months before I sat down to work again. And even then, the work was slow. It took another year after that before I finished the script for the third chapter. It felt like starting from scratch and learning how to write again. In hindsight, this was in no small part due to a fresh perspective I had on my main character, Amalie.

I had been following Kurt Vonnegut’s sixth rule to a T. I was being a sadist and making awful things happen to my main character, but I hadn’t given a second thought to how it was affecting her. I hadn’t thought about how she processed the world around her, or who she was because of it. Through my own grief, I suddenly understood her on a whole new level. In many ways, Amalie is a representation of how strong I wish I could be. She’s lost everything she once held dear but has never given in to despair. She’s not unshakeable–she’s persistent. She’s not fearless–she’s brave. She’s a survivor in every sense of the word.

In his own writing, Blair had a knack for extracting beauty from the darkest of places. His example inspired me to do the same. I began to think of this bleak new world as less of a graveyard and more like fertile soil. I realized that it’s not a story about the world that’s been destroyed, but rather the new one that is taking its place. It’s about the children who have an opportunity to shape it and truly make it their own. As dismal as the world can seem sometimes, there are still dreams worth fighting for. Beneath its dystopian exterior, Dream Crasher is a story about finding the last bit of light in a world that’s gone dark and protecting it with every fiber of our being. Even when the powers that be are stacked against us. Even when the cause seems hopeless.

As devastating as Blair’s death was, I didn’t let it stop me. That in and of itself is a cause worth celebrating. Reed and I both had numerous opportunities to put this project down and quietly walk away from it, and no one would have thought less of us for doing so. We didn’t. I’m grateful to say that, in the face obstacles we never could have anticipated, we persisted.

Today, we are on the cusp of completing the first arc of the series. That first arc, which parallels my own story of grief, captures the resilience of a character who has outgrown my original idea of her. A character who grew and inspired me in ways I never expected. I have never worked harder on any single piece of art, and I couldn’t be more excited to share it with the world. Like many up-and-coming creators, we have launched a Kickstarter Campaign. With it, we hope to raise funds to cover the cost of printing, lettering, and designing the book itself. We’re offering a variety of rewards to any backers, ranging from digital chapters for as little as $4, the physical book for $25, and several pieces of original artwork from the series for $100. We’re off to solid start. and we’ve already made it farther than seemed possible just a few years ago. The campaign runs until October 6, 2017.