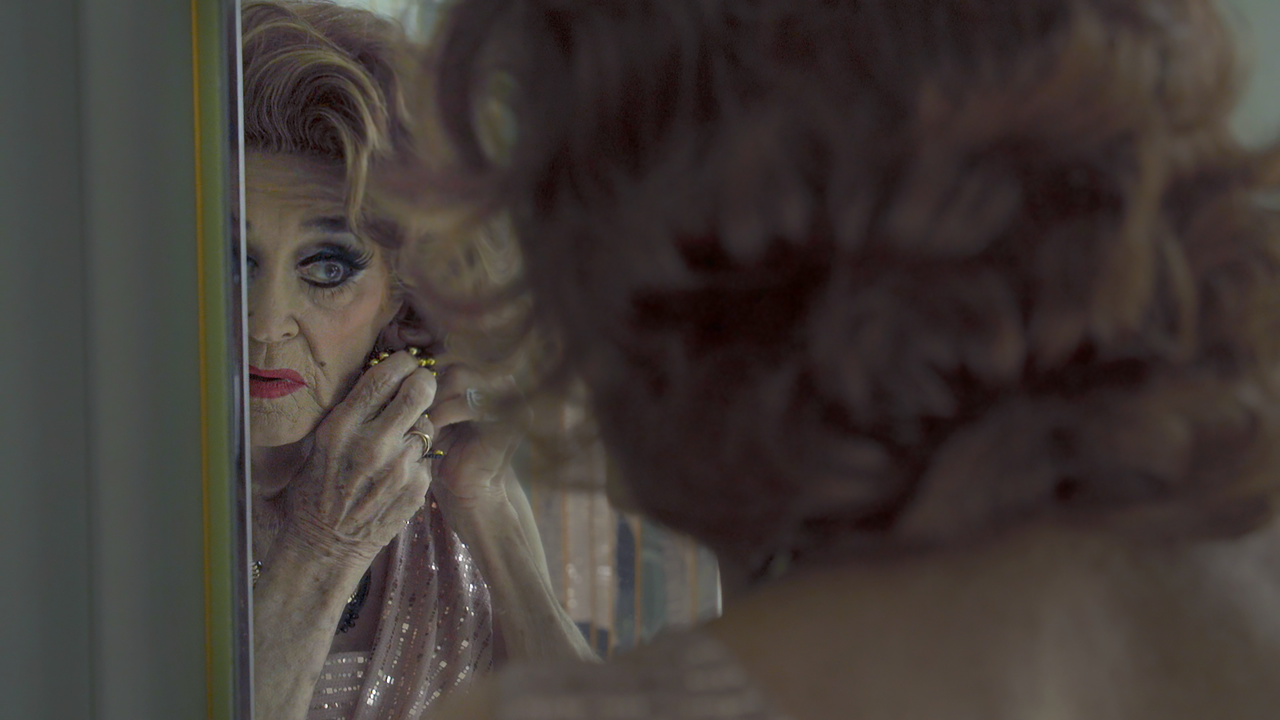 It’s rather poignant that I watched P.S. Burn This Letter Please on the day Heritage of Pride announced they were cancelling all Pride events in NYC.  Sad news, to be sure, but Michael Seligman and Jennifer Tiexieria’s excellent documentary about a circle of drag queens in 1950s New York City demonstrates that Pride was a year-round state of mind even before the Stonewall Riots.  Inspired by a box of letters discovered in a Los Angeles storage unit, the filmmakers have crafted a vibrant, colorful experience made up of patched together elements—it’s something like a handmade costume, appropriate given the subject matter.

Animated script written over floral backgrounds, accompanied by dynamic voiceovers by the likes of Cole Escola and Adam Faison, bring the letters to life.  (Credit designer and animator Grant Nellessen.) Filled with vintage slang that evokes the time, the letters are the heart and soul of the movie—and punctuated with eminently quotable dialogue.  “Just a demented note to say hello.”  “I never felt so cunty.  And Mary, I love it.”

The documentary is enhanced by some equally compelling interviews with some of the letter writers and their contemporaries.  Particularly dynamic is Claude Diaz, who’s hilarious in his recollections of life as a drag queen but also thoughtful and introspective—at one point he’s utterly overwhelmed with emotion and sadness for a time forever lost.  There’s also insightful commentary by authors and historians like Esther Newton, who comments on fascinating dynamics like those at Club 82, a Manhattan nightclub where straights—including such luminaries as Warren Beatty, Natalie Wood, and the Kennedys—came to see drag queens perform.  She characterizes it as “performance by stigmatized people for normals.”  The stigma and adversity faced by drag queens is explored throughout the film.  One participant describes them as being “revered and reviled” for representing both what people loved and loathed about being gay.  Robert Bouvard expresses his distaste for the term “drag queen” itself, preferring “female mimic” or “female impersonator,” though conceding that drag queen is now commonplace and has a function if “it means you can understand what I’m talking about.”

The scene introducing the club is emblematic of the skill with which directors Seligman and Tiexieria have crafted their film—the pair use great tricks to bring to life what it was like to descend the long staircase into this hidden world.  They vividly convey many aspects of queer life in the 50s—“trick hotels,” for instance, were rooms rented so that queens could change away from the judgmental eyes of family and friends.  Along the way there are some surprising twists and turns, like a high-end wig heist Diaz and a friend pulled at the Metropolitan Opera House and the experience of Terry Noel, whose transition and surgery were provided free of charge thanks to a co-owner of Club 82.  Noel also provides an eloquent and heartfelt explanation of transition: “To me it’s not mutilation, it’s rearrangement.  So I can live my life as I wish.”

P.S. Burn This Letter Please concludes with a nod to the broader LGBTQ rights movement and an acknowledgement of the pioneering role these subjects inadvertently played while simply living their lives; it’s a bit rushed, perhaps, but important to note.  There are also postscripts about each of the writers—including a surprising and fun revelation about “Daphne”’s identity—and the identity of who they were all writing to. The movie is a vivid and vital testimony—and a profoundly meaningful slice of gay history.

The Tribeca Film Festival was postponed, but films have been made available for members of press and industry.