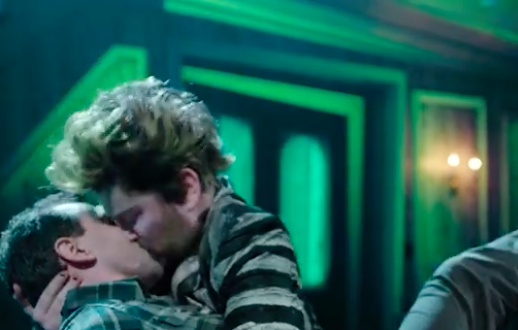 An interview with Tim Burton I watched at my university’s library (which had an enviable collection from different directors) hit me deep and hard, with this sentiment:

It doesn’t matter how successful you become – if you have ever been an outcast, the feeling of being an outcast never goes away.

This feeling was communicated to me so beautifully, even through the limitations of white, cisnormative, heterosexual stories that Burton sticks to. Why do so many marginalized groups resonate so fiercely and deeply with Tim Burton’s narratives, when he puts little to no effort to actually represent marginalized groups in his casting choices?

It was with this love and preparation in my heart that I saw Beetlejuice the Musical, and was completely delighted.

Stylistically, Beetlejuice The Musical takes Burton’s trademark blend of Edward Gorey and Walt Disney influences, and skews it more toward an absurdist John Waters direction. The style, both visual and performative, matters more than any perceived philosophy of story, and that’s not necessarily a bad thing.

Others will write exhaustively, I’m sure, about the adaptation from film to stage, but I’d like to touch on what spoke to me personally.

I grew up with the Beetlejuice cartoon series, which I would run home after school to catch the last 15 minutes of. I hardly remember the referential, pun-laden humor or rushed animation – the important thing about it was the friendship between Lydia and BJ. Unlike any other children’s media at the time, the relationship was not familial or romantic, it was a beautiful and rebellious friendship between a young girl and a male ghost. It was strangely wholesome and comforting to see a kid character who could summon a monster on command.

When I was old enough to watch the film, I was disappointed that Lydia and Beetlejuice weren’t friends, and the story didn’t involve their anti-authoritarian alliance, but instead the uncomfortable peril of forced marriage.

Not only does Broadway the Musical resurrect the mischievous bonding of Lydia and BJ (Sophia Anne Caruso and Alex Brightman), it also undercuts the marriage plot by featuring an 11th hour number about the absurd menace of creepy old guys feeling entitled to love and affection. It’s one of the many aspects that the source material could have never been self-aware enough to feature. The script is more satirical of white nonsense than anything Burton could ever do, but the white audience is very much in on the joke, and white characters always deliver it. It lacks some of the edge it might have had with any characters of color in the main cast.

Beetlejuice the Musical uses the language of cartoon shorthand. For example, Lydia’s presumably fashionable parents want to force her into a frilly pink dress to look less strange and unusual in front of guests. It’s a visual that’s about 60 years out of date but still works as shorthand for the ongoing problem of children being pressured to conform to an acceptable version of femininity.

Another cartoon shorthand is something queer viewers are intimately familiar with – the queer coded villain. In this particular show, the villain title is debatable, but the title of Monster is not. Part of Beetlejuice’s villainy is his inability to respect personal boundaries. Few of Disney’s villains are without this trait. He is constantly groping, catcalling, and manipulating both Barbara and Adam (Kerry Butler and Rob McClure), who act and sing as though they came out of a normal Broadway musical about the complex and sympathetic lives of privileged white heterosexuals and have found themselves on this lurid green and purple stage by accident.

The thing that brings this queer coded male-kissing-for-laughs shorthand into a more genuine place is Beetlejuice’s sincerity in these affections. Adam eventually uses Beetlejuice’s affection for him to manipulate him (and is joined separately by ghost wife Barbara) and it works. Because Beetlejuice isn’t just queer-coded – he is a queer cartoon. He is fiendishly hungry to be alive again, to be loved, and to be admired, and that hunger applies to both men and women.

Is an uncontrollable personification of the id good queer representation? No – but I do not ascribe to the rule that queers need to be paragons of virtue in order to be valid. Such a character would be out of place in this musical. This show is not about genuine human conditions. (And when genuine themes of grief do occur in the show, it’s honestly a little jarring.) The show is about irreverent attitudes about death and the afterlife. It’s about a giant sand worm you can ride like a mechanical bull, and living cartoons reciting absurdist gags, and watching your favorite Harry Belafonte song rake through human puppets like they’re being struck by lightning. The fact that queerness has an unapologetic home in the main character is powerful. Cheap gags aren’t at our expense as outsiders, they include us. And I love that.

Queer coded villains are out of date because we don’t need code anymore – what we need is more unapologetic queer monsters, breaking the 4th wall and howling from the beyond.

I came away with a genuine affection for every character in this bonkers show, delivered by some really wonderful performances and enhanced by the sexiest puppets and lighting design I’ve seen in a very long time. It touched on all the things I loved about both the Beetlejuice animated series and the film, paying homage to both, but evolving into its own sort of monster.

Speaking of queer monsters…. that sand worm though. I’d ride that thing all the way to the netherworld.