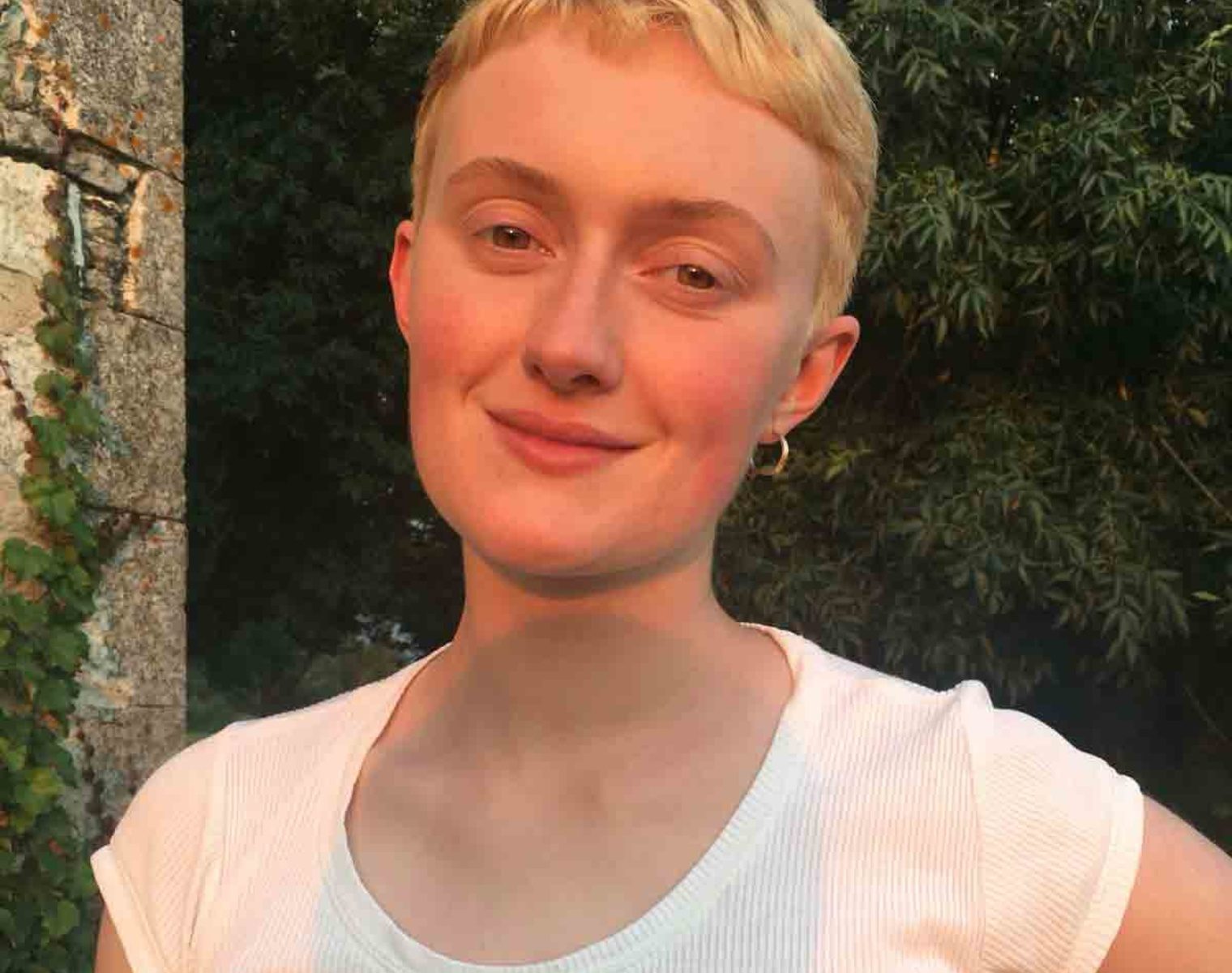 Eleanor Crewes is a London based illustrator, she graduated from Illustration at UAL in 2016. Her debut graphic novel The Times I Knew I Was Gay was released in April 2018 and has already taken her to exhibit at Toronto Comic Arts Festival and receive review from websites like The Quietus and Broken Frontier. She specialises in graphic storytelling and enjoys mixing autobiography into her projects wherever she can.

I have the opportunity to interview Eleanor, which you can read below.

Hey, thanks for having me! I’m Eleanor Crewes. I live in London with my partner and I draw graphic novels!

How did you find yourself getting into comics? What draws you in about this medium of storytelling?

I was introduced to comics by my Dad, he’d always get me single issues like Mary Jane Loves Spiderman and graphic novels like Courtney Crumrin and The Night Things. I’d enjoy reading them, but mostly I liked copying the characters into my own comic books. It was fun to reimagine the stories from my own perspective. I’d pick characters that I felt represented me and my friends, and draw them in scenarios that were exciting to me—most of the time this was just ripping off the original comic, but it made it feel like it was mine. What I enjoy about making comics hasn’t changed much since then, although all the material I write is now officially my own, not stolen!

Who would you say are some of your artistic influences? Are there any artists or books you look to for inspiration?

When I went to Art School my attention moved completely away from comics for about four years, and I spent most of that time pouring over children’s picture books instead. This now means that my illustration inspirations are a happy muddle, so what I look to depends on the project I have on at the time. That being said, the artists I will always love are Matt Rockefeller, Carson Ellis, Loïc Locatelli-Kournwsky and Isabelle Arsenault.

Your first book, The Times I Knew I Was Gay, is a graphic memoir of your evolution as a gay person, and discovering your queer identity. How did it feel translating your memories onto the page?

The first book that really inspired me to make my own work was Vanessa Davis’ Make Me a Woman. I read this just after coming out and although it didn’t follow the same narrative, I felt comforted reading about Venessa’s sloppy teenage kisses, and connected with her experiences of not feeling totally sure in your own body. The Times I Knew I Was Gay started as tiny drawings I made on scrap that explored me in different scenarios saying “I’m so gay!”  Making them gave me a route to consider all the times I maybe could have know that I was gay, and that led me to asking myself: ‘why didn’t you know?’ — and that felt like something I really needed to explore. I really enjoyed making The Times I Knew I Was Gay, especially once I was working with my my editors. I was surprised by how many more memories came up for me, but I’d already had such a warm and kind response to the indie publication (in 2018),  that it made me want to give back to the readers who had already supported the story.

Was there anything you wished you had included in the book that you didn’t get a chance to?

When I was working on the first chapter of The Times I Knew I Was Gay I got to draw lots of memories from my early childhood, particularly a section about how my Dad would take me to Camden market to buy cool T-shirt’s from the stands that were run by punks with Mohawks and the biggest platform boots you’d ever see. When I completed the first full re-drafting of The Times I Knew I Was Gay it was over 400 pages and we had to cut at least 100 of those out. I always liked how warm and gentle a lot of those drawings were.

A large part of The Times I Knew I Was Gay includes an experience I’m sure is familiar to many queer people, such as fighting heteronormativty in order to discover and accept one’s queerness. Would you mind expanding on that a bit here?

I think this fight is a big part of my long experience of coming out. As I detail in the book, I tried and tried again to fancy boys and to dress a certain way. I really wanted to want these things, but in the end I couldn’t. It’s funny, because heteronormativity is the pressure that I would have been feeling, but at the time that’s not the word I would have used for that massive struggle. I would have seen it as ‘growing up’ or ‘being a girl’ or ‘teenage angst’. Which is also why heteronormativity is not just a trap or a fight for queer people, but for everyone. Heteronormativity is a vicious system that tries to trap all of us! I just feel lucky that I could keep on fighting.

What are some of your favorite parts of making comics and the creative writing process?

I used to be really averse to colour, but since pushing my visual style I am now a true fan of colouring in! Once I’ve drawn out all of the lines and markers, I put on my audiobook and can colour in for hours, that’s a real happy place.

What advice might you give to those hoping to make comics?

Don’t give yourself too many hard and fast rules. The Times I Knew I Was Gay started out as a zine that I hand stitched and delivered to shops by bike, and the style of the book—no panels, black and white illustrations and very few speech bubbles—has not changed!

Aside from comics, what would you say are some of your other hobbies and interests?

Cooking! I love to cook, my mother’s family are Italian and she’s definitely passed down the food bug to me and my brother.

Can you tell us a bit about your latest book, Lilla the Accidental Witch? You mentioned in the book, that the story is personal, not only for its queer themes, but for being inspired by your family background? Could you discuss your familial connection and your inspiration?

When I was little I would spend every summer staying with my family in Italy. Everything about these memories of the four, uninterrupted weeks out in the hills with my Aunt is so idyllic. Most days were spent playing Playstation with  my brother and cousin for hours; but it was also magical because of the conversations I’d have with my Aunt. She’d read to me from her childhood book of ghost stories, on long drives she’d tell me about the local ghosts and witches, and out in the fields she’d help me collect wild herbs and flowers that I’d later turn into spells. With all those stories washing around my head, looking out at the vast landscape and traipsing through woodland—the house is so high up you can watch the weather change in the next town over, before it reaches you—I’d say it would be hard not to be inspired. Once I’d written The Times I Knew I Was Gay I knew I wanted to move into fiction, and the pleasure I found in drawing those scenes from my early childhood (the ones that didn’t make it into the finished book), crept over into Lilla the Accidental Witch. When I first pitched the story, I said: “This is the coming out I wish I’d had, when I was small I knew I was different, but I thought that difference was being a witch.”

I’d have to say ‘how did you find your drawing style?’ And the answer to that is – by coming out! It’s probably a big cliche, but before I was out of my tightly locked closet I would jump between as many artistic styles as I did fashion trends. I really didn’t know what I liked or how to find it, and I’d go from creating photo realistic portraits (or as good as) to block printing abstract shapes overnight. Once I came out it was like I’d taken the longest, hottest bath of my life and had finally relaxed. That relaxation also affected my drawing, my style became looser and my idea of what I wanted also changed. I stopped being so hard on myself and cultivated what I was actually good at.

At the moment I’m continuing to flex my fantasy muscles, but I’m going right back to what I’ve always loved, and that’s ghost stories. I’m working on a collection of short stories in graphic format. My aim is to combine what I admire about the old masters (M.R. James, Edith Wharton) and combine that visually with my own illustrative style. I’m enjoying making this new work so much.

Finally, what queer comics/books would you recommend to the readers of Geeks OUT?

So many! Recently I finished The Magic Fish by Trung Le Nguyen, but I also loved In The Dream House by Carmen Maria Machado. There’s the Heartstopper series by Alice Oseman, Jillian and Mariko Tamaki’s SKIM which is one of my favourites, as is Jen Wang’s The Prince and The Dressmaker. At the moment I’ve been listening to Plain Bad Heroines by Emily M. Danforth while I work and it’s more than I could have asked for from a book!