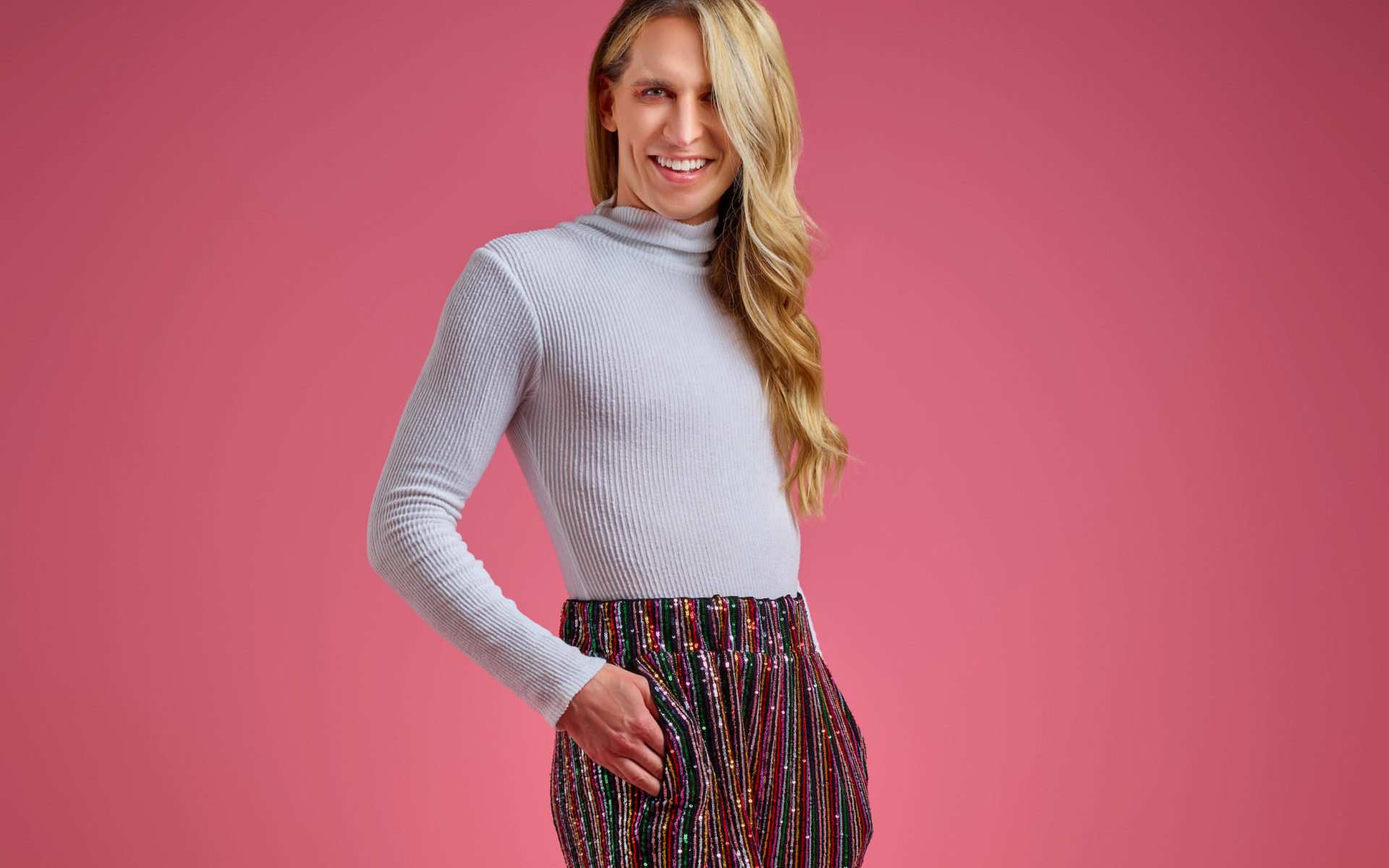 Jason June (it’s a two-name first name, like Mary-Kate without the hyphen or the Olsen twin) is a writer mermaid who loves to create picture books that mix the flamboyantly wacky with the slightly dark, and young adult contemporary queer rom-coms full of love and lust and hijinks. When not writing, JJ zips about Austin, Texas, with his Pomeranian, Pom Brokaw.  His work includes the queer-inclusive Valentine’s Day picture book, Porcupine Cupid; the whimsical chapter book series, Mermicorn Island; and the YA rom-coms, Jay’s Gay Agenda (out now) and Out of the Blue (May 31, 2022).

I had the opportunity to interview Jason June, which you can read below.

Thanks so much for having me! My name is Jason June (it’s a two-name first name, like Mary-Kate but without the hyphen or the Olsen twin), and I’m the author of Jay’s Gay Agenda and the upcoming Out of the Blue. I love writing YA featuring the love lives and shenanigans of queer characters!

I’ve been writing my entire life! I actually started by writing down word for word the dialogue in the movie Labyrinth starring David Bowie and Jennifer Connelly. I was probably seven years old and completely robsessed with that movie. But in that moment I realized the magic of a movie started with the words in a script. And then I became completely smitten with words in general, and read like my life depended on it. My love for YA came about a few years ago, after a few failed attempts at publishing middle grade fantasy. I needed a palate cleanser to just clear my mind, and became totally wrapped up in contemporary YA and how there is magic in real life that doesn’t have to be literal fairies or witches or potions, but the sort of electric buzzing that occurs when we’re creating strong connections in our teen years.

Where did the inspiration and the impetus to write your debut book, Jay’s Gay Agenda come from? (Also I’m very curious how you came up with the title.)

JGA is very loosely based on my experiences as the only out queer kid at my rural eastern Washington high school. While I didn’t keep my gay hopes and dreams in a list, I did have a diary that detailed all I couldn’t wait to experience when I finally met another gay person. I didn’t get to jump into a queer community until college, but I used that diary as the seed for the book along with my Type-A Virgo tendencies of list-making, which led to the creation of the titular Gay Agenda. I specifically wanted Gay Agenda in the title because I think it’s hysterical that some people think there is this Queer Master Plan, and instead wanted to show how each person in the LGBTQIA+ community has their own individual relationship wants and goals, and the chaos and joy and magic that can come about when you actually start accomplishing them.

One element that people have seemed to responded to is the open discussion about sex positivity in Jay’s Gay Agenda? (Also on a small note, as an asexual person, thanks for the brief asexual acknowledgement.)

I’m really happy that people have responded so well to the sex positivity in the book. Going in, I knew that was something I wanted to include in this story because starting around the age of 15, I was thinking about sex constantly, but everywhere I looked I was told that my desire was wrong. So JGA was made to be an antidote to that, to show gay teens that as long as everything is safe and consensual, their physical desires are just as beautiful as anyone else’s. It’s part of human connection for so many of us! And thank you for the thanks! I think it’s important to note in any sex positive discussion that all sexualities are fabulous!

Something I’ve noticed with a lot of queer authors is often they write the books that they wished their younger selves would have wanted. Was this in any way true for you?

Absolutely! I needed to know I wasn’t alone when I was a teen in my relationship and physical hopes and dreams, but minus a selection of books I could count on less than one hand, I couldn’t find many books that I felt truly represented me. It’s why I pretty much stopped reading for enjoyment in high school and didn’t really get back into it until after college. It’s now super important to me to write stories that will always center a queer protagonist and queer relationships.

Rainbow Boys by Alex Sanchez was the first time I read a book where I was like, “Okay, wait! I relate to this!” It’s actually one of the books I was thinking of above where there was representation I could connect with. And there was Marco on Degrassi!

To keep at it! You’re going to hear no so many times. No, an agent doesn’t want to take you on as a client; no, an editor doesn’t think your story is right for their imprint; no, a reader doesn’t like your book. But you’ve got to keep going! There are going to be those times that people say yes, they absolutely love what you’re writing, or relate to your story, or can’t wait for what you’re coming out with next. So anytime you hear a no, know that a yes is out there for you too, and you’ve got to keep writing for those yeses.

Chikorita is the best Pokémon and that’s all there is to it.

I honestly can’t think of one! Interviewers like you are so good at coming up with questions that let me discuss the heart of my work, so I don’t feel like I haven’t been able to talk about the things that mean the most to me. So thank you!

Yes! My second novel with HarperTeen comes out in May and it’s called Out of the Blue. It’s a contemporary YA with light magical elements featuring queer merpeople! It’s dual POV between a merperson (Crest, pronounced like the actual sound of a cresting wave, which is impossible for humans to say, so they go by the human name Ross while on land) who has to come on land for a month to help a human, and the recently dumped lifeguard (Sean) that Crest fake dates to help Sean save face in front of Sean’s ex. And we all know what happens when fake dating ensues! This is about romance helping us discover parts of ourselves we hadn’t yet realized, and it also explores the whole emotional journey of having to choose between love for a person and love for your home when you literally have to choose one over the other. I’m so excited for it!

I love love love book talking! Here are a few that I have absolutely adored this year:

Jonny Garza Villa’s FIFTEEN HUNDRED MILES FROM THE SUN. It follows Julián as he gets drunk and accidentally comes out online, unleashing a whole storm of excitement (a Cutie McCuterson DMs him after coming out) and anxiety (having to still stay in the closet when it comes to his dad). Jonny has so perfectly found that balance of jubilation at being yourself after you come out that can come hand in hand with fear when we’re still in an environment that’s not safe. It’s so beautifully done, with both laugh-out-loud and heart-clutching moments.

Ashley Shuttleworth’s A DARK AND HOLLOW STAR. It it is an epic high fantasy told from four POVs, and they’re all queer! It was so amazing to get all this magical action and high stakes and be surrounded by queerness!

Emery Lee’s MEET CUTE DIARY. In this we follow Noah, a transgender teen, who runs a blog full of trans happily ever afters. But, all the stories are fiction. And when a troll calls Noah out for making up stories, Noah starts a whole fake-dating escapade to get real-life material that teaches him so much about relationships and what makes a good partner. I loved it so much and everyone should read it!

Stephan Lee’s K-POP CONFIDENTIAL in which we follow Candace as she moves to Seoul to train to become a K-Pop idol! I loved every last second of this and felt like I could see the choreography and hear the music. And I just finished the sequel, K-POP REVOLUTION, which comes out in spring 2022, and everyone should preorder it now!